A public talk by Lama Zopa Rinpoche in Brisbane, Australia in April 1991. Rinpoche spoke about the purpose of life and developing the correct attitude toward death.

Click on the audio links to listen online and read along with the unedited transcript. 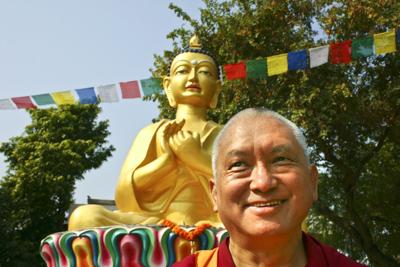 So, the main subject that we are going to reflect or what I try to practice a little bit and sometimes when I'm not lazy, when I can remember, to share our understanding or the essence that I learned a little, that which is a little from the teaching of the Omniscient One, the teaching of the Buddha. So if there's something practical, if there's something useful one find by analyzing then that is to apply to one's own life.

So now, what is the mind? The phenomenon, that which is shapeless, colorless, formless, non-substantial, that which nature is clear, perceiving objects, like the mirror that things can reflect, the mirror can give clear reflection of things, of whatever is in front. So like that, the mind able to clarify the object, to that mind the object is able to be clearly appeared, whatever the object, the phenomenon is, to the mind the object clearly appeared. So, perceiving this object like this. So this is the conventional, there are two natures of the mind, one is conventional nature, one is the ultimate nature. So this description that is the conventional nature.

However so very strong feeling, as one remember yesterday, like that one get very strong feeling, so also it is possible to remember through, it is mentioned through hypnosis also remembers However then through development of the mind in meditation, through meditation developing the mind, then when one reach the mind on certain level of path, after achieving the meditation that is called calm abiding, that you can concentrate for years of for eons, as long as one wishes, that one can concentrate on one object without any obstacles, without any distraction, without breaking the concentration, that wherever you put your mind, wherever one places one's own mind able to stay on that object like a mountain, like having put a mountain on there, so able to stay the mind on that object. Which is combined with, such this one-pointed concentration combined with rapturous ecstasy, extremely refined body and mind, the rapturous ecstasy, great joy or bliss, so combined with that, able to do this concentration with such experiences.

So however then after having achieved such as this calm abiding meditation then there is power to be able to see future and past, so also those times there's possibility those meditators can remember and then higher, as one actualize the path higher and higher then can see more and more past, more and more future, then also by practicing tantra, the secret mantra, there is a method to, there is a practice called Six Yogas of Naropa, it is a method to actualize, to stop the gross consciousness, gross thoughts and to actualize the extremely subtle consciousness, then able to use this extremely subtle consciousness to meditate, to actualize the path, However able to do extensive benefits for other sentient beings, for other living beings. So the practitioners, the meditators, who actualize this, the extremely subtle mind then also especially after having achieved these realizations, then able to have these mind powers, capacities. Can remember thousands of lives before, thousands of years ago, where you were in the world, which country, like that you were, that oneself was disciple of, thousands of years ago, one of those saints or those holy beings who happened on this earth, so one can remember such as the great yogi Milarepa, who became fully enlightened in one life, within a few years, in a brief lifetime of degenerated time.

So some meditators who actualized this, there happened meditators who actualized these realizations then through the tantric practice, path, then one can remember that that person was existing that time or in such-and-such a place. So However can see future and past. So this is just talking how the mind, the capacity of the mind gets developed higher and higher then able to see these many other phenomena, which weren't able to see before when the mind wasn't developed. But then when the mind is developed higher and higher then able to see more and more past and future, those many other phenomena, which this present ordinary undeveloped mind cannot see.

Similar, before one went to university one does not understand, one has no understanding of all those subjects, those phenomena, but by going to university, studying then one is able to understand, see all those other subjects, all those other phenomena. Similar, through meditation, like this gradually then those who are fully developed the mind in wisdom, understanding then can see, can directly see all the existence, all the phenomena, every single existence, past, present, future, everything that which exists in the past, that which will happen in the future and all the phenomena that which are existing now.

So, then also that time, as one has complete power, perfect power, so able to manifest…