I hope you are well.

CPMT meeting
As I mentioned in last month’s e-letter, I recently attended the FPMT meeting at Institut Vajra Yogini, in France. The picture here, taken by my wife Wendy, captures Rinpoche giving a spontaneous 15 minute teaching at a stupa about how, when you see flowers, you should not just admire them but offer them--at a minimum just bring your guru to mind and mentally offer the flowers.

While at CPMT I gave a brief presentation of the state of the LYWA. You can read about our current projects here. Please let me know if you have any questions. Thank you for your kind interest.

In the meantime, the latest FPMT news has been issued. 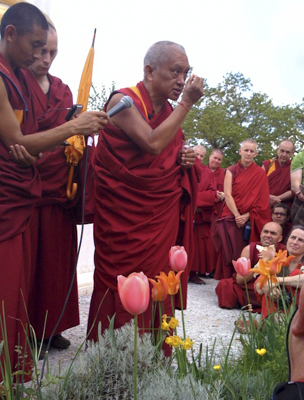 Lama Zopa Rinpoche's Mani Retreat
Our new book, Lama Zopa Rinpoche’s The Heart of the Path, continues to inspire people. We were able to offer Rinpoche more than 200 copies, which he gave to people at the CPMT meeting and the Mani Retreat that is going on at Institut Vajra Yogini now.

This retreat continues a series of Mani retreats that Rinpoche has inspired. The first of these was held at Chenrezig Institute in Australia in 2000, and the LYWA book Teachings from the Mani Retreat chronicles the teachings given by Rinpoche during this retreat. This book is currently out of print, but you can read the entire book online or download a pdf.

What's New on the Web
We continue to make improvements and add features to our website. Thanks to all of you who have offered helpful feedback since we launched our new site last October. Our newest feature allows website visitors to search our Archive database, the database which holds information about every teaching currently stored in the Archive. Perhaps you attended a teaching and are curious as to whether or not it's ever been transcribed or published; or perhaps you want to know if there's a teaching on a certain topic or practice; our new search screen will provide all this and more. Check it out!

We have just posted the audio recordings of Lama Zopa Rinpoche's teachings before a Mitukpa initiation given in Taiwan in 2007. As always, they are accompanied by the unedited transcripts. The recording of the remainder of the teachings given over the two days was not good enough to publish online, but it was able to be transcribed, so we've also published a lightly edited version of all the teachings for you to read online. (All were transcribed and edited by Ven. Ailsa Cameron.)

Good Projects to Support
Thank you so much to all those who kindly responded to our special appeal for the Kalachakra stupa I’m trying to build at Kurukulla Center, where I’m also director. We are getting closer to our target; please help out if you can. Helping build a stupa is of great benefit.

And, we recently heard about the Buddhist Declaration on Climate Change which can be found on www.ecobuddhism.org. His Holiness the Dalai Lama was the first to sign this important document, and you can visit the website to add your signature to the document as well.

Thank you for your kindness. Here’s a great teaching by Lama Zopa Rinpoche on the mind.

The Nature of Mind 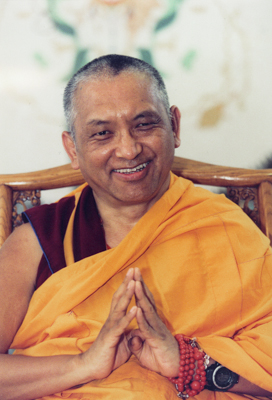 What is the mind? It is nothing other than what is merely imputed by the mind in dependence upon the phenomenon that has no color, no shape, and no material substance. It is different from the body, which has color and shape and is substantial. The consciousness of the body, or the body sense, experiences objects, but the body itself doesn’t perform that function.

Clearly perceiving objects is what defines the mind. The basic definition of mind is that which is clear and able to perceive objects. Clear doesn’t necessarily mean that the way the mind sees an object accords with reality. Here clear means simply seeing an object clearly, whether rightly or wrongly. For example, from a distance somebody in a department store might see a store mannequin as a real person, because the shape and posture of the body are like those of a normal person. Somebody could look at a mannequin and think, “Oh, there’s a person there!” They give the label “person” to the mannequin because it has the shape of a person, and they then believe in their label. The mannequin then appears to them as a real person, even though in reality there’s no actual person there, from the top of the head down to the toes. It’s simply a mannequin. An actual person doesn’t exist there. First of all the person sees the base, the shape of a human body; because of that they label “person” and believe in that label. It then appears to them as a person. Even though that appearance is not true, it is a clear appearance to their mind.

Another example is someone with bile disease* seeing a white snow mountain as yellow in color. Even though the appearance of a yellow mountain is not true, it’s clear to that hallucinated mind. It is similar with the effects of datura and other drugs. Because of the effect of a drug, someone can see the whole ground as crawling worms. Even though it is not true, what appears is clear to that hallucinated mind.

Here in the definition of mind, clear doesn’t necessarily mean that the object you’re seeing accords with reality. Whether it’s a false object or a true one, it appears clearly to the mind.

Besides achieving liberation, ultimate happiness for self, we can completely cease even the subtle obscurations, the imprints left on our mental continuum by the ignorance holding the concept of true existence and other disturbing thoughts. In this way our mind can become completely pure, without any faults. It becomes omniscient mind, which can directly see all past, present, and future existence.

Because of this clear light nature of the mind, we have every hope of obtaining any happiness that we want. No matter how strong our ignorance, anger, desire, self-cherishing, and other delusions are and no matter how much heavy negative karma we have created, these things are not permanent; all these obscurations are temporary. Like fog in the sky, they are not permanent; they will not always be there. They are dependent arisings. In dependence upon causes and conditions, fog happens and obscures the sun or moon and the sky. Then, in dependence upon other causes and conditions, such as the karma of sentient beings and wind, the fog goes away.

In a similar way, no matter how strong our delusions are or how much heavy negative karma we have created, like fog in the sky or dirt in a cloth or dust on a mirror, they are not permanent. Our mind is temporarily obscured, because the nature of our mind is not one, or mixed, with our delusions and negative karma. No matter how black with dirt a cloth is, because the cloth is not one with the dirt, it can always be cleaned. No matter how thick the dust on a mirror is, the mirror can always be cleaned. Like this, no matter how strong our delusions are and how heavy the negative karma we have created, since our mind is not one with them, there is always hope; there is always the potential for our mind to be separated from these obscurations. Our mind can become completely pure, free from all these obscurations, all these causes of suffering.

By developing method, or compassion, along with this wisdom realizing the nature of the I and the mind, you are able to completely cease even the subtle obscurations of the mind. In this way your mind becomes completely free from all faults and perfected in all realizations. Such a mind is a fully enlightened mind, a buddha’s mind.

*Note: Tibetan medicine regards diseases as disturbances of the basic humors of wind, bile, and phlegm. Bile disorders are related to the liver.