I hope you are well. Thank you for receiving and reading our monthly e-letter.

Thanks to your kindness, things are going well here. We appreciate the generosity of those who responded to our recent appeal. As that contains news of our current activities I won’t repeat it here. We are, however, counting on your continued generous support to be able to accomplish our projects on behalf of the kind sentient beings, so if you have not yet been able to respond, please take a moment to do so and kindly let me know. Thank you so much. 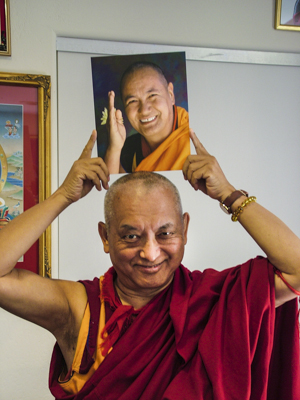 We recently received the following notice from the FPMT International Office. As you probably know, the Archive is affiliated with the FPMT and Lama Zopa Rinpoche is our spiritual head. This advice came from Khadro-la, a female oracle from Tibet who has a strong spiritual connection with Rinpoche. If you can help out with these practices for Rinpoche’s good health and long life, please do so. Thank you again.

As you know, from time to time, we check for Rinpoche’s health and obstacles in general.

Khadro-la’s advice is for all the students of Rinpoche to recite 700,000 Mitukpa mantras. This is important to do from the side of the students. The end date for the practice is Monday 13 July 2009.

The Mitrugpa practice for Rinpoche’s long life is downloadable. [Find links in the FPMT Catalogue.]

Another thing we have to do remove obstacles is to make a 14-foot high statue of Nagarjuna. It will be made in either stone or bronze and will be sited on Maitreya Land in Bodhgaya. The cost is being finalized, but you can make a donation for the Nagarjuna Statue in Bodhgaya here.

Please then dedicate strongly for Rinpoche to have long, healthy and stable life, and for the immediate removal of any obstacle to the accomplishment of His holy wishes.

New Audio On the Web
We have just posted the audio recordings of Lama Zopa Rinpoche's teachings titled "Guru Shakyamuni Buddha's Kindness" given in Taiwan in 2007. Included is a section on making offerings to the Buddha, the purpose of a Dharma center, and the benefits of carrying the Golden Light Sutra or Diamond Cutter Sutra. As always, they are accompanied by the unedited transcripts.

Prayers For World Peace
Lama Zopa Rinpoche has specifically recommended the recitation of the Sutra of Golden Light to help all of us develop the qualities of loving kindness and compassion in the face of these increasingly difficult and violent times. The worldwide community of nuns and monks of International Mahayana Institute (IMI) will offer recitations and prayers, including the Sutra of Golden Light as part of International Sangha Day on July 25th, 2009. You can participate in the recitation, make dedications or offer support.

Thank you again for your kind support, and once more, we leave you with another teaching by Lama Zopa Rinpoche.

The Nature of Ignorance 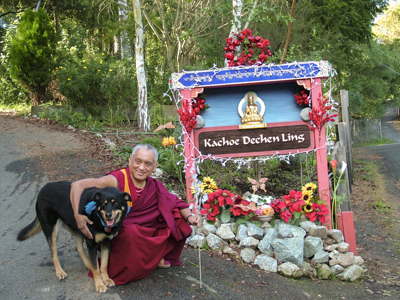 There’s no basis at all for the concept of true existence, this ignorance that is the root of the whole of samsara. On the basis of ignorance and attachment and the karma motivated by them, we experience all the sufferings of the six realms. The concept of true existence, however, is completely unnecessary. Things do not exist independently but in dependence upon causes and conditions and upon their base and the mind that labels them. While things are empty of existing from their own side, they appear to have existence from their own side, and we believe that appearance to be true. By believing in the concept of true existence, of a truly existent I and truly existent aggregates we are creating the root of samsara, the root of suffering. We are creating ignorance when we start to believe as true the things that appear to our hallucinated mind as having existence from their own side.

By realizing emptiness, the ultimate nature of the I and the aggregates, we eradicate this ignorance, this false thought. As long as we don’t do this, delusions will arise and motivate karma, and we will experience the sufferings of the six realms. We will always be going through the cycle of death and rebirth, which will then have no end. There is no liberation until we realize emptiness, which eliminates this ignorance.

Nobody forces us to believe in this ignorance. There’s nobody saying, "I’ll kill you if you don’t believe that things are truly existent!" There’s not a single reason that we should believe this false view. It’s something we have no need for, and it’s something that doesn’t make any sense. It’s childish nonsense. During beginningless rebirths, however, we have been living with this ignorance, which believes to be true these things appearing to us as independent, as having existence from their own side, even though they are merely labeled.

When we analyze the very root cause of all suffering, we find it is senseless. Without any real reason, we simply believe in a false view. Even though things do not exist from their own side, they appear to us to exist that way, and we believe this false view to be true. Things appear that way due to our hallucinated mind, just as due to the effects of drugs on their senses, people can hear others talking even when there’s nobody there or see things upside down or in different colors. Due to the effects of disease, drugs, or mantra power, people can see many things that aren’t true, and then believe them to be true.

This ignorance interferes in your bringing all sentient beings to liberation and to the everlasting happiness of full enlightenment. You can’t reveal the right path from experience unless you have the wisdom realizing emptiness. By not allowing you to develop this wisdom, this ignorance harms you and all sentient beings, directly or indirectly. This ignorance not knowing the nature of the I is much more harmful than millions of atomic bombs. If we were to remove this ignorance, this concept of a truly existent I and truly existent aggregates, and cease its imprint, no matter how many atomic bombs there were, they couldn’t harm us. Why not? Because we wouldn’t have this gross, suffering body. Without this ignorance and its imprint, there’s no cause to have such a body, which is suffering in nature and can be harmed. No matter how many atomic bombs or other weapons there were, they couldn’t give us the slightest harm as we wouldn’t have this suffering body, and there’s no way physical weapons could harm our mind, which is formless, colorless, shapeless.

The danger from atomic bombs and other external weapons is nothing compared to the danger from our ignorance, which believes, while the I, aggregates, and so forth do not exist from their own side, that they do exist from their own side. The most dangerous thing is to follow this ignorance for a day, an hour, a minute, or even a second. If we don’t have negative karma, weapons alone can’t cause us to be born in the lower realms. But if we have negative karma, even if we aren’t killed by weapons, we will be born in the lower realms, where there is the heaviest suffering. This ignorance of ultimate nature is the one that created this suffering body and mind, the container for so many problems.

Therefore, we need to realize emptiness. To wait even one second to do this is too long—it’s like waiting for eons. The concept of true existence doesn’t allow you to bring the numberless sentient beings to liberation and to full enlightenment, and it makes you continuously harm other sentient beings, directly or indirectly. Without thinking about others but just about yourself, you receive unbelievable harm from this ignorance. It causes you to be born in the six realms and tortures you with all these sufferings. No matter how much poison we could swallow, the harm from that would be nothing compared to the harm from this ignorance that we have been keeping in our mental continuum. It’s like keeping in our mind something that is more harmful than numberless atomic bombs and all other weapons, more harmful than all external poisons. This ignorance gives us harm numberless times greater than that from all external dangers.