Thank you for reading our August e-letter. Please feel free to share it with others.

Off to the Printers!

Also, as good citizens of Mother Earth, we’re going to get involved with the Green Press Initiative for future books. Even though it will cost a little more money to print our books, the planet’s worth it. I’ll give you more information on this next time.

Our Next DVD Release

We’re also moving ahead with some new Lama Yeshe DVDs. His Vajrasattva tsog commentary is in design and hopefully will soon be in production and we’re also working on Lama’s two 1983 public talks entitled Anxiety in the Nuclear Age, and a couple of interviews conducted by the Meridian Trust in 1982. [See Bringing Dharma to the West.] An edited excerpt from these interviews is this month’s teaching, below. 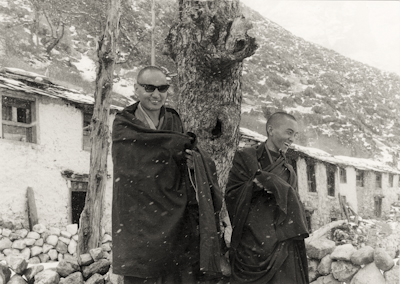 We’re delighted to announce the launch of our redesigned and updated online Photo Gallery, and it's filled with wonderful photos like the one on the left. We’ve assiduously been trying to collect as many early FPMT photos as we can—Lama Yeshe, Lama Zopa Rinpoche, other lamas, Kopan course group photos and any other photos of historical interest—and I’d like to thank very much those kind photographers who have sent us their precious original photos, negatives and slides.

And I would like to appeal to anybody who has photos that we should add to our archive to please contact me: we could have you send us your photos insured on our FedEx account and we'll return them to you safely along with a CD containing your scans.

Also, as you are browsing through the photo gallery if you have any information regarding any of the photos—such as photographer, date, names of people in the photos, etc.—please contact me as well. Thank you so much.

We've recently posted Lama Zopa Rinpoche's advice on The Benefits of Building a Monastery. This month's updates to Rinpoche's Online Advice Book include new advices in the Misfortune section, Practices for Success, along with advice for how to handle business and work problems, and natural disasters. We now have over 360 advices posted.

...is another excerpt from Lama Zopa Rinpoche's teachings in Barcelona, Spain in September 2005. These teachings are lively and engaging introductory talks—visit our Online Recordings page to take a listen.

And thank you again for your interest and support…we couldn’t do it without you!

How We Started Teaching Dharma to Westerners

Lama Yeshe was asked: How did you first get involved in teaching Dharma to Western people? 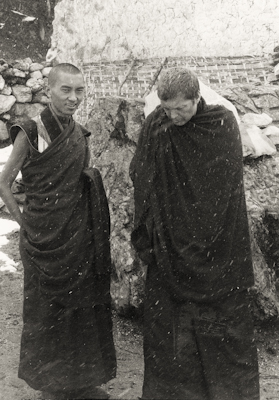 I began teaching Westerners in the late 1960s. At that time I was based at the Tibetan refugee camp of Buxa Duar, West Bengal, India, where I’d lived since 1959, following the Chinese invasion of Tibet. Lama Zopa Rinpoche was one of my students there and from his time in Tibet had a connection with the monks of Samten Chöling Monastery at Ghoom, near Darjeeling. They invited us to come there for a holiday, which was the first one I’d had since arriving at the Buxa “concentration camp.”

So there we were, and one morning a monk knocked at our door and said, “Lama Zopa’s friend has come to see him.” It was Zina Rachevsky, a Russian-American woman, who was supposed to be a princess or something.

She said that she’d come to the East seeking peace and liberation and asked me how they could be found. I was kind of shocked because I’d never expected Westerners to be interested in liberation or enlightenment. For me, that was a first. I thought, “This is something strange but very special.” Of course, I did have some idea of what Westerners were, but obviously it was a Tibetan projection! So, despite my surprise I thought I should check to see if she was really sincere or not.

I started to answer her questions as best I could, according my ability, but after an hour she said she had to go back to where she was staying in Darjeeling, about thirty minutes away by jeep. However, as she was leaving she asked, “Can I come back tomorrow?” I said, “All right.”

So she came back at the same time the next day and again asked various questions, which I tried to answer. Somehow she got some kind of message from the teachings I gave her, became very enthusiastic, and again asked if she could come back the following day.

In this way she came for teachings every day for a week or more. Finally she said, “It’s very expensive for me to come here every day by jeep. Could you please come to stay at my place and give teachings there?”

At first I was a little bit scared; I didn’t quite know what to make of this Western lady. But her sincerity made me believe in her and encouraged me to go, so I said OK and Lama Zopa and I moved to her house. She lived in the main cottage and we stayed in a small hut outside, in the garden, quite separate from where she lived.

We gave her lessons every day, from about nine or ten o’clock until midday, which she liked very much, and finished up spending about nine months there; quite a long time. Then she had visa problems and got into trouble with the Indian police. 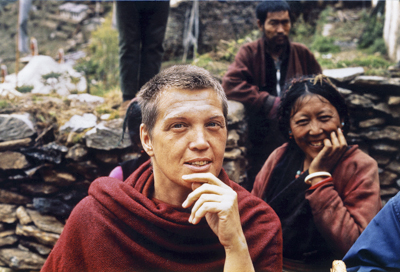 She was a very strong character, unusually strong for a woman, and told the police that they were pigs and should stay away from her place. This rather annoyed them and they tried to hassle her but there wasn’t much they could do until they decided to label her a Russia spy. Then they put a lot of pressure on her and kicked her out of Darjeeling.

She finished up having to leave India and went to Ceylon. She wanted Lama Zopa and me to go with her to continue teaching her Dharma and meditation, but in order to travel we needed His Holiness the Dalai Lama’s permission and some kind of refugee document from the Indian government. It took about a year to organize all that, but we finally got His Holiness’s permission and an Identity Certificate through the Tibetan Bureau in New Delhi and we were ready to go.

Zina came up from Ceylon to meet us in New Delhi but in the meantime had decided to become a nun. I thought that was a good idea but since according to the vinaya, novice ordination requires the participation of at least four monks in addition to the preceptor, Lama Zopa and I couldn’t do it ourselves, so we went to Dharamsala to ask His Holiness the Dalai Lama. He couldn’t do it either but arranged for some other lamas to ordain her and in that way Zina became a nun.

For some reason I felt uneasy about going to Ceylon so I suggested to Zina that we go to Nepal instead. It was close to Tibet and beautiful, peaceful and quiet. Environment is very important and I thought that since Zina was now a nun she needed to be where she could lead a simple life. Taking ordination alone is not enough; after leaving life in the big samsara you need time to adjust to life as a monk or nun and your surroundings are very important in this. 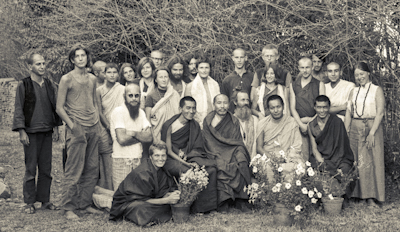 Zina agreed, so the three of us went to Nepal. After a while her friends started coming to us for teachings and after we’d been in Nepal for a couple of years, we moved to Kopan. She kept requesting that we give a group meditation course, so in March 1971 Lama Zopa finally gave the first Kopan course and that was really the beginning of our involvement in the Western world.

So you can see that we started off slowly. We thought teaching Dharma to Westerners would be beneficial but we didn’t hurriedly push; it was a gradual evolution. We took our time observing and checking intensively whether Buddhism worked for the Western mind or not. When we were confident that it did, we offered our first course. About twenty people attended the first couple of courses and then the numbers kept doubling until about two hundred and fifty people came to the sixth. After that it leveled out at around two hundred.

So that’s how we started teaching Dharma to Westerners.