His Holiness is the Light to Purify Negativities

The complete interviews are available on a DVD, Bringing Dharma to the West, which can be ordered through our online store. You can also view it on our YouTube channel. 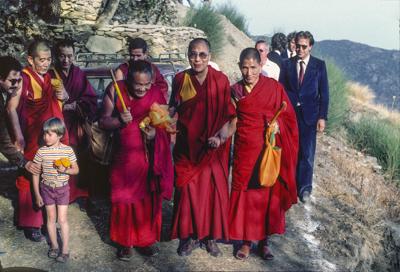 ...His Holiness the Dalai Lama is the figure, the top leader politically and spiritually. Tibetans believe he is a great leader in this world—which is very rare! For His Holiness to come to the Western world is the insurance that Buddhism has been established culturally in the various countries and centers, that Buddhism is not some kind of trip. It is insurance that Buddhism is something cultural, something truly and sincerely involved in serious work, and is becoming part of the future for the Western world. I really feel that His Holiness coming to Europe is like Guru Shakyamuni coming to this earth to make firm the Dharma, the wisdom-light that is the path to liberation for all European people. Now, with His Holiness the Dalai Lama's blessing, and all the European Dharma students and those teachers who work dedicating their lives to Western people, Dharma quickly becomes more significant and successful.

To bring the Dharma to the Western world is not an easy job. There are a lot of misconceptions within the Western environment, and they have to be addressed and purified by coming to understand the true picture of Buddhism. I think His Holiness is the light to purify all kinds of negativities that are vibrating—objectifying Buddhism and, within Buddhist circles, holding on to sectarianism. I think His Holiness is the completely equanimous representative of not only the Tibetan tradition, but of the entire world’s religions: he is the universal representative.

Therefore, especially at this critical time, I think His Holiness the Dalai Lama's coming is very important for all people, not only for religious people, but even non-religious people, to make the world community harmonious. His Holiness' message, from my understanding when listening to his lectures, is universal love, universal compassion, and for each of us to take universal responsibility to bring universal people to happiness. Somehow everybody understands that message.

I think the Dalai Lama's coming is an incredible, incredible blessing. I and the Western people really feel something very unusual now that His Holiness has come. There is some kind of incredible harmony and good understanding between everyone in our global community. I think this understanding brings better peace, liberation and harmony to the world. I think it is very important because His Holiness teaches the best way for harmonious development, individually and universally.