Thank you for reading our monthly e-letters and for your kind support of the Lama Yeshe Wisdom Archive.

First, a confession! There are four lines missing from the Tibetan phonetics in Direct and Unmistaken Method. The space at the top of page 20 should contain:

There’s no great fault if you’ve been doing the practice without reciting those four lines (they’re not missing from the English), but in future it would be better if you recited them. Sorry about that.

We are delighted to announce that, at last, Teachings from Tibet, which contains teachings from thirteen great lamas, has been printed and will be sent to all LYWA members and benefactors in mid-September. If you are neither member nor benefactor but would still like a copy, please visit our online store to place an order. Please note that we won't be able to start shipping the book until mid-September, but you can place your order now.

We have added many more teachings to our Web site: two teachings by His Holiness the Dalai Lama — A Survey of the Paths of Tibetan Buddhism and a commentary on Gyalwa Gyatso; a teaching by Lati Rinpoche titled Bliss and Emptiness in the Gelug Tradition (which is now posted on our companion website Teachings From Tibet); Denma Lochö Rinpoche's commentary on Lama Tsongkhapa's Three Principal Aspects of the Path (also now posted on Teachings From Tibet;) a series of teachings by Lama Zopa Rinpoche titled Practicing the Good Heart and another talk by Rinpoche titled Great Compassion and His Holiness the Dalai Lama.

In the meantime, here, we’ve got a great September coming up. Your devoted and intrepid LYWA team—Wendy, Jen, Sonal and me—is driving down to Virginia for Lama Zopa Rinpoche’s visit to Guhyasamaja Center. Then Wendy and I are going to His Holiness the Dalai Lama’s teachings in Tucson and New York. It is only through the kindness of our gurus and all sentient beings that we have these opportunities and we do our best to repay it all. I hope to be able to offer you news of these events in our next e-letter.

However, before leaving the subject of His Holiness the Dalai Lama in America, the Mind & Life Institute is presenting “Investigating the Mind 2005: The Science and Clinical Applications of Meditation” in Washington DC November 8–10, 2005, and there are still plenty of places available, as it’s one of the few (and might be one of the last) Mind & Life conferences with His Holiness that has been open to the public. These are wonderful conferences and I strongly recommend that you try to get there if you can. I hope to be there, too!

This month’s teaching from Lama Zopa Rinpoche continues from where we left off in the June e-letter. Here, Rinpoche begins a teaching on emptiness. Of great interest and related to this is our most recently posted teaching on the website—Ven. Thubten Chödron’s interview with Rinpoche about emptiness.

Thank you so much for your kind interest in the Lama Yeshe Wisdom Archive and the enlightenment of all sentient beings.

In Lama Tsongkhapa’s Three Principal Aspects of the Path, there’s a verse that goes

Even though you familiarize yourself with renunciation
And the mind of enlightenment,
Without the wisdom realizing emptiness,
You cannot cut the root of existence.
Therefore, strive to realize dependent arising.

Here, Lama Tsongkhapa is saying that it’s not enough to have realized bodhicitta; you have to realize emptiness. However, instead of saying straight out “therefore, meditate on emptiness,” he says “strive to realize dependent arising.”

He then goes on to say

Whosoever sees the infallibility of cause and result
Of all phenomena in samsara and nirvana
And destroys all modes of apprehension
Enters the path that pleases the buddhas. 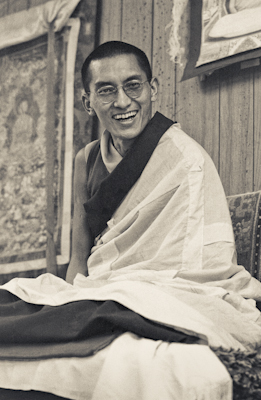 This means that when you realize that the object of ignorance—the I held to be truly existent by the concept of true existence, the I that is apprehended or believed one hundred percent to be real, in the sense of independent and existing from its own side—is totally empty, does not exist at all, it completely disappears. It doesn’t go anywhere; right there where it appears, it’s totally empty, does not exist at all.

It’s like when you see a scarecrow in a field at night and think that it’s a person but then shine a light on it and see there’s nobody there at all. The hallucination of a real person standing there stops immediately; there’s not an atom of person there. You saw the scarecrow as a person because your mind labeled the appearance “person”; you believed there was a real person there and thought, “I really see a person.” Even though it was a hallucination, you thought a person really existed there, just like when you’re dreaming you think that things you’re seeing really exist—even though not only do they not exist from their own side; they do not exist at all.

This proves that things don’t necessarily exist as they appear.

Similarly, when you realize the nature of the object of ignorance, which you previously believed one hundred percent to exist from its own side, the way it appears, it’s suddenly not there. It’s totally empty, right there; not an atom of it exists from its own side. When you realize the emptiness of the previous hallucination—the object of ignorance, the real I in the sense of what appears from there, is totally existent—that not an atom of that independent I existing from its own side actually exists, it completely disappears; it becomes completely non-existent.

Realizing the emptiness of the truly existent I, the object to be refuted, and training your mind in that realization, going back to it again and again, does not lead to nihilism, the idea that the I does not exist at all. By training your mind in emptiness in this way, repeatedly coming back to this point, seeing and meditating on emptiness, you discover that there definitely is an I, but it exists in mere name, merely imputed by the mind.

However, the borderline between any phenomenon’s existing and not existing is extremely subtle. Take the I, for example. It’s unbelievably subtle. It exists in mere name; merely imputed by the mind. The valid base of the aggregates is there and for that reason the mind simply makes up the label I and that’s it. There’s nothing additional to that, nothing more. There’s not the slightest thing more than that. The I exists and that’s it, finished: because the aggregates are there, your mind just comes up with the label I—and then believes in it. Why does the I exist? There’s no reason other than the fact that a valid base for it, the aggregates, exists. The I exists because the base exists. That’s all there is to it; just that.

When you realize that the object of ignorance—the truly existent I that is one hundred percent grasped, apprehended, or held by ignorance—is totally empty, not an atom of it exists, you don’t come to the conclusion that the I doesn’t exist. You discover, instead, that it exists in mere name, merely imputed by the mind. You discover the conventional truth—the I exists in mere name. You see the I according to its reality. It’s merely imputed by the mind.

So, as Lama Tsongkhapa says, if you realize that the object of ignorance—the real I that ordinary people talk about, or, in Buddhist philosophical terms, the independent I, the I that exists from its own side or by nature—is totally non-existent, you have entered the Middle Way devoid of extremes of eternalism and nihilism. You have entered the path that pleases the buddhas.

To be continued next month.

Lama Zopa Rinpoche gave this teaching at the mahamudra retreat, Adelaide, Australia, April 2004. It was excerpted and edited from the Lama Yeshe Wisdom Archive by Nicholas Ribush. Excerpts of the teachings from this retreat can be listened to on the audio section of our website—see Day 23 for this teaching.