Great Compassion Buddha and His Holiness the Dalai Lama

This teaching was given at Aryatara Institute, Munich, Germany, April 2001. Edited from the Lama Yeshe Wisdom Archive by Nicholas Ribush. First published in the IMI's print publication Sangha Magazine in October 2001. 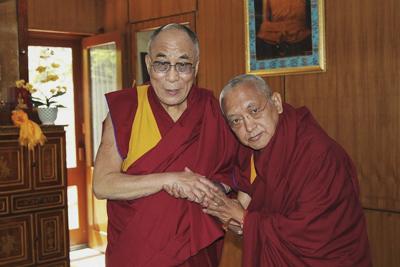 The Buddha is here among us

Why do I often say that His Holiness the Dalai Lama is Chenrezig, the Buddha of Compassion?

What is the definition of the realization of great compassion? Consider how a mother would feel if her beloved only child fell into a fire. How would she feel? She wouldn’t be able to stand it. Twenty-four hours a day, no matter what she was doing—eating, walking, talking—she’d constantly feel unbearable that her beloved child was suffering. Not only that; she would also take upon herself the responsibility of freeing her child from that suffering. Even though there might be many other people around, she would want to save the child herself. That’s how it feels to have great compassion.

The way that a mother feels when her beloved child fall into a fire is that she immediately wants to go into that fire and save the child herself. Similarly, when you have realized great compassion, you feel sentient beings’ suffering unbearable and you upon yourself the responsibility of liberating them from suffering and its cause.

If this, then, is your attitude when you have realized great compassion, is it possible that after you have attained enlightenment you wouldn’t work for the welfare of all sentient beings?

It’s theoretically possible to have attained the omniscient mind by completing all knowledge as well as the perfect power to reveal all the methods and not act for the benefit of sentient through not having compassion. That’s theoretically possible. But if you’ve completed the mind training in compassion by training in it for inconceivable lifetimes, how could you possibly not act to help sentient beings?

There’s also one extra thing to add with respect to His Holiness the Dalai Lama, which is that Guru Shakyamuni Buddha himself predicted that His Holiness would be the incarnation of the Buddha of Compassion, the Dharma king working for sentient beings in the Land of Snows, Tibet. When Lord Buddha was in India, he told the bodhisattva who always accompanied him that when the teaching declined in India, “At that time, you will be Chenrezig, the Buddha of Compassion, and the sentient beings in Land of Snows, Tibet, will be the object to be subdued by you.”

Recently, when His Holiness was teaching at Geshe Sopa’s center, Deer Park, in Madison, Wisconsin, he said, “I have no realization of bodhicitta or emptiness.” His Holiness often says things like that, but then might add something like, “But I have strong faith.” Later on, when Geshe Sopa Rinpoche’s students, the organizers of the center, had an interview with His Holiness, one of them said very emotionally, “You say that you don’t have realizations, so what hope is there for us? There must be none.”

Then it kind of slipped out of His Holiness’s holy mouth—he had to respond to that person with something, so His Holiness said sort of as a private talk—“Actually, I remember when I was with Shakyamuni Buddha in India.” His Holiness didn’t tell the whole story, but he did say that he remembered being with the Buddha in India…but he didn’t give any details.

His Holiness Dalai Lama is also the incarnation of Dromtönpa, the great translator of Lama Atisha in Tibet. Dromtönpa is the embodiment of the Buddha of Compassion. That is well known.

So, in terms of bringing peace into this world or into the minds of sentient beings, who has the greatest impact? Who has the greatest effect in changing their minds and thoughts from negative to positive? Actually, His Holiness takes full responsibility for all sentient beings throughout all of space, which is beyond our perception, but at least we can see the peace and happiness that he brings into this world in which we live.

Not only that, but His Holiness also bears full responsibility for the welfare of the Tibetan people in particular, who have a karmic connection with Chenrezig.

Our enlightenment depends on us

Sick people’s recovering from their illness does not depend only on their doctor making the correct diagnosis and giving them the right prescription. It is not sufficient simply to have a doctor who possesses complete medical knowledge. The patient also has to take the medicine, follow the guide. Only then can the patient recover. It’s the same thing when it comes to reaching enlightenment.

If we want to achieve enlightenment, it’s not only up to Buddha. Buddha has already fulfilled his responsibility by revealing the path. He’s done his bit. Now it’s up to us. From our side, we have to practice. Only then can we get enlightened. We have to correctly practice the teachings.

People say that if you don’t believe in God, you’ll go to hell. By saying that, they show that in fact everything is not totally up to God; not going to hell depends your making an effort from your own side; you have to generate faith in God. Therefore, it’s not completely up to God. You also have to observe the Ten Commandments. People say that everything is in God’s hands but you can see that God is not the creator. People themselves have to make the effort to observe the Ten Commandments; they have to practice morality.

Basically, it comes to the same point in Buddhism—from their side, sentient beings also have to make an effort.

What I’m saying, therefore, is that because His Holiness has these unbelievable qualities—offering sentient beings and the teachings of the Buddha benefit as limitless as the sky; taking responsibility for the peace and happiness not only of beings in this world but also for all sentient beings everywhere; preserving and spreading the complete teaching of the Buddha; and taking responsibility for the freedom or independence of Tibet—it is very important that we follow his advice. From our side, we must follow His Holiness’s words and support his holy wishes in order that they succeed.

The more we support His Holiness and the fewer obstacles we create, the more he can benefit sentient beings with his limitless skies of qualities. We ourselves don’t have those qualities; even though we have the potential, we haven’t yet attained all those realizations, so we cannot benefit others like His Holiness the Dalai Lama can. But if we support him and don’t create obstacles, he can benefit sentient beings in the most extensive way.

In a way, this is similar to the situation in a Dharma center, where there is a geshe who has studied Buddhadharma extensively for many years in a community of thousands of monks, lived a life of content, which is the real meaning of being a monk—leading a simple, content life in the monastery and not changing, even upon coming to the West—and lives in the practice of compassion and morality.

Even though in a center it is the geshe who teaches and educates to the students, leads those sentient beings to enlightenment, his ability to do so depends on the director, the secretary, the translator and all the other people who work together to make the center function properly. Even though the actual teaching is given by the geshe, by working together, the other people also help to spread the Dharma. Even though those people are not verbally teaching the Dharma, by taking responsibility for a certain area and working together with others, each one is also helping spread the unmistaken teachings of our kind, compassionate Buddha and, in particular, the teachings of Lama Tsongkhapa, to sentient beings.

In life, it’s a question of doing what’s most profitable, thinking not only of yourself but also of other sentient beings and the world in general, and making the wisest and most skilful decision to benefit both yourself and others. Use your wisdom to analyze what is most beneficial for yourself, the world and all other sentient beings—not just for now but also for the long-distant future—and on the basis of that, decide how best to lead your life.