Welcome to our latest e-letter and, as ever, thank you for reading it.

Thank you so much for your extremely positive feedback on our latest free book, Teachings from Tibet. We’re in the process of sending copies out to our members and benefactors and to FPMT centers around the world. If you are not in one of these groups and would like a copy, please visit our website or email us at info@LamaYeshe.com.

We have added some more teachings to our website, such as the Diamond Cutter Sutra and Lama Zopa Rinpoche's special dedication to it. We have also added advices to existing sections of Rinpoche's online Advice Book and added a new section titled "Non-harming", where Rinpoche gives advice about benefiting and protecting life in all its forms.

Speaking of which, I’d also like to draw your attention to Tibetan Volunteers for Animals, whose tag lines include “Stop Eating Animals,” “Animals Need Your Love,” “Animals Are Not Our Food” and—especially—“Don’t Kill Animals: Kill the Animal inside YOU.” Many of us who have been studying with lamas for years have long been puzzled by the dissonance between Tibetans’ espousal of universal compassion and their love of meat (eating it). So, here are some Tibetans, mainly young, trying to put their hearts where their mouths are. Check out some of their heart-breaking links. Thank you so much.

We’ve had three excellent Dharma weekends, as mentioned in our previous e-letter. Our LYWA in-house staff went to Lama Zopa Rinpoche’s Guhyasamaja Center teachings in Virginia, Wendy Cook and I went to His Holiness the Dalai Lama’s Bodhicaryavatara teachings in Arizona, and a big group of us from Kurukulla Center just attended His Holiness’s Avalokiteshvara teachings and initiation in New York this past weekend. 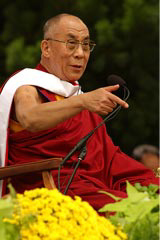 His Holiness spoke to around 40,000 people at Rutgers University last Sunday.

If you would like to listen to His Holiness the Dalai Lama’s Arizona teachings, go to Lam-rim Radio where, of course, you will also find many other audio teachings.

If you would like to see His Holiness in America later this year, please try to get to the Mind and Life Institute’s “Investigating the Mind 2005: The Science and Clinical Applications of Meditation” in Washington DC November 8–10. His Holiness will attend all sessions and it’s going to be a wonderful event.

And below, we offer you a continuation of Lama Zopa Rinpoche’s teaching from Australia last year that we’ve been serializing these past few e-letters.

Thank you for your kind interest in and support of the Lama Yeshe Wisdom Archive. We couldn’t do it without you!

The Root of Samsara, the Actual Cause of Suffering 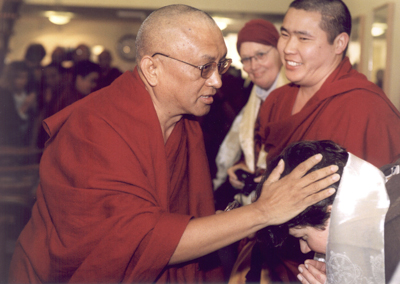 The Heart Sutra says, “No eye, no ear, no nose, no tongue, no body, no mind.” If fear arises when you recite these words, that’s positive; a good sign. It’s good because it shows that your “no” is hitting its intended target—the object of ignorance, the object of refutation, the real I in the sense of its being independent, existing from its own side, as ignorance believes. So when you strike that you feel afraid—I don’t know how other teachers might say this, but that’s what I think. You focus on the object of ignorance, it’s not there, and fear arises.

If you miss the point of the “no” when you meditate or think about emptiness, if you don’t hit the object of ignorance, the false I, the I existing from its own side, if instead you negate the I that exists, that which is merely labeled by the mind, fear won’t arise.

Why do you not feel fear when you miss the target and fall into nihilism? What I think is that, even though you can’t find the general I, the merely labeled I, at the same time your ignorance is continuously holding on to the real I—the independent I, the I that exists from its own side. The real I that’s meditating is still there; there’s still a real I doing the meditation—that target hasn’t been hit. So as long as there’s still a real I meditating on emptiness, if you fall into nihilism, I don’t see how fear can arise.

Now, if you’re a person for whom all the causes and conditions have some together—there are strong imprints from past lives, you’ve heard and studied teachings on emptiness and meditated on them, you have received many blessings in your heart and accumulated much merit through strong guru devotion and have done extensive purification through practices such as prostrations to the Thirty-five Buddhas and Vajrasattva meditation recitation—you don’t need to hear many words. Because you have pacified the obstacles to realization and gathered the necessary conditions, great merit, your mind is ready, and just by hearing one or two words you instantaneously recognize the gag-cha, the object of refutation, the false view.

The false view has always been there. We were born with it; we got up with it this morning. It’s been there throughout our beginningless rebirths but we’ve never recognized it and have always believed it to be true, and that has prevented us from seeing the truth.

What I’m saying is that there’s a merely labeled I—the I that actually exists—and a false I projected onto that by the negative imprints left on our consciousness by past ignorance. In other words, the merely labeled I is decorated by the appearance of true existence projected onto it by the imprints of past ignorance left in our mental continuum.

Ignorance leaves negative imprints on our mental consciousness. When our mind focuses on our aggregates, just by virtue of their being there, in the first second it merely imputes an I upon them. For example, if your body is engaged in the action of sitting, if somebody asks you what you are doing, your mind looks to see what your aggregates are doing, sees that your body is seated and imputes “I’m sitting” or whatever it is that you’re doing. It could also be something you’re doing verbally or mentally—speaking, listening, thinking and so forth—but whatever it is, it’s a merely imputed action…that function also exists in mere name. So, the first second, by thinking of the aggregates, the mind merely imputes the I, and the next second, this merely imputed I appears back to the mind as not merely labeled by the mind.

Then, the same continuity of that thought—the first moment of thought imputes, the second moment, which is the continuity of the first thought that merely imputed the I—believes, holds onto, apprehends this inherently existent, truly existent I, this I that appears not merely labeled by the mind, to be true. It does so because we’re not aware or have forgotten that our own mind, our own thought, has just merely imputed the I on the aggregates.

So, we allow our mind to hang onto this projection—the way the I appears, not merely labeled by the mind, truly existent, real—thinking, apprehending, it to be true. At this time, then, this thought becomes ignorance. The second moment of thought, that which we allow to hang onto the I that appears as not merely labeled by the mind as true, is what receives the label “ignorance” [finger snap]. At this very moment we create ignorance [finger snap], that very specific ignorance that becomes the root of samsara.

To be continued next month.

Lama Zopa Rinpoche gave this teaching at the mahamudra retreat, Adelaide, Australia, April 2004. It was excerpted and edited from the Lama Yeshe Wisdom Archive by Nicholas Ribush. Excerpts of the teachings from this retreat can be listened to on the audio section of our website—see Day 23 for this teaching.