Listen to the free audiobook narration of the Maitreya Buddha sadhana, found in Appendix 2 of Universal Love. 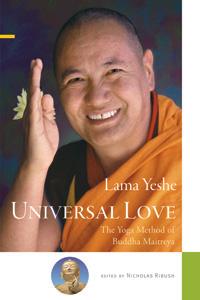 We are delighted to add to our collection of Lama Yeshe books and Wisdom Publications’ series of Lama Yeshe’s tantric commentaries by publishing Lama Yeshe’s teachings on the yoga method of Maitreya, which he taught at Maitreya Institute, Holland, in 1981.

Buddha Maitreya was very dear to Lama Yeshe’s heart. As well as giving this commentary on the yoga method Lama also taught two of Maitreya’s five famous texts: Dharmadharmatavibhanga (Discrimination of Phenomena and the Nature of Phenomena) and Madhyantavibhanga (Discrimination of the Middle Way and the Extremes). And of course, Lama initiated the Maitreya Project, the building in India of a five-hundred foot statue of Maitreya, more information about which can be found here.

Thus we were delighted when the Maitreya Project commissioned us to publish this book. When we had finished the first draft we realized that publishing Lama’s commentary alone would make the book relatively inaccessible to people unfamiliar with tantra, so we decided to add some introductory lectures from Lama’s 1975 teachings in the USA. Now the book has something for everybody and better introduces the general reader to Lama’s unique teachings on tantra.

However, as Lama has taken pains to point out before: “…a word of caution to the intellectual. Reading tantric teachings on your own, without the power of the appropriate initiation, is just an intellectual pastime—only by practicing correctly, under the guidance of a fully qualified and experienced teacher, can you evolve beyond the intellect, beyond conceptual thought into the true wisdom of a pure, spontaneous being. I am not trying to be mysterious or exclusive here but simply saying that if you think that you can understand, let alone experience, the methods of tantric yoga merely by reading books, you are deceiving yourself—like a terminally ill person doctoring himself with the same methods that made him ill in the first place.”

In other words, simply reading books about tantra does not qualify us to practice it. For that, we need initiation and qualified guidance. So the question then arises, why publish books on tantra? It’s true that in times past such teachings were secret and not made available to non-initiates. Things today are different. So many books on tantra are being published by so many unqualified authors that no less an authority than His Holiness the Dalai Lama has said that teachings that once would have been kept secret should now be published in order to correct mistakes made by inauthentic writers.

That said, Lama does tell the Maitreya students, “In the future, in my absence or that of another teacher, I think it would be good for Maitreya Institute to organize retreats on this yoga method. Personally, I also think it would be all right for people who have not had the initiation to join such retreats. Because this is Maitreya Institute we can make the exception that people can practice Maitreya without initiation. There would be many benefits from that. In Tibet we also had a system where people without initiation could join a group deity yoga retreat but could not do the practice individually.”

So, thanking Wendy Cook and Jennifer Barlow for their kind and helpful editorial suggestions, I hope you enjoy Lama’s teachings in this book and are inspired to go deeply into the practice, find a fully qualified teacher like Lama himself, and quickly reach your ultimate mental and spiritual potential, enlightenment, for the benefit of all beings.

Chapter 1: What is Buddhism? »