A short Vajrasattva practice composed by Lama Zopa Rinpoche and and published in a pocket-sized format. Thus, whenever we have broken a vow or created any other kind of negative karma, we can purify that negativity with the four opponent powers without a second’s delay. 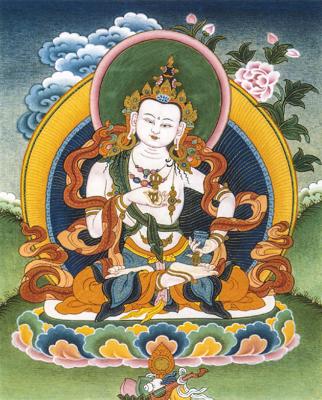 The Power of Dependence (A): Taking Refuge

"I forever take refuge in Buddha, Dharma and Sangha,
I take refuge in all the three vehicles,
In the dakas and dakinis of secret mantra yoga,
In the heroes and heroines, the gods and goddesses
And in the bodhisattvas of the ten bhumis.
But most of all, I take refuge in my holy guru forever." (3x)

The Power of Regret

First recall the definition of negative karma-any action that results in suffering, usually an action motivated by ignorance, attachment or aversion.

"Almost every action I do, twenty-four hours a day, is motivated by worldly concern, attachment to the comfort of this life. It is like this from birth to death in this life and has been like that from beginningless rebirths. Nearly every action I have ever created has been non-virtuous, the cause of suffering. Not only that, but continuously I have also been breaking my pratimoksha, bodhisattva and tantric vows. Worst of all, I have created the heaviest of negative karmas in relation to my virtuous friends—getting angry at them, generating wrong views, having non-devotional thoughts towards them, harming their holy body and disobeying their advice. Having these negative imprints on my mental continuum is unbearable. It's as if I've swallowed a lethal poison. I must practice the antidote right away and purify all this negative karma immediately, without a second's delay."

In this way, generate strong feelings of urgency and regret.

"Many people my age or younger have died. It's a miracle that I'm still alive and have this incredible opportunity to purify my negative karma. Death is certain but its time is most uncertain. If I were to die right now, I would definitely be born in the lower realms. Because I could not practice Dharma there I would remain in the lower realms for countless eons. Therefore, how unbelievably fortunate I am to be able to purify my negative karma right now, without even a second's delay, by practicing the Vajrasattva meditation-recitation."

The Power of Dependence (B): Generating Bodhicitta

"But I am not practicing this Vajrasattva purification for myself alone—the purpose of my life is to release all hell beings, pretas, animals, humans, asuras, suras and intermediate state beings from all their suffering and its causes and lead them to unsurpassed enlightenment. In order to do this I must first reach enlightenment myself. Therefore, I must purify all my negative karma immediately by practicing the Vajrasattva meditation-recitation."

"Above the crown of my head, seated upon a lotus and moon seat, are Vajrasattva father and mother. Their bodies are white; each has one face and two arms. He holds a dorje and bell, she a curved knife and skull cup. They are embracing each other. The father is adorned with six mudras, the mother with five. He sits in the vajra posture, she in the lotus.

"Vajrasattva is my root guru, the holy mind of all the buddhas, the dharmakaya, who out of his unbearable compassion, which embraces me and all other sentient beings, appears in this form to purify me and all others."

In this way, your mind is transformed into guru devotion—the root of all blessings and realizations of the path to enlightenment.

"On a moon disc at Vajrasattva's heart stands a HUM encircled by a garland of the hundred syllable mantra. A powerful stream of white nectar flows from the HUM and mantra garland and I am cleansed of all sickness, spirit harm, negative karma and obscurations."

The Power of the Remedy: Mantra Recitation

The meaning of the mantra: You, Vajrasattva, have generated the holy mind (bodhicitta) according to your pledge (samaya). Your holy mind is enriched with the simultaneous holy actions of releasing transmigratory beings from samsara (the circling, suffering aggregates). Whatever happens in my life-happiness or suffering, good or bad-with a pleased, holy mind, never give up but please guide me. Please stabilize all happiness, including the happiness of the upper realms, actualize all actions and sublime and common realizations, and please make the glory of the five wisdoms abide in my heart.

Recite the mantra seven or twenty-one times or as many times as possible, practicing the three techniques of downward cleansing, upward cleansing and instantaneous cleansing.1

Generating Faith in Having Been Purified

"From the crown of my head, Guru Vajrasattva says, 'Son of the race2, your negativities, obscurations and broken and damaged pledges have been completely purified.'"

Generate strong faith that they have been completely purified just as Guru Vajrasattva has said.

The power of Refraining from Creating Negativities Again

Place your mind in that emptiness for a little while. In this way, look at all phenomena as empty—they do not exist from their own side. With this awareness of emptiness, dedicate the merits.

"May the precious bodhicitta, the source of all happiness and success for myself and all other sentient beings, be generated within my own mind and in the minds of all sentient beings without even a second's delay; and may that which has been generated be increased.

"May I and all other sentient beings have Lama Tsongkhapa as our direct guru in all our lifetimes, never be separated for even a second from the pure path that is greatly praised by the conqueror buddhas, and actualize the complete path-the three principal paths and the two stages of Highest Yoga Tantra—the root of which is guru devotion, within our minds as quickly as possible.

"Just as the brave Manjushri and Samantabhadra realized things as they are, I dedicate all these virtues in the best way, that I may follow after them.

"Whatever dedication the three time victorious ones gone to bliss have admired as best, in the same way, I also perfectly dedicate all these roots of virtue so that I may perform good works."

1 See Becoming Vajrasattva, The Tantric Path of Purification, pp. 58-60, for details of these three methods of purification. [Return to text]

2 This "son of the race" has nothing to do with gender but refers to a sentient being of a certain mental type, which in turn relates to the buddha family into which one has been initiated. [Return to text]

This teaching was given by Lama Zopa Rinpoche during the Vajrasattva retreat, Land of Medicine Buddha, Soquel, California, USA, 1999, and revised in New York, November 1999.