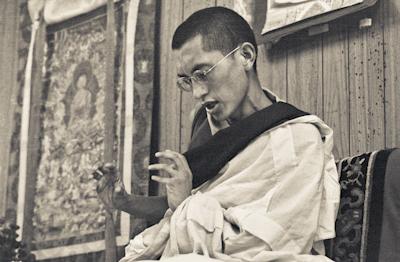 The Buddha explained in a sutra that we can never achieve satisfaction as long as we follow desire. Furthermore, Lama Tsongkhapa said in the Lam-rim Chen-mo that following desire opens the door to many problems. Just as many branches grow from the root of a plant, most of the disturbing emotions and problems we face in life grow out of desire.

The great yogi Sharawa said that with clinging comes dissatisfaction. Even though we might have more than enough material possessions, clothes, money and so forth to last our whole life, we still feel we don’t have enough, we still crave more. Following desire doesn’t fill the empty heart. No matter how many objects of desire we manage to obtain, we still don’t experience satisfaction and that is our major suffering. There’s never an end. Whether we experience a little pleasure or a lot, we never find real satisfaction so we just want it again and again and again and again and again. We’re always craving for better and more but it just doesn’t happen. Desire is by nature hungry; it can never be satiated.

And talking of business, even if it works and we make a thousand dollars, we want one hundred thousand; after one hundred thousand, we want a million; then a million’s not enough, we want a billion. After we make a billion, we want a trillion, then a zillion. It never ends. Satisfaction always eludes us. It’s always just around the corner; it tells us it’s in the next purchase or the next salary increase. Life continues with the same worry, the same fear of losing our wealth, the same fear of being unable to do better than others.

We can travel around the world for months or even years trying to find a desirable object, trying to find a friend. Our mind is so upset, so lonely, so worried we won’t get what we want. One country doesn’t give us what we need and so we go to another. Maybe we spend some time hanging around in Greece, but not finding the object to satisfy our desires there, we go to California.

We spend all our money like this. We cling to the dream of finding the perfect partner but, unable to meet him or her in one place, our attachment takes us to another part of the world. We experience a difficult life, full of problems, all caused by the evil thought of eight worldly dharmas.

There are many people like this, totally out of control, blindly following attachment. Some end up going crazy or killing themselves because they can’t control their lives. They’re always searching for happiness but finding only suffering.

There’s no end to the wanting; there’s no end to the work. Like hundreds of branches spreading from one single trunk, countless problems start from the fundamental dissatisfaction that the thought of the eight worldly dharmas brings us. Problems come like ripples on a lake; they never finish—one comes, then another, then another, without end. Forever. From beginningless rebirths we’ve been following desire and still it hasn’t ended.

Life becomes so heavy and difficult, bringing depression, worry, fear. Chasing satisfaction in things, we have no chance to enjoy what life can offer. Even if we’re living in a jeweled palace full of luxuries, even if we have billions of cars—Bentleys, Lamborghinis, Ferraris, Rolls—even if we have billions of swimming pools, we still can’t really enjoy life. We might have an army of servants working for us but we’re still completely miserable. Look at the very rich beyond their glossy exteriors and ask yourself whether they’re truly happy. Many of them look thoroughly worn down and miserable.

When we don’t get what our attachment wants, we feel hopeless. This is one of the fundamental sufferings in our life. This is what makes people crazy. Whatever we’re attached to that we lose—our business, our friend, whatever—makes us think that our life has no meaning. Then, due to anger, jealousy and so forth, we create negative actions such as killing or stealing. We cause so much harm to ourselves and others. It brings much unhappiness not only to ourselves but also to many others and is the cause of rebirth in the lower realms.

We need to let go by practicing mindfulness, by watching the mind. Then, when attachment to the eight worldly dharmas arises, like the missiles that America used on Iraq that pinpointed their target even after traveling hundreds of miles, we need to see attachment for what it is and launch our nuclear missile of mindfulness right at it to destroy it.

“Door,” of course, refers to the mind. This is where we can find real peace and happiness but the person who still clings to external sense pleasures can never know this. If we still crave delicious food, beautiful clothes and comfortable places, we can never know the peace and happiness that a renounced person does. Drogön Tsangpa Gyare says that only by subduing the thought of the eight worldly dharmas can there be peace. Those who follow this evil thought will never know it.

He goes on to say that if a practitioner completely cuts off the root of delusion, the evil thought of the eight worldly dharmas and the ignorance that grasps a truly-existent I, real happiness can be found. Finally, he says that whether a person has possessions or not—he might be materially poor without enough food for even one meal—if that person is satisfied, he has great wealth, whereas somebody who is full of desire and feels he never has enough is poorer than the poorest beggar, even though he might have untold riches.

As we have seen, satisfaction is not the product of material objects but is a state of mind, an experience of the mind. Not understanding where real satisfaction comes from, people trapped by desire are frightened by the thought of giving up the external things that they wrongly see as the source of their happiness. They can’t see that there can be satisfaction without material possessions. They can’t see that the greatest wealth, the real gift that brings happiness and freedom from an uptight mind, is freedom from desire.

Living in the confusion of desire, no amount of possessions can cure the problem. But the simplest person, without material possessions but also without the thought of the eight worldly dharmas, has the most valuable possession, the most valuable method of making life happy. Even trillions of dollars cannot bring this gift.

I remember when I first went to the West I found it a bit strange how people always asked dinner guests what they wanted to eat. In the East the food is just served and everybody accepts what is there, but it seems that Westerners have to have a choice. Lama Tsongkhapa advises us to train by not letting attraction to samsaric perfections—samsaric happiness, reputation, power, wealth, all these things—arise for even one second, so accepting what is given is part of our practice. If we can hold this thought in our mental continuum continuously, then we have generated the realization of renunciation, the determination to be free from samsara.

Happiness Starts When We Renounce This Life »