The Essence of Tibetan Buddhism

This book consists of two teachings. The first, The Three Principal Aspects of the Path, was given in France in 1982, during an FPMT-sponsored tour of Europe by His Holiness the Dalai Lama. The second teaching, Introduction to Tantra, was given at Grizzly Lodge, California, in 1980. You can view both of these talks on our YouTube channel.

See also the Related Links to access the audio recordings and videos, and read along with the edited transcripts, or listen to a free audiobook on Google Play. 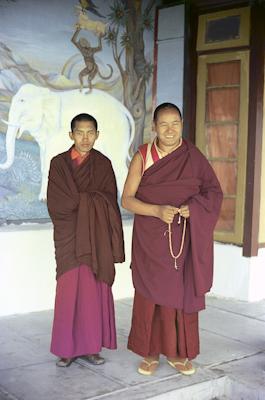 This publication is the third in our series of free books by Lama Yeshe, following the extremely popular and well received Becoming Your Own Therapist and Make Your Mind an Ocean.

It differs, however, in that the material contained herein is also on video, which we have put onto DVD, so that you can now see and hear Lama Yeshe giving these teachings. We have edited this book less intensively than normal so that the text quite closely adheres to Lama’s original words and phraseology, making it easier to follow when watching the DVDs. For the same reason, we have also left intact Lama’s references to world events of the time, such as the various Middle East dramas of 1979–80.

Lama’s teachings were dynamic events full of energy and laughter. He taught not only verbally but physically and facially as well. Thus, we encourage you to get the DVDs of these teachings in order to get as total an experience of the incomparable Lama Yeshe as possible.

The first teaching, The Three Principal Aspects of the Path, was given in France in 1982, during an FPMT-sponsored tour of Europe by His Holiness the Dalai Lama. Just before His Holiness’s scheduled teachings at Institut Vajra Yogini, His Holiness manifested illness and asked Lama Yeshe to fill in for a couple of days—to “baby-sit” the audience, as Lama put it. This wonderful two-part teaching on the three principal aspects of the path is the result.

The second teaching, Introduction to Tantra, also in two parts, was given at Grizzly Lodge, California, in 1980. It comprises the first two lectures of a commentary on the Chenrezig yoga method taught by Lama at the request of Vajrapani Institute, Boulder Creek. The entire course was videotaped and we plan to make available the remaining six tapes as soon as we can enhance their sound and picture quality. [They are now available.]

I am most grateful to Linda Gatter and Wendy Cook for their editorial input, which greatly enhanced the text of this book, Greg Sneddon and his team in Melbourne, Australia, who digitized the videos of these teachings, and Ven. Bob Alcorn, who put these teachings onto DVD. Thank you all so much for your help.