A student was taking the Namgyälma mantra to the top of a mountain to bless the area. Rinpoche offered this advice about the benefits of the mantra. 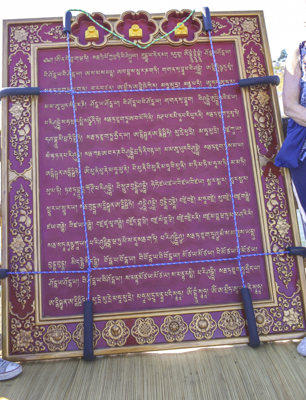 My most dear, most precious, most kind, wish-fulfilling one,

If you can, also print Namgyälma mantras and laminate them and put them on the mountain, then the whole mountain becomes holy. Place them well, so they will not be taken by the wind. Then any insects that come on the mountain will be purified. It causes them to never be reborn in the lower realms and they will get a higher rebirth when they die. This is such a good thing to do, to help not only other people but also all the insects.

I think you have the Namgyälma protection (the folded one) that you keep on your body—not in your trouser pocket, but with a blessed string around your neck. Wearing that purifies the mind all the time and when you die, you will never be reborn in the lower realms.

If it’s kept in the house then any insects that come in the house, all their negative karma is purified, and when they die they won’t be reborn in the lower realms, but in the higher realms.

When someone dies, you can put the Namgyälma mantra on their body for some time. It’s very good, then their consciousness doesn’t go to the lower realm, they are purified. If you have some of the mantras you can use them for that, even for animals, dogs.

Rinpoche gave this advice about the benefits of the Amoghapasha mantra to a new student whose husband had recently passed away.

My most dear, most kind, most precious, wish-fulfilling one,
I am very sorry for the long delay in replying to your email. I am sending you two photos of Amoghapasha. Until the sadhana is translated, please do three malas a day of the mantra of this deity.

Think that from the deity, [who is one with] His Holiness the Dalai Lama, the guru, beams of light are sent to you and to the six-realm sentient beings with much compassion, purifying all the negative karma and obscurations collected from beginningless rebirths. At the end the deity melts in light and absorbs into you. Then you become the deity, having received all the qualities.

It’s the same when you use this mantra to bless a conch. Then when you blow the conch, it purifies the mind of anyone who hears the sound. It’s the same when you recite the mantra to bless drums. You recite the mantra seven times, then whoever hears that sound—people or animals—it purifies the very heavy negative karmas without break, the five uninterrupted negative karmas.

You can even recite it for people who have died. If they are born in the lower realms, for example, a bhikshu who has received the four defeats [has broken the four root vows] and is born in hell, by thinking of that monk, if you recite this mantra it transforms from the lower realm and they get a higher rebirth.

So please try to do this. Please make your life most meaningful with the thought of bodhicitta day and night, and in every action you do.

Rinpoche offered this advice about the benefits of the Stainless Pinnacle mantra to a Dharma center.

This mantra taught by Buddha, the Stainless Pinnacle Lotus mantra, if it goes on the body, purifies 10,000 eons of negative karma. So this is very good to put on the head; this is how it is used.

It has many other benefits, such as bringing success and healing.

If a fully ordained monk has broken all four root vows and has been born in hell, thinking of that person and reciting this mantra has the power to liberate that person from hell and bring them a higher rebirth.

Homage to all buddhas and bodhisattvas! Thus have I heard at one time. The Lord Buddha was staying at Sravasti and at that time the Destroyer Qualified Gone Beyond One1 said to the Venerable Ananda:

“Ananda! The wisdom mantra of six syllables is set forth by the six fully, perfectly enlightened buddhas, the four world protectors, and the twenty-eight great yaksha leaders. Ananda! Hold this queen wisdom mantra2 of six syllables. Keep it!3 Understand the meaning completely!

“This, Ananda, is the six syllable wisdom mantra.

“This six syllable wisdom mantra protects, completely saves, completely protects, completely guards, fully nurtures, pacifies, and makes one happy and good. It frees from punishment and frees from weapons, neutralizes poison, and if anyone transgresses this, by sprinkling the water6 or binding with thread,7 Ananda, in this world with its devas, maras, Brahma, virtue training,8 brahmins, gods, suras, asuras, and human beings I did not see, their heads will get cracked into seven pieces like the petals of the flower niga.9

2 Memorize it  [Return to text]

4 Fingers and toes  [Return to text]

6  Blessed with these six syllables  [Return to text]

7  Thread that is blessed by this mantra, mantra is blown on the thread  [Return to text]

Rinpche offered the following zung and mantra of Norbu Sangpo.

The Exalted Zung of Norbu Sangpo

I prostrate to the Three Rare Sublime Ones.

Pure One, virtue beggars or female virtue beggars,2 males nearing virtue or female nearing virtue,3 if any of them recites this heart mantra three times every day, I will always follow that person. I will provide all the needs of that being. I will even look for their food, clothing, precious jewels, gold, possessions, grains, silver/money. I will complete all the purposes of that living being. I will let all sentient beings be under the control of that being. I will complete all the various activities of that being in that moment, except for those engaged in the sexual act.”

By reciting this seven times, success will be achieved. This ceremony is like this: On the 15th of the waxing moon, clean one's own body, wear clean clothing or new clothing, three times offer smoke with the agaro,4 and if you recite 7,000 times this mantra, you will find gold.5

Here, the Zung of Pakpa Norbu Sangpo is completed.

Due to the merits of having made this Norbu Zangpo Zung available in English, and the mantra Norbu Sangpo Zung, may this result in the greatest benefit to all sentient beings. May anyone who, just by hearing this mantra or seeing this mantra — even merely touching this text or keeping it — achieve all the happiness that they are wishing for instantly, including all the wealth they are looking for. May all the wealth they receive and any happiness they achieve cause them to realize renunciation of samsara, bodhicitta, and right view in this very lifetime as quickly as possible. May they train their mind in the two stages of highest tantra on the basis of only pleasing one's own Guru, without displeasing for one second, and may they achieve the unified state of Vajradhara in this very lifetime. May each person who practices this help so many other sentient beings to be relieved from poverty, and give wealth. May all that wealth cause them to generate the good heart in their lives, achieve full enlightenment — complete awakening, in their minds.

1 The king’s son was already king at this time. [Return to text]

3 Males and females living in the five precepts. [Return to text]

4 Name of an incense wood. [Return to text]

5 Lama Zopa Rinpoche suggests that “you will find gold” means that gold is something very rare and precious, so what it means is that you will have success finding the wealth you are looking for. [Return to text]

Colophon:
Translated by Kyabje Lama Thubten Zopa Rinpoche, in September 2005, while staying at Nagarjuna Barcelona, Spain. Notes taken and lightly edited by Claire Isitt. Lightly edited and formatted by Venerable Gyalten Mindrol, FPMT Education Department, April 2006. This mantra was given by Lama Zopa Rinpoche and has not been checked against the Tibetan original.

The Mantra Encompassing the Essence of Kangyur
November 2009

Rinpoche offered the following Mantra Encompassing the Essence of the Kangyur: the Prajnaparamita mantras.

In Sanskrit: shasta saha srika prajna paramita (The Essence of the 100,000 Verses of the Perfection of Wisdom Gone Beyond)

I prostrate to the bhagavans who have destroyed the foes and are endowed with all the qualities of knowledge, encompassing the essence of the perfection of the wisdom gone beyond.

Reciting this mantra it is equivalent to reading the 100,000 verses of the perfection of the wisdom gone beyond.

This completes the essence of the Great Mother of Perfect Wisdom Gone Beyond.

In Sanskrit: pranyaca bid shate saha srika prajna paramita (The Essence of the 25,000 Verses of the Perfection of Wisdom Gone Beyond)

I prostrate to the bhagavans who have destroyed the foes and are endowed with all the qualities of knowledge, the essence of the 25,000 verses of the Perfection of Wisdom.

Reciting this mantra it is equivalent to reading the 25,000 verses of the perfection of wisdom gone beyond.

This completes the essence of the 25,000 verses.

I prostrate to the bhagavans who have destroyed the foes and are endowed with all the qualities of knowledge.

Reciting this mantra is equivalent to reading the 8,000 verses of the perfection of wisdom gone beyond.

This completes the essence of the 8,000.

In Sanskrit: prajna paramitaye (The mantra of the Eighty Thousand Verses of the Perfection of Wisdom Gone Beyond)

Reciting this mantra is equivalent to reading the 80,000 verses of the perfection of wisdom gone beyond.

This completes the essence of the 80,000 verses.

This is the essence of all the tathagatas, the ones gone to bliss.

I prostrate to the Precious Sublime Three.

Reciting this mantra just one time exhausts each and every obscuration accumulated over a hundred million eons.

This completes the mantra, essence of all the tathagatas, the ones gone to bliss

In Sanskrit: arya paramita sanyaca gatha (The Single Collection of the Superior Perfection of Wisdom Gone Beyond)

I prostrate to Arya Manjushri.

This is equivalent to reading the collection of the Arya-Superior.

I directly admire and praise the words of the Bhagavan.

Colophon:
Mantras given by Lama Zopa Rinpoche. Scribe unknown. Lightly edited by Gyalten Mindrol, FPMT Education Department, February 2006. These mantras have not been checked against the Tibetan.

These are the mantras of Prajnaparamita, three volumes, 20,000 stanzas, all three lengths. When there is no time to recite all the text, one can just do the mantras. In Singapore some years ago, one Indonesian man whose business was going down did this and his business improved. So this gives another method for sick people and business people for the works of this life.