Treat Others Peacefully, Be a Good Example to the World

Treat Others Peacefully, Be a Good Example to the World

A student wrote to Rinpoche about her response to the murder of her father and grandmother, and explained how she transformed her anger and then helped her brothers and sisters deal with their negative emotions. Rinpoche sent this advice and requested that his letter and the student’s original letter be shared online so that all could read them. 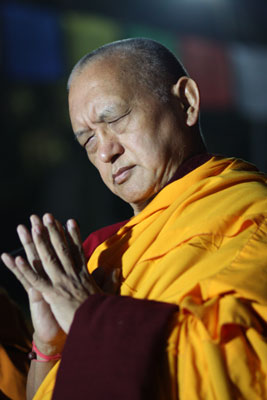 My most dear, most kind, most precious, wish-fulfilling one,
Thank you very much for your kind letter explaining your experience. Since you are a lawyer, what you would do normally, and what other people in the world would do normally, is only think of this lifetime, especially if someone had killed your father. That kind of harm is a huge thing and difficult to bear.

Most people don’t think about karma, reincarnation and so forth, and that all problems come from the mind, from the I. They don’t know that. Or even if they know intellectually, they don’t practice that. So they would put that person whom they called “enemy” in prison or they would kill that person, harm them back or even do worse if they can. That is normally what people think and do in the world.

You were checking your experience for a long time and you realized that it is the result; you experienced the result of what you did in the past to others. The person who killed your father and grandmother was badly treated and harmed by you in the past.

Then you helped your brothers and sisters become harmonious and decide to help, instead of taking revenge. This is the greatest practice. This is what Buddha said to do when somebody harms us. This is what Buddha and what holy beings do in the world, and what bodhisattvas do. If somebody harms us, worldly people say that is an enemy, but instead of harming back, we should only benefit that person. This is what holy beings, bodhisattvas do. Your actions follow that. This is the actual practice.

You made numberless gurus—His Holiness the Dalai Lama, all the gurus, all the buddhas and numberless bodhisattvas—most happy. You and your brothers and sisters made them most happy, pleased them the most. It is the best.

With my two hands together at my heart, I am thanking you and your brothers and sisters a billion, zillion times from my heart. Please tell them I am thanking them. You pleased most His Holiness the Dalai Lama, the Buddha of Compassion, and numberless buddhas and bodhisattvas.

The great bodhisattva Shantideva said in the Guide to the Bodhisattva Way of Life:

My karma persuaded them,
Therefore, I received this harm.
Because of that, didn’t I make the person fall in the hole of the hell?

What that is saying is first why you received this harm. For example, relating to your life story, because you treated a person that way in a past life, the result happened: you received harm, and your father and grandmother were killed. Now the person who harmed you is in the human realm, but soon that will end. Due to that action [of killing your relatives] that person will leave the human realm, and due to that negative karma, they will get born in the hole of the hell. Then they will suffer in the hell realms for an unbelievable, unbelievable, unbelievable length of time. They will endure the heaviest suffering.

So you are not only practicing patience, but developing compassion, by thinking that the person who harmed you, which was due to your negative karma, now has to be born in hell and suffer for an unbelievable length of time. All that started originally from you; you harmed this person. This is a way to develop compassion—thinking about what obliged the person to engage in negative karma, to harm you. So please tell your sisters and brothers this.

Similarly, the Tibetan people want to fight, like in the normal world, fight back at Mainland China, but His Holiness the Dalai Lama advised them to not fight. Without fighting, the truth will win. His Holiness is talking only about peace, in terms of dealing with Mainland China, only dealing in peace. If you fight, what happens is a similar story to what you mentioned. Then you are creating the negative karma to receive harm from others, again and again. Then there is no end to suffering in samsara, no end; not only no beginning, but no end.

His Holiness the Dalai Lama advised that only by being peaceful, only by truth, will the Tibetans win peace. This advice is so important. This way you don’t receive harm back from others. You aren’t attacked by others. You don’t experience war. You get only the result—peace and happiness. If you treat others peacefully, as a result you receive peace and others help you. That is really Dharma practice.

Dear Kyabje Lama Zopa Rinpoche,
… Five days after my ordination, my grandmother and father died at the same event. I felt shocked about losing my father. Just that morning, he had called and asked me if I was happy with the ordination. He was Catholic, but respectful. I replied I was very happy. Then he replied he was happy for me too. That night, he died with his mother in their house. They were poisoned by gas in their house. The gas was coming from the kitchen, and they fell asleep and died. In time, we discovered my father’s first cousin had killed them in order to steal or inherit money and keep it from my family. When we discovered that, it was a great shock. I have two brothers and two sisters. We were very angry.

I was incredibly angry and very confused. Just being ordained, I was trying my best to have a good heart and good thoughts. On the other hand, I was very angry about what happened. Out of anger I decided to go and visit the person who killed my father. I took my purse and started to walk to the car.

Suddenly an image of you, Rinpoche, came into my mind. You were sitting in meditation posture with a beautiful and exquisite smile. At that moment, I started to cry so deeply, and I realized what had happened. Straight away I thought, “Only because of Rinpoche’s great compassion did he ordain me.”

Then I decided not to visit the person who damaged my family. I cried and cried for a couple of days, trying to put all the experience together. I felt that ordination was protecting my mind from seeking revenge, killing, cheating and stealing. I was feeling so protected by you and feeling so, so fortunate, I made the following statement: “From now on, my aim and duty is going to be to reduce my anger. When I am capable of overcoming anger, then I will help my brothers and sisters.”

For many months I did analytical meditation on anger. After one year, the anger had been reduced very much. Then I started working with my brothers and sisters to help them reduce their anger. One day, continuing with analytical meditation, I thought, “Maybe that was family karma.” Then I thought, “If that is the case, that means that in the past we have done the same thing, killing and stealing an inheritance for our own family.”

I imagined killing my own family and stealing from them, and it was difficult to believe, because in this life I have not killed a human being and I had the belief that I am a good person. I continued meditating and analyzing this, and then I had an insight: “I cannot experience anything that I have not created the cause for.”

Again I imagined myself and my brothers and sisters killing someone’s father and stealing their inheritance. Oh, Rinpoche, the biggest pain I’ve ever experienced came, thinking and understanding that in a past life I had dared to kill someone. It was so painful. It’s very difficult to overcome that. By thinking about it over and over, after two years I felt some peace, and I understood that we were experiencing the result of actions that we had created. If we created the cause, we deserved the result.

Then I thought that if we created the cause in another lifetime, in this life the best thing to do is not to put that person in jail, but to offer the inheritance to the person who killed and stole from my family. After many meetings with my brothers and sisters, we decided to give away the money and properties from the inheritance to the cousin who had killed our relatives and not to put her in prison. We decided peace in death is more important than the inheritance, and peace in life is more important.

This story, Rinpoche, is to voice my huge gratitude to you. From the bottom of my heart, thank you so, so much Kyabje Lama Zopa Rinpoche for saving my life and protecting my mind all the time ….