Rinpoche gave this advice to a center that was asking students to take the eight Mahayana precepts on the merit multiplying days (the Fifteen Days of Miracles, Saka Dawa, Lhabab Duchen and Chokhor Duchen) specifically to prevent earthquakes.

When you advertise for people to take precepts on Lhabab Duchen, you can say something like this:

“We are taking eight Mahayana precepts, in general it is for the earthquake, but it is to free sentient beings from the oceans of samsaric sufferings—to free the numberless sentient beings from each realm and bring them to full enlightenment—therefore we need to achieve enlightenment. Therefore we need to collect extensive merits in order to have realizations on the path to enlightenment. So we are taking the precepts not only for earthquakes in this area and in the world.”

Rinpoche typed this letter himself when he heard that thirty young people were taking eight Mahayana precepts at a center on Chokhor Duchen, one of the four great holy days when merit is multiplied. Lightly edited by Ven. Holly Ansett and Sandra Smith.

My most dear, most kind, most precious wish-fulfilling ones,
I want to offer lunch for the people to thank everyone, as they opened their hearts. For general ordinary Tibetans, maybe it’s more for their future lives, to have a good rebirth and to meet the Dharma. For Westerners, young people do it for other sentient beings, at least for this world.

I am so happy that you took precepts. Even though it’s just one day, it’s a most important day, Guru Shakyamuni Buddha’s Dharma [Wheel] Turning Day, which has benefits. Any merit you collect increases one hundred million times.

Reciting OM MANI PADME HUM one time becomes one hundred million merits, like having recited that much. One dollar given as charity to those who are in need becomes like giving [one hundred million dollars], the merits increase that much. One light offering, for example, one tiny Christmas light,  is like a million light offerings. You get that much merit. One prostration is the same, you get all the benefits.

From one negative karma comes a suffering result that we will experience for five hundred lifetimes or one thousand lifetimes, so it’s very important to try to create merit as much as possible.

Without merit there is no happiness and there are so many problems, then people especially get involved in negative karma, such as stealing, killing and so forth. They don’t know about Dharma or karma, and they think only about this life’s happiness.

We are so fortunate, because we come to know where happiness and success comes from—merit and especially from benefiting others.

Thank you very much [for taking precepts.] That makes the center so beneficial for sentient beings, which is the main purpose of the center.

I can offer lunch today or tomorrow.

Rinpoche gave the following advice on taking refuge without the lay vows.

Even if we farm and kill animals, we can take refuge without taking any of the five lay vows. Because Buddha is compassionate, even if we are unable to stop committing major harm, such as killing, we can abandon smaller harmful actions, for example, a second of anger.

The purpose of the vows is to protect our and others’ minds from suffering and to bring peace and happiness for ourselves and others, but if we can’t keep the five vows, there are many other smaller harmful actions that we can stop, such as harsh speech.

If we can stop committing any harmful actions, this offers protection to others and is the root of happiness and peace, so we don’t receive the result of negative karma and we have happiness in this and future lives.

Buddha is so compassionate in the way he guides us, and we can still take refuge in the Buddha, Dharma and Sangha. Even Tibetan soldiers used to take refuge and then go out and do their job. In our case, besides taking the tantric and bodhisattva vows, we still harm others every day with anger, bad words, etc.

Rinpoche gave the following advice to a student to explain some of the benefits of taking vows. 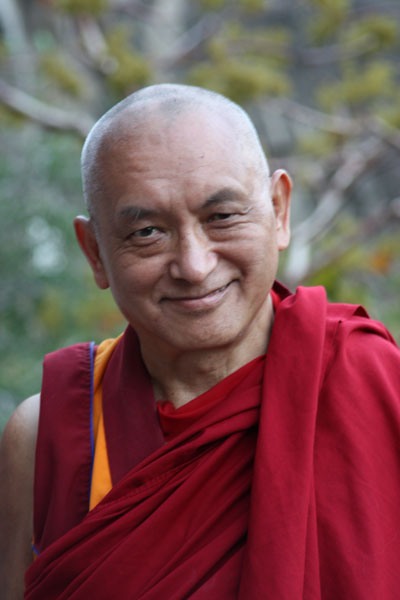 There is a reason why Buddha revealed three levels of teachings: Hinayana, Paramitayana, and Vajrayana, and that they contradict. It is like when a doctor advises, first of all, that a person stop eating meat and drinking alcohol when he or she is sick. Then, when the person recovers from the disease, the advice changes, depending on the person’s health. Therefore, the advice is contradictory, but not for the well-being of that person. So, too, with the three levels of teachings. Another reason why Buddha taught different levels of vows is because there are different levels of beings. Similarly, Buddha offered different levels of ordination.

In the Pratimoksha, seven negative actions are emphasized. In the bodhisattva path, a bodhisattva, with brave compassion, can go to the hell realms and exchange his or her happiness for the suffering of other beings. The Paramitayana texts prohibit drinking alcohol or eating meat, but in tantra, when you reach the level of the illusory body and clear light, drinking alcohol becomes a cause to see the clear light. When this level is reached, when there is no danger of your falling to the lower realms, it only becomes a cause to see the clear light and eliminate delusion and the subtle negative imprint which projects the inherently existent view. At that time, you practice the wisdom mother and drink alcohol, because it only benefits the yogi, and helps him or her to achieve enlightenment and to lead others to enlightenment.

So, a person takes the Pratimoksha vows and progresses until he or she does not find one single attraction in samsara, even in a dream. Then, upon that, bodhicitta is developed. Then, upon that, the gross and subtle generation stages and the completion stage are practiced. But if you haven’t reached the level of completion stage, and can’t use the wisdom mother and the great bliss for the clear light, then there is danger. Similarly, there is danger when you don’t have bodhicitta, you have self-cherishing thoughts, and you can’t remove the seed of subtle imprints. Then, you have to suffer and sentient beings have to suffer for so long. The more bodhicitta you have, the more realizations will come.

Denma Lochoë Rinpoche explained the following about taking vows. He said that if you have taken vows to refrain from committing certain actions and you abide by that, you receive benefits and merits. However, if you refrain from committing certain actions without having taken the vows, you do not accumulate the merit. For example, to be born as a human being you need the preliminary cause of pure morality. This means having taken vows in the past and living purely. Then, in the case of a perfect human rebirth, this means having practiced charity. To have the opportunity to practice tantra, and to attain enlightenment in one life (in highest yoga tantra, enlightenment is possible in three short years) comes from having practiced pure morality in the past. If we don’t take vows, then we don’t receive the benefit of abstaining from these actions, day and night, even when we’re asleep.

The minute we take the vows (until death for Pratimoksha vows, and until enlightenment for bodhisattva and tantric vows), day and night we collect merit all the time by living according to those vows. It is a cause to receive a good rebirth in your next life. If it is performed with renunciation, it becomes a cause to achieve liberation from samsara. If it is performed with bodhicitta, it becomes a cause for enlightenment. Then, day and night become a cause for enlightenment and to enlighten sentient beings. In the Mahayana practice, the goal is not just to achieve enlightenment yourself, but to lead all beings to enlightenment. Your goal is clear.

If a person is locked in a house alone and there are no insects in the house, he or she cannot kill anything. The person doesn’t commit the action. But that doesn’t mean the person creates the cause of a higher rebirth. However, if this person had taken the vow not to kill, then day and night he or she would create merit and progress on the spiritual path. By living according to vows, you have the freedom to practice the vows.

Most worldly people base their lives around eating, sleeping, and getting married. They do not live according to vows. People who live according to vows collect merit all the time, collecting the cause for happiness in hundreds of thousands of lives. But without the vows, and if they have self cherishing thoughts, then they are continuously creating negative karma.