Rinpoche sent blessed water and materials to a student who was nearing death and advised how to use the substances.

Familiarize yourself with Practicing the Five Powers Near the Time of Death.

The following is information from Rinpoche about the materials that you have received.

Small bag with precious pill powder: This is a very, very special pill crushed into powder. Take a little each day. It contains thousands of special relics and blessed pills.

Chung nga: These are pills for naga harm, which is a condition for cancer. Take five pills each day.

Namgyalma protection: Wear this around your neck at all times. Try not to sleep against the mantra and take it off when you bathe.  When you sleep, just keep it beside you on bedside table.

Prayer wheel to be worn around neck: The prayer wheel contains millions of mantras. You may turn it from time to time. Take it off when you sleep and also when bathing. Whoever is looking after you at the time of death can place the prayer wheel to the crown of your head.

Mani pills: These are blessed by His Holiness the Dalai Lama and thousands of monks. Take a few of these each day.

Packet of pills: Contains Guru Rinpoche pills that came from the Maratika cave in Nepal where Guru Rinpoche achieved immorality. Take one pill each day

A student with health issues wrote to Rinpoche asking for life practices. Rinpoche advised Amitayus long-life mantra, the five powers and other practices.

My most dear, most kind, most precious, wish-fulfilling one,
I am very sorry for the very long delay in replying to your email. It comes out very good for your long life to recite Buddha Amitayus mantra 100,000 times.

In Liberation in the Palm of Your Hand in the section on the Seven-Point Mind Training practice, there is one practice, a whole lifetime of practice, integrated into the five powers, so try to learn these, study these. [See Liberation, pp. 612–16.] Also read Practicing the Five Powers at the Time of Death. Think of these five powers and try to understand how important it is to practice these five powers as a lifetime practice, integrating your lifetime practice and the five powers at deathtime. We have to plan, to practice that way for when the death comes. Death can come any day for any of us, and so many people even today in the world die unexpectedly.

Do prostrations every day by reciting the Thirty-five Buddhas. Concentration is important; if you have no concentration then it just becomes physical exercise but does not become Dharma. To become Dharma the motivation to do prostrations has to become Dharma, so it’s not for the happiness of this life or our future lives in samsara. The practice has to be done with renunciation of samsara, so it becomes the cause of liberation from samsara and doesn’t become the cause of samsara. It should also be done with bodhicitta, so each prostration becomes the cause of enlightenment for sentient beings, to free the numberless sentient beings from each realm from the oceans of samsaric suffering and bring them to enlightenment. You can see now how it is most important to do each prostration with bodhicitta as much as possible. Also with emptiness. The easy way to mention is that you are doing prostrations in a dream. This means you see you are doing prostrations, but they are not truly existing from their own side. So like that, like an illusion.

Please make your life most meaningful with the thought of bodhicitta day and night.

A student was experiencing ill-health, had lost weight and was feeling weak and tired. A geshe had told the student that death was approaching. The student was afraid to die and asked Rinpoche for advice. 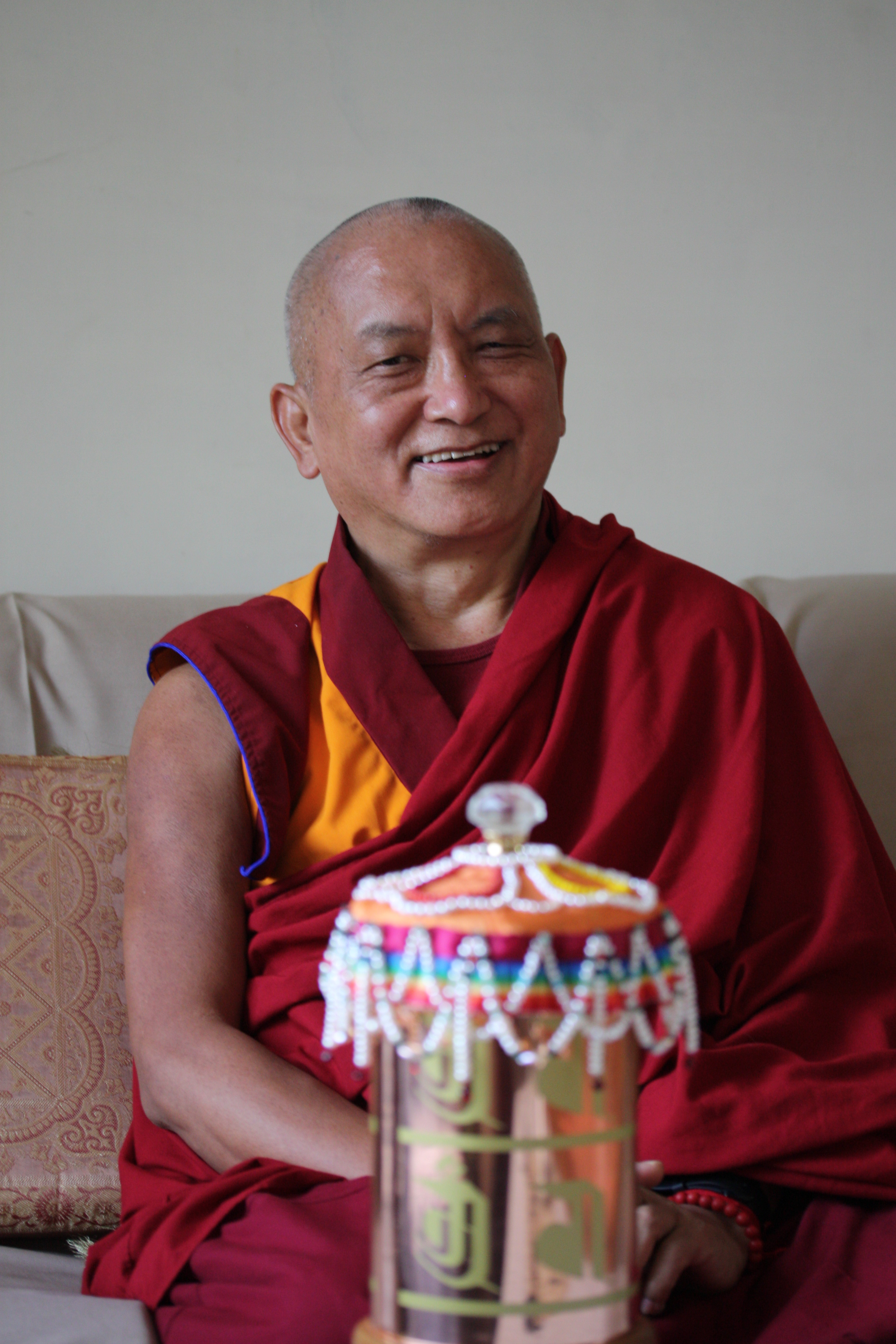 My most dear, most kind, most precious, most wish-fulfilling one,
I am very sorry it took so long to reply to your email. I checked your life and according to my observation this year is good; next year maybe you will have some difficulties, either sickness or something, then the year after that there are more obstacles, it’s looking bad.

I also advise the five powers, which integrate a whole lifetime of practice. The five powers are in Liberation in the Palm of your Hand, and you should learn them as your main practice. This topic is in the section on thought transformation after bodhicitta [Liberation, pp. 612–16]. Please put effort in this practice, which becomes real Dharma practice according to Mahayana and becomes the foundation for practicing tantra. [See also FPMT eBook: Practicing the Five Powers Near the Time of Death.]

If you are familiar with self-initiation, there is elaborate and short self-initiation. If you are not familiar with it, you can discuss with other students who have experience. If not, then at the end of the day do Vajrasattva practice, one mala or half a mala or at least 21 mantras, with the remedy of the four opponent powers. That becomes powerful purification, not only to purify that day’s negative karma, but also the past life’s negative karma and the negative karma and obscurations collected since beginningless rebirth.

The Guhyasamaja root tantra text came out good for you to recite if you can. If not every day, then recite it from time to time.

Try to go to bed with a comfortable mind after purifying with Vajrasattva and if possible recite the Thirty-five Buddhas practice one time and then if you can, do one dedication, for example, the King of Prayers or Lama Tsongkhapa’s Prayer for the Beginning, Middle and End of Practice. From the eight prayers, do one of them. You can do a different one each day. You can try this, it is very good, but it’s very important when you recite the prayer to pray mindfully, because this plants a seed in your mind.

This is my advice. The other important thing is to live your life with the motivation for others as much as possible. Thank you very much.

P.S. You don’t need to be afraid. We are Buddhist and we are so lucky. We have found the most worthwhile object, the perfectly qualified object to guide us: Buddha, Dharma and Sangha. If we take refuge in Buddha, Dharma and Sangha they definitely guide us, and we don’t need to fear the lower realms. By taking refuge there is no need to be afraid of death, especially if we are practicing bodhicitta.

Rinpoche sent this message to a student with atrial fibrillation who was being taken to hospital. The student thought they may not live as their heartbeat was extremely fast. Note: the student did survive.

Then visualize a very fine thread of red light going from Vajrayogini on the crown of your head down to Vajrayogini in the mustard seed [at your heart.]

That red light hooks Vajrayogini in the mustard seed, and Vajrayogini comes up, which immediately brings you up into the heart of Vajrayogini [on your crown.]

Then you hear all the dakinis and dakas doing prayers and songs, and you meditate on bliss and voidness.

Rinpoche gave this advice to a student who had helped build prayer wheels at a center and was very close to dying due to cancer.

My most dear, most kind, most precious, wish-fulfilling one,
Thank you very much from the heart for all the positive things you did in this life, especially making the prayer wheel and all those things. All the positive things that you did with your body, speech and mind were for the benefit of sentient beings, so I appreciate that very much. You should rejoice in all that. By doing that all your past negative karmas are purified, already purified, think that.

Don’t worry, only think about Amitabha Buddha and to be born there in the pure land. If you make requests to Amitabha, without doubt Amitabha will guide you there. Just think this.

Thank you very much. As you know, we all have to die soon.

I have also made prayers for you.

A long-time student was close to passing away due to cancer and had written to Rinpoche just to connect with him. Rinpoche sent this reply back with instructions on powa, the transference of consciousness at the moment of death.

My most dear, most kind, most precious, most wish-fulfilling one,
Thank you very much your kind letter.

Yes, you are supposed to die soon, however I might die before that, we can't really say. Sometimes people are dying in the hospital and the people who come to see them think that they themselves are healthy, but in the end they die before the sick person in hospital, so it often happens like that.

Please remember the advice I gave you before, keep thinking that, if it was Guru Vajrayogini, then just that. Think even the place where you are is Guru Vajrayogini’s holy place, Dagpa Kachö.

Every day think that Guru Vajrayogini is above your crown and there is a pipe or beam coming down and reaching close to your navel, then inside that is your consciousness, the size of mustard seed. It's like cotton, extremely light, so it can easily fly up at any time to Vajrayogini's heart, which is above your crown.

Feel oneness with Guru Vajrayogini, the dharmakaya, transcendental wisdom of great bliss, non-dual with emptiness, like skies of bliss, feel that. Then as Vajrayogini shoots up and goes straight to Vajrayogini’s pure land, Dagpa Kachö, the dakas and dakinis do prostrations and offer music and chanting for you, and you abide in the lotus receiving teachings from Guru Vajrayogini.