Rinpoche advised these pujas for students at a Dharma center so they could create the karma to get an apartment.

Rinpoche sent this card to students at a center. 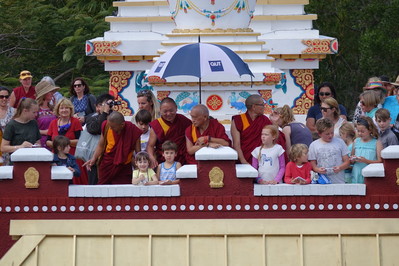 My most dear, most kind, most precious, wish-fulfilling students and brothers and sisters,

How are you? I hope everyone is happy, because of having found the most precious human rebirth and having met the Dharma, Mahayana Dharma. This means Mahayana teachings and lamrim, which show how to practice Dharma—the Hinayana and Mahayana sutra and Mahayana tantra taught by Buddha, the graduated practice to achieve enlightenment.

Please continue to make your life most beneficial for every single sentient being—for the numberless ants, numberless mosquitoes, numberless insects, numberless fish in the ocean, and the smallest insects—so that means naturally for yourself, by the way.

Live life with bodhicitta, for sentient beings. Thank you very much, I hope to see you soon.

This advice about the benefits of feng shui was given by Rinpoche to all FPMT center directors. Rinpoche also asked the centers to put up a picture of His Holiness the Dalai Lama, in order to create the causes for him to guide us.

Dear center directors,
The main cause of success and difficulties is good karma and negative karma, but there are external conditions for success and prosperity, and also for problems.

The correct feng shui is set up inside the house and in the external environment, by placing cures for a disturbing environment. This is done in order to bring success and to stop problems. These are the conditions. However, when good karma is very strong, the external and internal conditions naturally change due to the power of this good karma, even without any idea of feng shui.

Having an understanding of feng shui helps, therefore I am sending this book [about feng shui] to all the centers, especially for those centers where there is a lot of disharmony and many financial problems. This can help to solve these things, depending on how extensively correct feng shui is done. Feng shui can even help the FPMT centers that have been developed for many years and are doing quite well due to much purification, merits and correct Dharma understanding.

Within the organization, we are building retreat centers and setting up city centers, so we need many things for success, to benefit Dharma. When there is much harmony, stable finances and things are going well, people can have more space in the mind to develop compassion and a good heart. In this way they are able to continue their practice without much pressure, worry and fear about running the center. Also, they will be more mentally clear and physically healthy.

Of course, for bodhisattvas the harder it is the happier they become, because they have the opportunity to sacrifice their life and bear hardships for others.

I feel that the first, best and biggest benefit, and the main solution, is Dharma. I think feng shui is the next most important solution to help others and to stop the normal problems that people always talk about, such as their relationships, jobs, health, education, wealth and long life.

I would also like to request all the centers to put a picture of His Holiness the Dalai Lama in the south-west part of the director’s office at the center. This is to create the causes for His Holiness to guide us.

Thank you very much and have many, many, far-out good luck.

Rinpoche gave this advice to a center director for success and protection of the centers in the area.

My most dear, most kind, most precious, wish-fulfilling one,
Please read the Golden Light Sutra five times in each month. This can be done as a group at the center, or individually, for success of the center. This will enable people to connect to the center but it also depends on the other teaching schedule. When reciting the sutra, it is important to meditate on the meaning, so recite it skillfully.

If there are many people coming to the center it is good to do social service. Also pray to Medicine Buddha or Tara.

To protect from pollution, it’s good to have Lama Atisha stupa protection. [You can find the downloadable Lama Atisha Protection Mantra at FPMT's Foundation Store.]

It is also often with the Namgyalma protection. This will protect people in the place from pollution, so you don’t get pollution from people who have broken samaya with the guru. The Namgyalma Protection Amulet you wear has both. You can wear it, but also put it in the gompa to protect the place.

Thank you very much. Try with a good heart and bodhicitta.

There was a rumor that someone at a Dharma center had a weapon. Rinpoche gave this advice.

My dear ones,
I hope you are well. I am now back in the USA for checking my health, medical and dental. It seems I have to check almost every piece of me.

What I would like to express is that all the 84,000 teachings of Buddha—I think the Buddha taught more, but these are the main ones—are to subdue the mind. Even one letter is not wasted.

As the Kadampa geshe said, even one letter of the Buddha’s teachings is to subdue the mind. Why? Because if the mind becomes negative the result is hell and if the mind becomes positive it brings us to enlightenment. The mind creates samsara. A negative way of thinking brings problems, however, if we have a different way of thinking, a happy way of thinking, then no problems. So, all the Buddha’s teachings are to subdue the mind, to stop harming and to develop compassion. This brings all the happiness up to enlightenment.

We should abide by the four virtuous trainings; this is what we should practice. If someone harms us, we should not harm them back, and so forth. Especially in retreat—the real meaning is subduing the mind, not just reciting the mantra.

There is a Tibetan saying that we should not retreat facing outside; in retreat we should be facing inside. This is not a complicated thing; this is a simple thing we should do. We should practice patience.

Thank you very much for understanding. This is my advice.

In this advice given to a Dharma center, Rinpoche explains the essence of the Buddha’s teachings. Rinpoche also advises the benefits of precious mantras that enable us to purify negative karma and collect merit in order to achieve enlightenment quickly.

The purpose of the Buddha descending to this world is only to save us sentient beings from the lower realms and from the higher realms (deva and human realms) by revealing the teachings, such as refuge, action and result (from virtue happiness arises and from nonvirtue suffering arises), such as the ten virtues and ten nonvirtues, and bringing us to the ultimate happiness of liberation from samsara forever by revealing the three higher trainings (the higher training of morality, of concentration and of inner wisdom). Then, not only that, by revealing, of course, the four noble truths: true suffering, true cause of suffering, true cessation of suffering and true path.

Then, by revealing infinite compassion to all sentient beings, great compassion to every sentient being, with that as the preliminary, revealing bodhicitta. Thus we enter the Mahayana path through that door, by following the six paramitas, and we can achieve full enlightenment (sang-gye: the total elimination of the obscurations and completion of all the realizations) in order to free the numberless sentient beings—numberless hell beings, hungry ghosts, animals, human beings, suras, asuras and intermediate state beings—not only in this universe, but in the other numberless universes.

The Buddha revealed Kriya Tantra, Charya Tantra and Yoga Tantra so that we can achieve buddhahood, sang-gye, on this body, in order to liberate the numberless sentient beings and bring them to full enlightenment quicker. And the Buddha revealed Highest Yoga Tantra so we can achieve buddhahood, sang-gye, in a brief lifetime of the degenerate time, within a few months or years. This is based on unbelievably strong compassion for all sentient beings, because it is unbearable that they are suffering in samsara and obscured.

After this is the one-syllable Prajnaparamita, AH. In Sanskrit, this is a negative word meaning that no phenomena has true existence. It means that for our hallucinated mind, I, action, object, all the phenomena—hell and enlightenment, samsara and nirvana, everyday happiness and problems—appear to be existing from their own side, appear to be real, and without doubt we trust they are true. The concept believing totally that the I and aggregates are existing from their own side, that they are real ones, is the root of samsara, of the oceans of samsaric suffering. All the delusions—ignorance, anger, attachment—that arise from this wrong concept are totally false, totally wrong. So AH shows that everything is empty of the real one, [empty of true existence.]

This is a very precious mantra taught by the Buddha in the Sutra of Manifesting the Great Water [Tib: chu lung lo pai do.] It is said by the Buddha that each time you see this mantra you purify 100,000 eons of your negative karma. It’s the power of this mantra. It comes from the Buddha’s infinite compassion for us and omniscience, understanding by the omniscience.

The other mantra, OM MANI PADME HUM, is the mantra of Chenrezig, the Compassion Buddha. It contains the Hinayana teachings (the four noble truths), the Mahayana sutra teachings (bodhicitta, the six perfections and so forth), and the whole path containing all four levels of tantric teachings. All that is contained in MANI PADME, which means method and wisdom. HUM is persuading Chenrezig’s holy mind, saying “Hi!” and is also to establish devotion, the root of blessings in your heart. Then you achieve the method and wisdom paths signified by MANI PADME.

You purify your ordinary body, speech and mind and achieve Chenrezig’s vajra holy body, holy speech and holy mind, which is signified by the three sounds, or letters, O, U, MA. Also it signifies that your ordinary death, intermediate state and rebirth are purified by reciting this and meditating. It purifies the mind. Reciting this purifies your ordinary death, intermediate state and rebirth, which is signified by O, U, MA. You then generate the path three kayas (dharmakaya, sambhogakaya and nirmanakaya) and achieve the result three kayas for sentient beings. This is the most powerful way to purify the negative karmas collected during beginningless rebirths and to collect the most extensive merits, more than the drops of water or sand grains of the Pacific Ocean and so forth. It is a quick way to develop infinite compassion toward sentient beings and a quick way to achieve enlightenment and also a quick way to be born in the pure land.

This mantra taught by the Buddha, the Stainless Pinnacle Lotus mantra, if it goes on the body it purifies 10,000 eons of negative karma. So this is very good to put on the head; this is how it is used. It has many other benefits, such as bringing success and healing. If a fully ordained monk has broken all four root vows and has been born in hell, thinking of that person and reciting this mantra has the power to liberate that person from hell and bring them a higher rebirth.