Advice on the benefits of writing the Prajnaparamita sutras and offering to holy objects. Rinpoche requested that this continues after he passes away. This advice was given during a teaching in Bendigo, Australia. 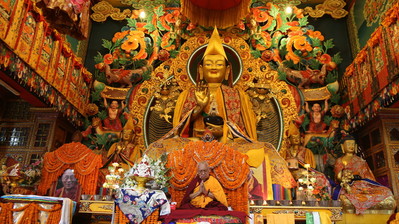 Offering one grain of rice or a tiny flower to a picture of the Buddha or a statue of the Buddha, small or big, the benefits are that it brings us up to enlightenment and then we are able to free numberless sentient beings from the oceans of samsaric sufferings and bring everyone to enlightenment. Just by making skies of offerings to numberless buddhas for eons.

Now here, writing one word of the Prajnaparamita, the teachings on emptiness, we create far greater merit than making that many offerings, skies of offerings to numberless buddhas for so many eons.

The benefits are incredible. I read them before I recite the Diamond Cutter Sutra.

My idea is that not only during my life; my idea is even when I die, even when I’m dead, that work, writing the Prajnaparamita texts, can be continued.

My idea is that even when I’m dead [for students] to continue this gold writing as much as possible; for it to continue even after I’m dead. I didn’t have that idea at the beginning, but for the last two or three years I’ve had that idea, to do it all the time.

So like that, I thought to continue the gold writing of the Prajnaparamita.

I would also like [the organization] to continue, after I am dead, making offerings to the stupas, Boudha Stupa and Swayambunath, and also to the Jowo statue in Tibet and the Buddha statue in Bodhgaya, offering robes and offering gold every month. So for these offerings to be continued by the organization, even after I’m dead.

[Read about Rinpoche's resumption of writing the Prajnaparamita on this FPMT blog.]

Advice about the unbelievable merit of making offerings to the Sangha when we have the correct motivation and see them as pores of the guru. The advice refers to offering to monks at pujas, however, it also applies to nuns and lay people who are disciples of our guru. 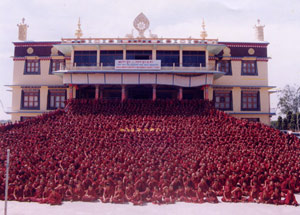 After generating a motivation of bodhicitta, think, “The purpose of my life is to not only achieve nirvana for myself but to free the numberless sentient beings from the oceans of samsaric suffering and bring them to peerless happiness—the total cessation of all the obscurations and the completion of all the realizations—by myself alone. Therefore, I must achieve enlightenment. Therefore, I am going to make the offerings to these monks.”

Whatever offerings you make—rice, tea or any other offering—to the Sangha or even lay people, who have the same guru, you think like this.

Before you make the offerings, think in this way.

First generate bodhicitta motivation, so it is not enough to achieve happiness only for oneself, to be free from samsara. We have to do this for all sentient beings, therefore we have to become enlightened. In this way, generate the best motivation.

For example, offering even one cup of tea, or a piece of bread, or sweet rice, or even a dollar; offering this to just one disciple of the same guru you collect the same merit as having made offerings to numberless buddhas, Dharma, and Sangha, as well as numberless statues, stupas and scriptures.

Making offerings at the large monasteries where there are many Sangha—1,000 monks, 2500 or 3000 monks—you collect the most amazing, powerful merit; you create incredible, powerful good karma to achieve enlightenment quickly. Even offering one cup of tea, one piece of bread, one rupee, one dollar. It is incredible!

Often people remember to offer to the Tibetan monasteries, but maybe not so much to the Western Sangha. I think that is not logical! Sometimes more faith arises in Tibetan Sangha rather than in Western Sangha—maybe people don’t realize that their lives are the same, the vows are the same. We should have faith in any country’s Buddhist Sangha; we should have the same faith.

But not just at the monasteries; at your center also. You can do so much at your own center, right there, by thinking you are offering to the same guru’s pores. You collect unbelievable good karma. By giving even a glass of water, or offering tea or snacks at the puja, or even at a meeting—if they are your guru’s disciples, it is very powerful. You must know this. This is how you generate so much good karma. Don’t just leave it to intellectual understanding; you must practice.

By offering even to one Sangha, whatever you can—even one dollar, one cup of tea, one piece of bread—there is so much merit. And when it is to larger monasteries where there are several thousand monks, it is unbelievable merit.

As I mentioned, thinking that they are the disciples of the same guru, the pores of the guru, such as His Holiness the Dalai Lama, then we collect the highest merit, the most extensive merit. This is the greatest way to purify and the quickest way to achieve enlightenment.

It helps sometimes if we hear how much a puja costs.

This is just to educate you, by the way.

A group of sixteen retreatants had completed 100,000 water bowl offerings together and offered their practice to Rinpoche. They asked if they could do other preliminary practices in the same way, doing the practices as group and counting what they had collectively done.

My most dear, most kind, most precious, wish-fulfilling ones,
I would like to thank you all and to offer you ice cream and potato pancakes from Solu Khumbu and thin pizza (not thick) and vegetarian momos—inside with nothing, just empty space, but having the most taste with bliss and voidness—or you can have spaghetti, and inside bliss and voidness.

In Tibet this happened. There was a great lama in Amdo, I’ve forgotten his name, who went to the monastery to look for the text on Gyalwa Gyatso. Kirti Tsenshab Rinpoche advised of this. So this lama explained that in Tibet he put up a big tent and then many people made the water bowl offerings together. Then they offered them all together, so that means even though all the water bowls weren’t done by each person, the group counted them together. The lama used this technique in this way to finish them. Therefore, when you make an offering, you can offer even what has been offered by others.

I think similarly you can do this for light offerings. For example, even though many people have worked making the butter lamps and so forth, when you offer them you can offer them all and count them all. Like the water offerings, you can count all of them together.

I dedicated this for everyone to achieve enlightenment as quickly as possible.

Rinpoche sent this letter to a benefactor who had made offerings to a center and to the Sera Je Food Fund. [This fund offered three nutritious meals daily to all the monks at Sera Je Monastery, India, for over twenty-six years. See also the Supporting Ordained Sangha Fund.]

My most dear one,
I think you may already know this or have heard these examples, but anyway, in the past one man who had nothing offered medicinal food just one time to four fully ordained monks. These monks were not arya beings who had wisdom directly perceive emptiness; they were just ordinary Sangha. Due to the karma of making that offering one time, after he died, he was reborn as a most powerful and wealthy king in India, called King Kashika. That was the result of offering just one time.

Of course, the karma goes on and on, as I explained previously. Karma is expandable, it is most amazing, and depending on your motivation you can create the cause of achieving enlightenment, especially if the action is done with bodhicitta.

In the Buddha’s teachings it is mentioned in the Mantra of Undying Drum Sound:

If you devote to the Unimaginable Ones (Buddha, Dharma and Sangha, who have unimaginable qualities)
The ripening aspect of the result of that devotion has unimaginable benefits.

Also, it is mentioned in the Compassionate Buddha Sutras:

Offering to the Buddha, Dharma and Sangha is unbelievable. So you should think like this when you give the money. You should think this is offering to Buddha, Dharma and Sangha. Think that it is helping the Sangha, who, of course, do the Vinaya practice of confession practice here—all the Sangha gather here and also there are teachings at the center. So you should think that helping the center is also helping His Holiness the Dalai Lama and helping Lama Yeshe and myself, the small Mickey Mouse’s wishes to be fulfilled.

Even giving one rupee offering to the center has these benefits. Then of course it also has the benefit of preserving the Dharma and helping to spread the Dharma.

Every dollar offer to the center—even one dollar, even the smallest amount of money—has all these benefits, which is received by all sentient beings. So every mosquito, every fish, every pitiful chicken that is taken on a truck to be killed, every sentient being in numberless universes receives this benefit, as well as every deva, sura and asura. So please think about this and understand this.

Thank you very much. Thank you, thank you. Thank you so much for thinking this way. I hope to see you soon.

Rinpoche explained how to dedicate a money offering to a student who was about to sponsor a very large puja and make a large donation to a monastery. The student was offering the money on behalf of Rinpoche.

The way you dedicated the money, through me, collects the highest merit, so think,

I will dedicate it for sentient beings, for the best way to free the numberless sentient beings from the oceans of samsaric sufferings and for them to achieve enlightenment quickest.

I dedicate for the long life of His Holiness the Dalai Lama and for all His Holiness’s holy wishes to succeed. And for the FPMT, the whole organization always to be most wish-fulfilling for His Holiness, also for me to become like that; for the success of the two Maitreya projects, in Bodhgaya and Kushinagar; and for all the projects in FPMT, especially building big statues. May that benefit the rest of the world and bring benefit to the numberless sentient beings, in order to collect merit and purify the defilements and achieve enlightenment as quickly as possible.

May all students be free from all the sufferings of body and mind, and may all their wishes succeed according to the holy Dharma. May all their actions become the cause of enlightenment, and may they be able to achieve all the realizations of lamrim, sutra and tantra in this life.

Most importantly, dedicate for your mother who died a long time ago—if she is in a lower realm or higher realm, but has not met the Dharma—may she be born in a pure land where she can be enlightened or at least receive a perfect human body and meet the Mahayana teachings. May she meet a perfectly qualified Mahayana teacher who reveals the unmistaken path to enlightenment and by pleasing the virtuous friend may she achieve enlightenment as quickly as possible.

When Rinpoche was at his home in Aptos, California in Oct-Nov 2015, he created a new flower offering card. This was made into a large sign which was placed in the extensive gardens at Rinpoche’s house. Rinpoche has said that anyone can use this where there are many flower and water bowl offerings. 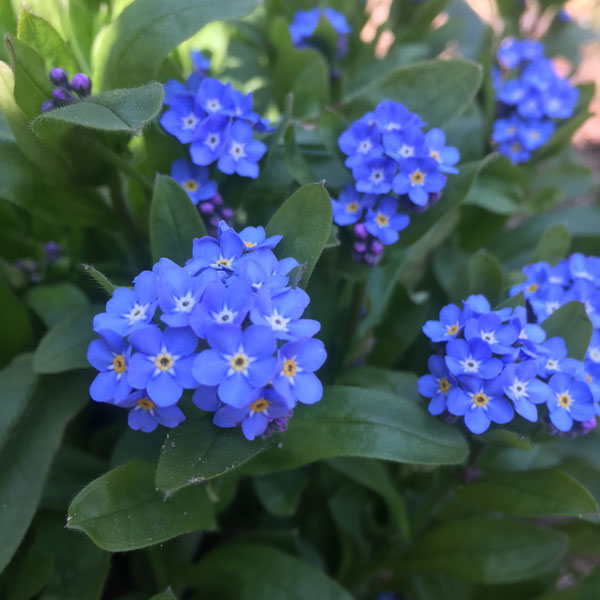 [Note: The card is available from FPMT’s Foundation Store.]