A Healing Hut in Lahaul

A Healing Hut in Lahaul

Rinpoche sent this letter to a government official from the Lahaul and Spiti district in Himachal Pradesh, India. Rinpoche wrote about his wish to build a rotunda or room for healing the sick and explained the Method to Transform daily practice. 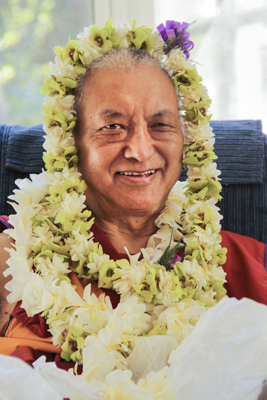 My most dear, most kind, most precious, wish-fulfilling one,
I was very happy to have met you again and to be able to speak more to each other and to be able to express my wishes for what I would like to achieve that would be beneficial for the people for healing and purification.

I thought to mention it again—my wish is to build a structure like what they have in big parks, like a rotunda or room, where people go and sit when it rains, or where they can sit together under a roof and have tea. The idea is to have a nice roof and a room for small groups of people. My thought was to build one like this in Garsha, not far from the road, so there is very easy access for many people to gather and to come inside.

Then for the inside ceiling of the building, the most important thing is for it to have lots of protections on it. One is the mantra of the long-life deity Namgyälma. This mantra is extremely powerful for purifying negative karma. The plan would be to cover the ceiling with that mantra, making it very big. By having this on the ceiling then even insects that come inside, even mosquitoes and flies that come inside and go under the protection also get purified of all their obscurations and negative karma collected from beginningless rebirths. This is where all the sicknesses and spirit harms come from.

Regarding spirit harms, there is one called landlord or naga that is living under the earth, then in the middle there is the spirt harm called king or tsen, and in the sky or space there is spirit harm called day or za, so they give life problems, as well as catastrophes and sicknesses, etc.

In this way, by going under the mantra all the obscurations get purified, just by being inside this room and under the ceiling where the Namgyälma mantras are.

I would like also to put big mantras of the Stainless Pinnacle Lotus mantra, to completely cover the ceiling. Just by going underneath this mantra, it purifies one thousand eons of negative karma. This is the same mantra that we usually put above doors, but here there would be many, not just one, that cover the ceiling. The mantras can be on top of each other or in the ceiling, they don’t have to be exposed. By having this mantra there is great purification from sicknesses and spirit harm that comes from human beings and non-human beings. All this gets purified. This is the main solution when we practice Dharma; this is what happens.

There’s another mantra to have inside nice cloth bags or brocade, to have the bags filled with mantras. The idea is so that a person can sit under the mantra-filled bags on a chair or bench. The mantra to have inside these bags is the special mantra that liberates from bondage from these beings, [the harmful spirits] which I mentioned above, the three types of beings. This mantra causes us to be free from the harm and sickness that comes from the bondage of these spirits.

Many sicknesses that people have come from or are related to conditions of spirits. So by somebody sitting underneath this mantra, it liberates them from the bondage caused by the spirits.

I thought to do this in Garsha because there are many sick people there. When I stayed there, near the end of my time there were so many sick people with headaches or feeling suicidal who came to see me.

Usually when someone is suicidal it is actually connected with spirit harm. In the West they don’t know this yet, they haven’t discovered that the mind can be influenced by spirits, that it is a great danger. There are many things not discovered in the West, especially those that are caused by the strong condition of spirits and so forth. Of course, the main cause is karma and delusion. There are some psychologists and doctors who are starting to see the connection of the mind and health. One couple wrote a book that said cancer comes from an unhealthy mind, from a sick mind. Nowadays many more people are discovering this.

It was very kind that you expressed to help with the land, in order to build this. I was not expecting this, I was mainly thinking to build this by myself. I did meet a Buddhist family in Garsha, and I had dinner at their place before I left. They said if I wanted to build a monastery there then they would help me. One of their daughters is a doctor and their son is running a hospital in Kullu. I haven’t talked to them yet. But if you can help to find land, for sure I thank you very much. I would need to come to Garsha to find the place and then to arrange to build the structure, and for that I would first have to talk to architects and builders and make a plan.

Then I wanted to send you the practice, The Method to Transform a Suffering Life into Happiness (Including Enlightenment). It is a meditation, not only a prayer. This is actually the best psychology, the best protection for our life, to be saved and liberated from bad transmigrations, from being born in the hell, hungry ghost or animal realms, and then experiencing the heavy suffering that comes with that. This is to protect from that, which we have already experienced numberless times from beginningless rebirths, all these different sufferings.

If we don’t have the opportunity to learn Dharma, to practice and actualize the path and the four noble truths, to realize true suffering, the true cause of suffering, the true path—the wisdom directly perceiving emptiness—and the true cessation of suffering. Until then, we have to reincarnate in the six realms without end. The other three rebirths as a human being, asura and sura are still suffering, still in the six realms of suffering, which are not only beginningless but also endless. Wow, wow, wow! This is the same for us and for all sentient beings. Even many Buddhists do not understand this, besides the numberless sentient beings who are not Buddhists. They have no idea at all, but this should be the greatest fear.

So we need to bring them to the total completion of all the realizations, which in Tibetan is sang gye. Sang is elimination and gye is developing. This is so important, the most important thing, so urgent. What ordinary people think is important is to complete their education, make money and get a good job, but this is much more important than that. This is transforming the mind into a positive, virtuous, happy mind from a negative, unhealthy, impure mind. This is what causes us to be reborn in the lower realms and to experience the heaviest suffering and depending on the karma, that suffering can be for eons.

Thinking [with a] positive, pure, Dharma, healthy mind, brings a good rebirth, a happy life and success in the next lives. Then to transform into even more positive thoughts of renunciation, contentment, inner happiness, real happiness, ultimate happiness, liberation from the oceans of samsaric sufferings forever, and to protect from the negative mind, the impure, unhealthy mind that is attached to samsara and which brings continual suffering in samsara, the deva and human beings’ suffering, and even the general sufferings of samsara, such as the suffering of pain and the suffering of change—which is what all samsaric happiness is; it is temporary and in the nature of suffering—and the all-pervasive, compounding suffering.

The next thing is to transform the mind into bodhicitta, the precious thought of enlightenment. With that mind not only when we meditate, listen to teachings, study Dharma, but even when doing normal activities such as eating, walking, sitting, sleeping, doing our job, it all becomes the path to enlightenment, buddhahood, and not only that, it becomes the cause of happiness for numberless sentient beings to achieve full enlightenment.

So with this bodhicitta motivation, going somewhere, for example, from here to Tibet, or from Delhi to Garsha, each step becomes the cause for us to achieve enlightenment for sentient beings, the peerless happiness and each step becomes the cause of happiness for all the sentient beings—the numberless hell beings, hungry ghosts, animals, human beings, suras and asuras—and not only happiness but most importantly full enlightenment, the peerless happiness, which means to cause all sentient beings to be free from the oceans of samsaric sufferings.

This can be the motivation to generate before we recite mantras, such as OM MANI PADME HUM. So generate bodhicitta and then recite one mala of OM MANI PADME HUM, then, for example, each recitation of each mantra becomes the cause to achieve enlightenment for each sentient being and becomes the cause for numberless sentient beings to achieve enlightenment, Buddhahood, freedom from all the obscurations, gross and subtle, and completion of all the realizations, the peerless happiness. It is unbelievable, unbelievable, unbelievable! What is a more happy, joyful life than this?

So then by reciting OM MANI PADME HUM, each mantra becomes the cause to free the numberless sentient beings from each realm, from the oceans of samsaric sufferings.

From this you can understand when you read this practice [Method to Transform]. This is what I tell many students to do in the morning when they wake up, to think of this, then after this to think about the gradual Dharma motivation. There is the first verse that is praying to cherish every sentient being, every human being and so forth, to cherish them more than wish-granting jewels filling the whole sky. [See Method to Transform, p. 10.] Then with that mind to live the life serving others with our body, speech and mind.

Then there is the next verse from the Prayer in Seventy Stanzas by the hero Lobpön Pawo [Aryasura]. He was a famous Hindu pandit in the beginning, but then by going to Mount Kailash and seeing Mahasura and Vishnu washing the Buddha, he became a famous Buddhist pandit. So by praying for yourself to be like a wish-granting jewel or a wish-granting tree, so that whatever is wished for is granted immediately—to be like that for the numberless sentient beings.

The next part of the practice is elaborating on how to live the life for others, making the life most happy, most meaningful, most positive, a most wise life.

Then at the end there is blessing the speech, so that even gossip becomes like recitation of mantra. Then there is the mantra that increases your recitations of mantras millions of times, then blessing the mala and mantras for success, and some other powerful mantras are mentioned there.

Thank you very much. I hope you don’t mind I wrote quite a lot. Please write if you have time or if there is anything I should do.