A student had offered her house to Rinpoche, who responded with this advice about the unbelievable merit of making even a small material offering to the guru.

You have offered your house to me. I am not a realized being, but we have a Dharma connection, guru-disciple, so you receive the most unbelievable, most extensive merits. Even if you got one billion dollars every day by selling your house, it is still nothing.

Thank you a billion times. There will be always prayers to you. I know you have so much courage, a brave heart and dedication for our organization, the FPMT.

After meeting a student who asked about guru devotion, Rinpoche sent this letter advising the importance of checking the guru first, and what to do if the guru instructs the disciple to do something which is non-Dharma. 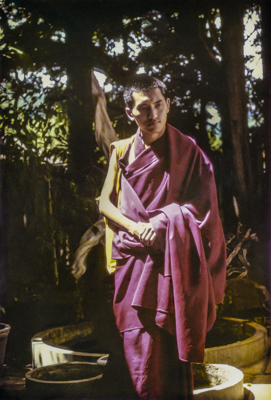 My dear one,
There is something I left out when I spoke to you, but you must know this. I spoke about the guru to you and what you need to know is, perfect gurus such as Tilopa, Marpa and so forth, and perfect disciples like Naropa and Milarepa, however many hardships those disciples have, they never arise heresy or anger [toward to guru] even for one second. They never lose faith that the guru is a buddha.

That is the perfect disciple, who can bear all the hardships, in that special case. Then whatever the guru tells them to do, they should do everything, like in the case of Tilopa and Marpa, who are buddhas. That is why enlightenment in this life, in a brief lifetime of degenerate time, is possible. It happened not only to them, but to many others.

For ordinary people, if the guru tells you to do something which is not Dharma, for example, asking you to kill somebody or anything like that, then it is said in Fifty Verses of Guru Devotion1 that you can ask permission to not do that action which is not Dharma.

You can do tangske, a sort of prostration, where you hold the upper robe and stroke it three times with your right hand, so it is like prostration, showing respect, then you ask permission to not do that action. It is said in another text, I think Vinaya, if the guru says to do non-Dharma things, to not do those actions.

What this means is that you can humbly, without losing faith that [the guru] is a buddha, with that faith, you humbly ask permission to not do that. You request to not do that action. That’s what it says. But do not think the guru doesn’t know Dharma, do not show arrogance, which creates so much negative karma.

Therefore, my emphasis is to check the guru from the very, very beginning. Don’t be like a dog that sees the food, the meat, thrown out, then immediate runs to it without checking. That’s why, in the beginning, checking the guru is the most important thing in your life, so your life is protected and you don’t get into trouble later

1 (Disciples) having great sense should obey the words of their guru joyfully and with enthusiasm.
If you lack the knowledge or ability (to do what he says), explain in (polite) words why you cannot (comply).
- Verse 24, Fifty Verses of Guru Devotion [Return to text]

A student wrote that they had a photo of another lama on their altar just because they liked the image, but had not taken teachings from him or accepted him as guru.

My most dear, most kind, most precious, wish-fulfilling one,
Thank you very much for your kind letter, I was very happy to receive it.

Regarding your question about that lama, if you haven’t taken him as guru to follow to enlightenment, then it’s OK. It really depends what you had in your mind at the time. Just because you like someone and put their photo on your altar, that person doesn’t become your guru. So you need to think more about how you were thinking at the time.

Many Western people—for instance, young girls—like some lamas, a little like a boyfriend, and they put their picture at the altar, but that person doesn’t become guru, just because of liking the image.

Thank you very much for helping the monk at the center. I was very happy to hear that.

What makes your life most meaningful is meditation on the lamrim, and to live your life with bodhicitta motivation. This is the best.

A student asked Rinpoche how to recognize whether their attachment to their guru, who was a lay person, was positive or was coming from a deluded mind. 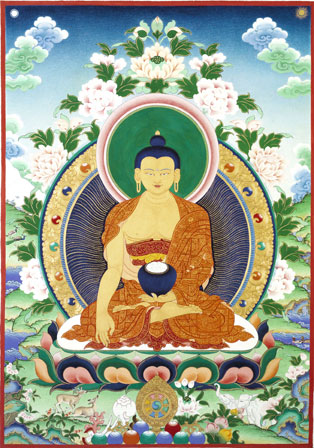 My dearest, most kind, most precious, wish-fulfilling one,
Thank you very much for your kind letter.

I will give you a simple example. Shakyamuni Buddha is sang gye in Tibetan. Sang means having totally eliminated the gross and subtle defilements—even the subtle negative imprints, and the dualistic mind and dualistic view—and because of that, gye, the total completion of realizations, with nothing more to generate.

Another way to present this is someone who has omniscient mind directly sees all the past, present and future, and is directly able to read numberless sentient beings’ minds in each of the six realms at the same time, never mixed up with each other. [A buddha] sees directly all the sufferings, all the delusions, as well as having all the different methods for different sentient beings, in order to gradually bring all sentient beings to buddhahood, including us—you and me—us.

Then having the power to reveal all the different methods to every sentient being including you; having perfect power to benefit others and also having infinite compassion for all sentient beings including you. Thinking that way, because of His Holiness the Dalai Lama, Kyabje Choden Rinpoche and all the other lamas who you have received initiations and teachings from, and because of the qualities of the Buddha, this manifestation happened to guide you.

You have to realize it’s exactly like this with all the other gurus that you have, even now with this one that you got the oral transmission from. Without thinking and without realizing that he is like the Buddha, with all the qualities, then you will have attachment, especially because he is young, so the ordinary mind arises. As he appears ordinary, then the ordinary mind arises and you get attached, especially as he is young. If you realize he is like the Buddha, if you look at him in the same way as the Buddha, if you realize that, then you will never arise attachment, only devotion. You will never get sexual feelings and only pure devotion will arise, for example, how you would feel if you are in front of the Buddha, you feel like that.

It is very important to follow and practice His Holiness the Fifth Dalai Lama’s instructions. Here is his very powerful advice:

In the view of your hallucinated mind, your own mistakes appear in the guru’s actions. This shows your heart is definitely rotten. Recognizing them as your own faults, abandon them as poison.

With devotion and respect, [reflect on] the pure appearance, seeing whatever actions are done by the guru as positive, and practice whatever the guru advises. The profound vital points, whatever is done, go into Dharma.

That should be understood as the root of happiness and benefits, and the completion of all your wishes. In your everyday life having awareness of this is the most important guru yoga practice.

Another quotation for you to understand is what the Buddha said in the Sutra of the Meeting of Father and Son:

The whole thing relates to the guru, to all your gurus, as well as this one that you have received an oral transmission from. So you have to meditate in that way, by relating like that.

You will learn a lot from these two quotations, if you think well and think always not only of your enlightenment but to liberate all sentient beings from the oceans of samsaric suffering and bring them to buddhahood. These quotes give you a lot to think about; there is so much to understand.

Please show these quotations, these teachings, to your friends or to those who have a similar problem, maybe not with the same guru as you, maybe with a different guru.

A student felt that his guru had given up on him. Rinpoche gave this advice.

My very dear one,
Please try not to worry, the sadness will pass.

It is not possible for  the teacher to give up, it would be losing the wishing vote of bodhicitta.

With love and prayer...

Request to be Guru and Life Practices
March 2015
December 2015

A student wrote asking Rinpoche to be her guru, and for life practices.

My most dear one,
I have no qualifications as guru, the qualities one should have, so I’m sorry. But you try your best and I will try. You pray and I will pray, and I will give what help I can.

Begin your day with bodhicitta to make the life most meaningful and beneficial for sentient beings, thus transforming your life from iron into gold, not only with Dharma but with bodhicitta motivation.

Lama Tsongkhapa’s Middling Lam-rim is the main lam-rim text you need to study. Read it twice from beginning to end.

Do effortful meditation, following the lam-rim outline. Repeat this seven times, then do effortless meditation.

To help with that, to achieve the realization of the path to enlightenment, to free the numberless sentient beings from oceans of samsaric suffering and bring to full enlightenment, do the following:

The Heart of the Path