Rinpoche gave the following practices and advice for protection from fires. This advice is also for tornadoes, floods, hurricanes, and any dangers from water, air, earth and fire. The advice is available for download as a PDF file from FPMT. 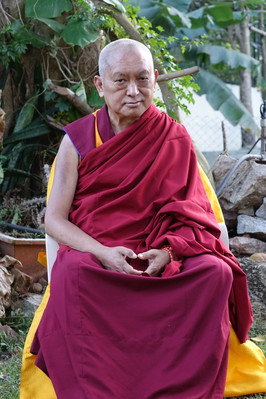 Medicine Buddha practice can also be done for anyone who is sick, dying, or even someone who has already died. This is the best practice to do.

Recite each of the seven Medicine Buddhas’ names seven times and chant the mantra. Reciting each of the names seven times fulfills all your wishes, including liberation from samsara, to be free forever from all sufferings and their causes, up to full enlightenment. This includes all success in this life. This comes about even if you don’t pray for it; you still get the results.

This practice is wish-fulfilling, for all your happiness, temporary and ultimate—this life’s happiness, future lives’ happiness, and ultimate happiness: liberation from samsara and full enlightenment.

Also, this practice fulfills all the wishes of all sentient beings, who are numberless. This means every single insect, all the ants, bugs, termites, ticks, even the ones you can only see through a microscope. It also includes all the elephants, zebras, lions, every single bird, all the worms, every single cat, dog, mouse, all the cockroaches, horses, monkeys, kangaroos, squirrels and flies as well as every single human being, and also all the beings in the numberless universes, as well as all the suras, asuras, hell beings, hungry ghosts, and intermediate state beings.

With Medicine Buddha mantra you can liberate numberless sentient beings from the oceans of suffering and bring them to enlightenment. So, you can see how this practice is much more precious than the sky filled with gold, diamonds, wish-fulfilling jewels, and zillions and zillions of dollars.

You can also make strong prayers for anyone who is dying, sick, or has already died. Make prayers for the sick to recover. If they are dying, then pray for them to die with a virtuous, happy mind, with compassion and loving kindness for all beings, as well as devotion to Buddha, Dharma, and Sangha. Also pray for them to be born in a pure land and become enlightened, or to receive a perfect human body, meet a perfectly qualified Mahayana guru, receive teachings, and achieve enlightenment in that life.

Totally rely on Medicine Buddha, with complete faith, to extinguish the fires.

Visualize Medicine Buddha in the sky and nectar coming from Medicine Budha, like water flowing. Think it completely covers all the fires with a very wide flow of nectar, even bigger than Niagara Falls. Think that the nectar is extinguishing all the fires. This is what you visualize as you chant Medicine Buddha mantra.

At the end, make prayers that all sentient beings can generate all the realizations, the root: guru devotion, the three principal paths, renunciation, bodhicitta, and emptiness, as well as the two stages. Then make prayers to generate loving kindness and compassion in everyone’s hearts and to purify all the negative karma, which is the ultimate cause of the fires.

There is a White Umbrella protection, prayer and mantra which can be put around your house, inside and outside, to protect it from fire. It can also be printed on flags that fly over the house. This is very powerful to protect from the four elements and other dangers from living beings, including lawsuits, etc.

You can also put the White Umbrella deity’s picture around the house. Then you should visualize that rainfalls of nectar are emitted. This nectar stops the fires, purifies the suffering of the insects, and purifies the negative karma of all sentient beings. All are liberated.

3. The Heart Mantra of Arya Vairochana

Put the Heart Mantra of Arya Vairochana around the house/buildings to protect from fire danger.

Recite the Ksitigarbha mantra and do the practice as much as possible.

You can also do Chenrezig practice. Completely rely on Chenrezig, make prayers, and visualize Chenrezig in the sky with nectar flowing out, purifying all the causes of the fire. The main cause is negative karma.

Visualize the Lama Chöpa merit field with a great stream of nectar coming from the merit field and putting out the fires and especially helping the insects and animas who are suffering and perishing in the fire. This is best done in the context of doing the whole Lama Chöpa (if you have time). Showers of nectar pour down purifying the negative karma of the suffering sentient beings who are suffering from the fire and who have been destroyed in the fire, and also of all the suffering sentient beings in the six realms. Also visualize that the nectar as it pours down is changing the karma and the minds of the nagas, dergye (harmful spirits) and landlord beings, changing their negative mind so that they do not harm anymore. It’s very important to have one-pointed refuge in the merit field while doing this practice, and to recite the migtsema mantras while doing this visualization.

Doing protector prayers is very good, especially tea offering to dergye as they control the elements, so it is important to appease them. But you can’t just offer tea and do nothing with the mind; you have to generate great bliss and emptiness.

This advice is also for tornadoes, floods, hurricanes, and any of those dangers from water, air, earth, and fire. When doing these practices it is important to do so with good concentration and motivation of bodhicitta.

If the person who does the prayers has realizations

Any prayer made by a being with higher realizations, such as a bodhisattva, can also extinguish fires. This includes yogis and tantric practitioners who have achieved the clear light, illusory body. They can extinguish the fire with their practice, just as Lama Tsongkhapa extinguished a fire at Ganden with his mind.

When someone with any of these realizations prays, then the devas, nagas, and all the other beings, including the eight groups of worldly beings (who are very connected with the weather and the elements and who cause the elements to be destructive), will listen more and obey these practitioners. Even if the practitioner does not have the other realizations mentioned, but at least lives in morality, then these beings will obey this person, and the harm and destruction from the elements can be stopped.

There is one story of Lama Kälsang Jamyang Mönlam, who had bodhicitta realizations. When Tashi Lhunpo monastery was in danger of being flooded, he wrote on a stone, “If it is true that I have bodhicitta, then the water should turn back.” After writing this on the stone, the river actually turned and went backwards.

There are many stories of the power of bodhicitta, how it can control and affect the elements. There are even examples in Christianity, as well as many examples in Buddhism.

St. Francis is exactly like the Kadampa geshes, even in his external appearance, even though he was from another tradition. His mind was totally pure; there was no stain of the eight worldly concerns, and he was a totally renounced, pure, spiritual person. Like the Kadampa geshes, St. Francis also asked his disciples to criticize him. He preferred to be criticized rather than praised. You can even feel his gentleness from his statues and from his face, which is a sign of having bodhicitta and having a totally tame, subdued mind. He seems so peaceful and humble and very wonderful to look at, very inspirational. All the birds loved him and always stayed around him and on his body. This is also a sign that he was a great holy being, a saint having bodhicitta.

Rinpoche checked what could be done to dispel serious bushfires that occurred in Sydney and the Blue Mountains, Australia, in September 2013.

This is what came out very good to do:

1.   Recite the mantra of Arya Vairochana. This came out best.

Visualize the Lama Chöpa merit field, with nectar coming from the merit field like a waterfall. From every merit field visualize huge waterfalls. Nectar falls and stops all the fires and purifies all the sentient beings who are there, as well as all the six-realm sentient beings and yourself. This also purifies the karma to experience the fires. If the karma is not purified, then this won’t be the last time; it will happen again and again. Then recite the Vairochana mantra.

2.   Alternatively you can visualize the Buddha or the refuge merit field and do the same visualization as above, then recite the White Umbrella mantra [Tib: dü-kar; Skt: Arya Sitatapatra.]

Rinpoche made the following suggestions for helping with the bush fires that were burning out of control in Australia.

While the bush fires are still burning, the Australian Dharma centers should perform a total of 11 Medicine Buddha pujas. If these pujas are done with strong prayers to Medicine Buddha, to stop the winds and to bring rain, this can definitely help the situation, especially if the geshes at the centers also attend the pujas. In my observations, Medicine Buddha puja came out as very beneficial.