Overcome with Fear of Death
October 2005

A student's car had broken down on a busy highway in California. She sat stalled in the fast lane as cars speeded past her. Overwhelmed by fear of death, she managed to recite aloud the six-session guru yoga and Tara’s mantra, and held a protection packet in her hand. She prayed to be saved as the fear of death arose. She wrote a letter asking what practices she could do.

Concerning your fear of death, the following will help immediately. As a basis, do self-initiation four, three, or two times, or at least once a month. For immediate protection, self-initiation is best. Doing a short one every day is the best. This purifies broken vows, reviving them and making them pure again. This not only saves you from the lower realms, which have unbearable suffering, but also from suffering there for long periods of time, for eons. The main thing is that it is beneficial to do self-initiation. It helps you achieve realizations, as it is an extremely powerful method of purification. Other practices help, but self-initiation is an emergency protection. It helps with the fear of death.

Having strong compassion toward others is another important thing. Then, there is also following the guru’s advice in thought and action, which is guru devotion.

Prepare the mind every day. Practice the five powers*, so that you can apply them at the time of death. If you can practice these, you don’t need to practice po-wa and so forth, since the practice of the five powers becomes po-wa. Even if you practice po-wa, what makes it successful is the basis of having practiced the five powers as you near the time of death and also integrating them into daily life. Dying with bodhicitta is the best way to die, as you have heard many times. This is immediate protection. Learn these things and put them into practice.

*The five powers are the power of the white seed, familiarity, determination, repudiation, and prayer. For more detail, see Pabongka Rinpoche’s Liberation in the Palm of Your Hand.

[See more related advices from Rinpoche—particularly on the five powers—in Preparing Oneself for Death, in the Death and Transitions topic of the Online Advice Book.]

A student from Hong Kong had been very ill with kidney problems. She often found herself frightened at night-time and unable to sleep. She had dreamt three times that she had been fired from her job, that she was vomiting, and that there were feces on the floor. She was afraid there was something very wrong and thought perhaps she should quit her job. She wrote Rinpoche seeking counsel.

It is good to continue to work in your office. Vomiting and defecating is a positive dream. Don’t worry.

Above your head, in your bedroom, you should keep His Holiness the Dalai Lama’s portrait, a picture of Thousand-arm Chenrezig, and my portrait. Believe that all the buddhas and the bodhisattvas are there and are protecting you.

Recite the mantra of Tathagatha Victorious One Holder of the Earth:

Recite this at least seven times a day, more is better. Do this to fulfill all your wishes and all your prayers—positive wishes that don’t harm others.

You should practice White Umbrella deity mantra by completely taking refuge in the White Umbrella deity. You can discuss this with the spiritual program coordinator at your Dharma center. The mantra can be in the text, or in the center of a protection mandala. Recite it until you feel OK. It would be very good if you could do this every day. Also, have a picture of White Umbrella deity in your room to help with your health problems and also for this present situation.

For your health problem, you should take some erma. Erma is a delicious spice from Nepal. In my observations it came out very good for your health.

May your life be most meaningful with bodhicitta, to benefit others through the day and night.

A student was afraid of flying. Rinpoche gave the following advice.

Just before departure and during the flight, it is very good to recite the names of the ten directions' buddhas. If you keep on reciting the names, in whichever direction you are flying, if you recite that Buddha’s names and pay one-pointed attention to this, not only will you be free from danger, but your wishes will be fulfilled. So not only is this for safe travel, but for the successful fulfillment of whatever goals you had for going in that direction.

It is very good to pray not just for your own safety, but on behalf of all the people in the airplane—all 300 passengers and crew, or however many people there are—for them all to have a safe journey. Not only that, but you can pray that whoever this airplane carries may always be safe. It’s very good to pray like that.

A German woman had had a fear of snakes since she was a child. At the age of nine, she saw a smashed snake in her parents’ garden, and a woman in Germany, who was clairvoyant but not Buddhist, told her that in a former life she had destroyed people. 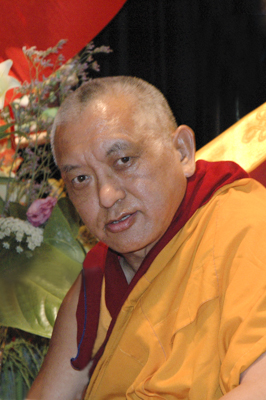 You do not need clairvoyance. This is explained by karma. In a past life, after dying because of a snake killing you or dying out of fear of snakes, this often goes into the next life.

Some beings are born in a shape that gives fear to others. It is just like that. Often it is a result of anger. One did some unpleasant things to others, and now one fears the result.

Even I would run away when I see a snake. That is normal.

Think of the suffering of the snake: It has no chance. If it had a choice, it would take another form. The snake itself has a fear of eagles. Use the snake to generate compassion and to develop bodhicitta. If you had the opportunity, you would also choose another body, not a body that nobody likes. Snakes are very afraid, they hide themselves and disappear as soon as someone comes close.