Rinpoche sent this letter to a person who was helping many others in Ladakh. Rinpoche offered thanks and explained the current and future projects he is supporting in Ladakh. 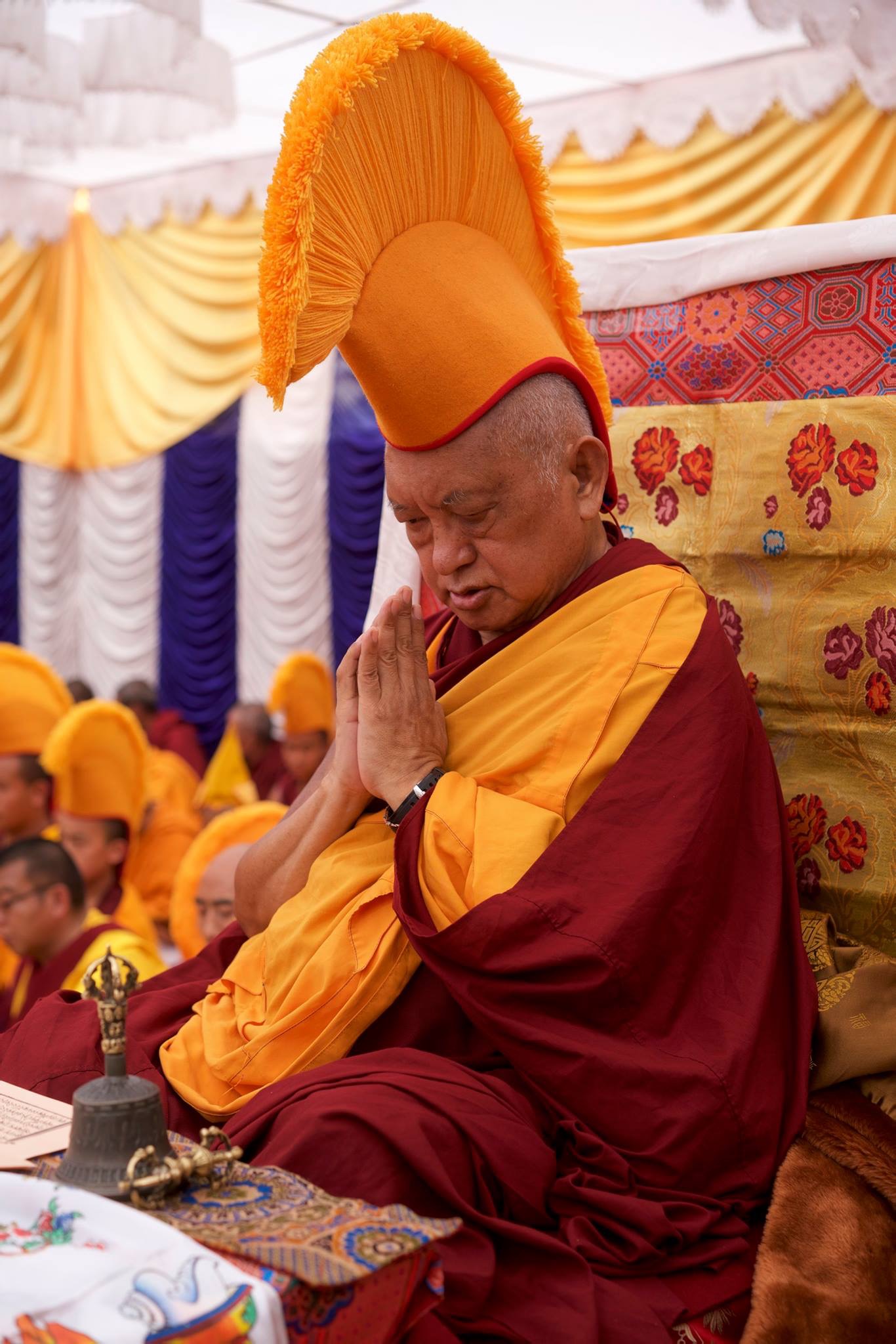 My most dear, most kind, most precious, wish-fulfilling jewel one,
I hope you are indeed in good health. This is my first time to use this word. I never use it, so I’m not very sure, I repeat what people use, but I don’t know exactly. Even His Holiness uses it.

I was introduced to you by one student at Boudha Stupa; you might know it if you came to Nepal before. We met to have lunch, to go around the stupa and to make offerings to the holy stupa, which is incredible, most incredible. The Boudha Stupa is such a precious stupa, thousands of years old. So the student showed me your picture on her iPad. That was the same as meeting you directly and I was extremely happy that she had introduced me.

She told me that you liked my books and that you have a very beneficial and much-needed program in Ladakh giving treatment for the eyes for the last seven years. That’s really, really good what you’re doing, things that people need. It’s most needed and fantastic giving to the people and the kids, to save their eyes and to not destroy their eyes from a young age.

There’s one famous eye doctor here, Dr. Ruit, who worked with a very famous eye doctor in Africa who went to the villages to treat people’s eyes voluntarily, but he died, he was poisoned or something. Anyway, he died, something like that. Dr. Ruit worked with that [opthalmologist] and has worked a lot in Nepal. When we were building a hospital for eyes in Tibet, he was involved in that many years ago.1

So Dr. Ruit sometimes goes to the mountains, to the very faraway villages, to treat the eyes. He goes to these places in Nepal with nurses. In Nepal, Dr. Ruit is the best, and he treats people with cataracts within five minutes. I went to his hospital where he does eyes and anything like that, and the people really need it. So it’s really, really good to help the sentient beings, the most needed ones.

There are many poor people there, so I thought to open a home for the destitute, but I heard from the people that they cannot stay there all the time; they have to be at their own home because they have the responsibility to take care of their children. In Ladakh that’s so important, and if they stay away from their children, it’s regarded as a big disgrace for the parents. They have to go back, so it’s like that.

My main reason for building this place is that it’s not just to build a house and to give them food, not that, like taking care of animals. Also, it’s not the same. As His Holiness often says, of course, if you’re human you can communicate and you can explain things to others. But you can’t explain Dharma to animals—you can’t explain karma, what is the cause of suffering, nonvirtue, and what is the cause of happiness, virtue. You can’t really explain that to cats and dogs, but you can make people understand. Of course, it depends on whether they have merit to understand or not, and it also depends on whether you have a skillful way of explaining, of course, and you need a karmic connection with them.

My main reason to explain to those elderly laypeople—to explain how to live the life and how to think of the life according to Dharma, to study the simple things—the idea is to become a good human being. They are Buddhists, so of course [they want] to become the best human beings on the basis of living life having taken refuge in Buddha, Dharma, and Sangha, the Three Rare Sublime Ones.

There’s so much to explain, to realize that [the Three Rare Sublime Ones] are so precious, and how we need their guidance and help in this life and in all our lives. Yes, not to be reborn in the lower realms, but to receive a human rebirth, and to be free from suffering and achieve ultimate liberation from samsara. Then to be free from the lower realms and to achieve the great nirvana, enlightenment, the total cessation of not only gross but also the subtle obscurations and the completion of realizations. So not only to have a meaningful, happy life, but when they die, to not be reborn in the lower realms. So first to [attain] liberation from samsara, from the sufferings, then ultimately [to attain] enlightenment, buddhahood.

Meanwhile, I also had an idea to start an animal sanctuary in Ladakh. One family bought old cows, so normally they sell them to the butchers, they kill them for meat. One family kept about fifty cows and they thought that other people would help care for them, but nobody came to help.

So even though I couldn’t go to Ladakh now, I tried to help them to make a better place for the animals, and to build eight stupas for the cows to go around in the morning and evening at least three times.2 So then this frees them from samsara quickly and allows them to achieve enlightenment.

Even if the animals don’t know this is a stupa they’re going around—representing the Buddha’s holy mind, the most precious thing—even if they don’t know that, by the power of the holy object, the stupa, they collect merit when they go around it. They create the cause of enlightenment, so that makes them become free from samsara and achieve enlightenment, the total cessation of obscurations and the completion of realizations.

It’s the same thing, not only with stupas, but also with statues and scriptures, the Buddha’s teachings. For us human beings, even if we don’t have faith, but are just like animals and we go around [holy objects], just imitating what others do, going around doing prostrations or making offerings, like the parents do, then by the power of the holy object we create the causes of enlightenment, even though the mind, the motivation is not Dharma, not holy Dharma, but nonvirtue, just attachment or even anger, whatever it is, but not holy Dharma.

Usually for our actions of body, speech and mind to become virtue, to become the cause of happiness, first we need the motivation for the act to be virtuous, holy Dharma. Otherwise our actions cannot become Dharma, and they become nonvirtue, because the motivation is nonvirtue, attachment to this life—that’s probably the most [common] motivation. And then the other thing is the self-cherishing thought, or sometimes it can be anger or ignorance. If our actions are motivated by that, then the actions become the cause of suffering, even rebirth in the lower realms—the hell realms, the hungry ghost or the animal realms.

Due to another karma if we are born human in the future, still we experience the suffering of those negative karmas, those possible negative karmas, so the ripened aspect result is rebirth in the lower realms. But there are three other sufferings in the human realm: the possessed result of killing is being born in a place where there is a lot of war, where there is always fighting, killing, contagious diseases, so many things. You see even, for example, I have diabetes, so people with diabetes have a side effect from sugar and certain other foods, like that. So from the text it seems that those [things] are the result of killing, the negative karma of killing, the possessed result.

Then experiencing the result similar to the cause, how when we harm others, those sentient beings whom we harmed in the past, they harm us in this life and in our future lives, so we suffer. And also there’s the habit of past negative karma, the habituation, so again we create the same negative karma of killing, and so forth, again [creating the result similar to the cause] even when we’re born as a human being due to another good karma.

There is a monastery in Ladakh, and I’ve been helping the school there for many years. There are some monks there, so I asked the elder monk to help to build the stupas and create better conditions for the animals.

Here in Nepal, we have an animal sanctuary near Kopan Monastery, but it is completely full. Recently certain monks and teachers got the COVID-19 virus, so I liberated some goats, and now it’s completely full. It’s difficult, because we don’t have a place [for more animals].

So I thought of a place to liberate more animals there [in Ladakh]. That has happened now, but for a destitute home, I think maybe I should be there, so then people know what to do.

The other big project that I have for Ladakh is something that I have promised for Lotsawa Rinchen Zangpo, the great, great, great holy being who translated tantra from Sanskrit—it’s called “New Tantra” but it’s not that he started it; it came from the Buddha, who taught it.

So he was from Ladakh, I don’t know how many hundreds of years ago, and he built 108 stupas. The ex-abbot of His Holiness’s monastery, Namgyal Monastery, said he went many times to Ladakh and he thinks there are many more than that, but it seems that somehow, they are very small.

They were looking for sponsors, so I promised to build 108 stupas in Ladakh, to rebuild Lotsawa Rinchen Zangpo’s stupas. So the small ones I plan to make bigger. Sometimes due to the location, the place, I think maybe we can build bigger stupas, but they are mostly smaller. I think somehow then we can make a practice for the people to go around those 108 stupas, and if they practice and complete that, then numberless negative karmas from beginningless rebirths get purified. So that cause makes it easy to achieve realizations, easy to become free from samsara and easy to achieve enlightenment for sentient beings.

I think I’m even going to tell the monks that they can start, those who I’ve been helping for many years, perhaps you might have met them.

So this is a little bit of information about what I’m going to do in Ladakh. I was very impressed that you said that you would help. That’s an excellent quality for a human being, wishing to help. I wish that everybody in the world would do that, then there would be no war, there would be harmony and peace, so much happiness, and not even a religious war.

This is just some information about my involvement in projects in Ladakh, just to let you know.

Yes, in the future, I hope you can come to Nepal to see Kopan Monastery and even my birthplace in the Solu Khumbu area, near Mount Everest. If you can see that, it’s very good, and you can come there maybe for some weeks, or some days and you can do some meditation retreat there, and also walk around in the mountains.

Thank you very, very much for all your qualities, which I highly admire. I hope that everyone in the world can become like you. Thank you very much, a billion, zillion thanks for your good heart and your positive life, bringing so much benefit to others and to the world.

1 Read about the Amdo Eye Hospital in Tibet in this FPMT post. [Return to text]

2 The eight stupas for the animals in Ladakh are now completed. Read more in this FPMT post.  [Return to text]