Blessings of the Relics

Blessings of the Relics

Rinpoche gave this advice on how to think about the Heruka relic from Mount Kailash. This relic is often used to give blessings when someone is about to die.

The person who takes the relic can think it is Heruka’s holy mind dharmakaya, and their own mind becomes oneness with Heruka’s holy mind. They should think that strongly and keep the mind in that as much as possible.

If it is difficult to think of Heruka, then think the relic is the guru-buddha’s holy mind dharmakaya, the same.

Think all one's defilements and negative karma are purified.

One’s own mind becomes oneness with the guru-buddha’s holy mind, totally. Totally stay in that and remember it again and again.

In this advice, Rinpoche discusses the relics of holy beings and advises that seeing the relics emit light depends on people’s karma and merit. 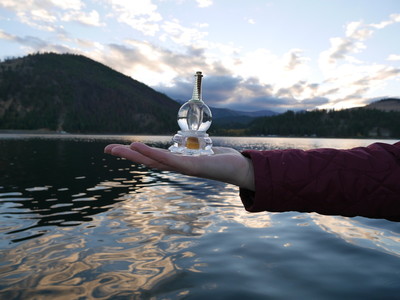 When I was in Tibet [in 1987] I received one of those nine relics. It was quite big. Another group had that Lama Tsongkhapa relic and in Taiwan recently light came from the relic. Light shone from that relic.

It seems it affected the relics of the other Kadampa geshes, Lama Atisha and his disciples, then another one and another one, and then the last one, Geshe Lama Konchog’s relic, which was also glowing. That happened and then after one hour the light stopped.

The relics went to Korea and again light came from those relics, in the same way. The light started coming from Lama Tsongkhapa's relic through to the last one, Geshe Lama Khonchog’s relic. So many people came to do prostrations there.

Rinpoche: I think recently, some time ago, there was one relic where that happened. A Buddha’s relic manifested out and many relics were produced. That happened. So, light came from the relic, just like this time when it happened [in Taiwan and Korea]. I think for the people at that time, those people coming to see this have good karma; they have especially good karma.

Student: They have the karma to see that and to have that experience?

Rinpoche: Yes, yes, yes. This is special and it happened due to their merit. I remember in San Francisco I met a woman at a restaurant and the owner of that restaurant, one Chinese man, said he had become a Buddhist. He went to some place, some temple somewhere, and he saw light coming out of a relic but only he saw it. He said that from that day on he became a Buddhist. So, it seems to be people’s karma. He had the merit to see that. So it’s like that. That’s unbelievable, that it happened. It helps.

I think it’s a spiritual education for many people who don’t know Dharma, to enlighten their mind—to enlighten, to dispel darkness, to enlighten the mind. Like that, to bring enlightenment. It causes, it starts to [bring] omniscience to their mind. From this they can find faith and gradually they are able to develop their mind, to develop wisdom, Dharma wisdom, and compassion. They can develop these things for all living beings and from that they are able to achieve liberation from the oceans of samsaric suffering and achieve full enlightenment, by ceasing even the subtle defilements.

1 Read more about the original tooth relic and see an image of the relic pill offered to Lama Zopa Rinpoche when he was in Tibet in this Mandala magazine article, Feb–Mar 2007. [Return to text]

Thanks For Hosting Relics
January 2012
August 2017

Rinpoche sent this letter to a center in Brazil that had hosted the Maitreya Relic Tour.

To my dear ones,
Thank you very much for your kind letter. I am very happy that you were able to see the Buddha’s relics and the great yogis’ relics, and that the relics came to bless Brazil, the area and the country. Thank you very much from the bottom of my heart.

Thank you for your Dharma practice, for your good heart [wishing] to benefit sentient beings, to liberate them from the oceans of samsaric sufferings and to cause ultimate happiness. Besides the happiness of future lives, also the happiness of this life and especially full enlightenment. This comes from your practice, Dharma, meditation, learning Buddhism, in order to bring sentient beings to enlightenment, so that’s great! Thank you very much.

Please continue to learn Dharma and do whatever is needed, and with that bring all sentient beings to enlightenment.

I hope Buddhism will develop and spread through your efforts learning, practicing and having realizations with your well-subdued mind—of renunciation, compassion, loving kindness, bodhicitta, right view and the root of the path, guru devotion, then also tantra realizations—in order to benefit many sentient beings.

Blessings from the Relics on Tour
September 2009

Some relics started to radiate light during a tour. Rinpoche gave the following message to the people working on the tour.

Light beams emitting from the holy relics means the enlightened beings are communicating to those of us who are able to see the light.

It will be very powerful if you fortunate ones coming to receive blessings from the relics make strong requests to actualize the complete path to enlightenment, especially loving kindness, compassion, bodhicitta, and clear light from the highest tantra, secret Vajrayana, and the resultant two kayas, in this very lifetime, without delaying for a second.

Dedication: "May I liberate numberless suffering beings from the oceans of samsaric sufferings and the causes of suffering – delusion and karma – and enlighten them as quickly as possible." You can also pray to generate loving kindness, compassion, and bodhicitta in the hearts of all the leaders of the world, and in the hearts of all religious people – not only Buddhists – and then in the hearts of the rest of all the numberless beings. "May they have perfect peace and happiness in this world – no war, famine, diseases, fighting, quarrels, poverty, all of these external living conditions. May they avoid the inner suffering of being without Dharma in their hearts. May they complete the path that ceases all suffering and its causes – delusion and karma – the complete path to enlightenment, which ceases the subtle negative imprints, which are obscuring us and causing us to hallucinate."

Thank you. What amazing good luck you have.

Rinpoche made the following comments on relics.

The relics play a very important role in world peace. I met the President of Kalmykia (in Russia) and he really wants the relics to come to Kalmykia.

There is not one single action that the Buddha did that is without benefit. Every action is to benefit sentient beings. When sentient beings see Buddha’s relics, they purify 100,000 eons of negative karma. When people offer service to Buddha’s relics, then in future lives they will be free from the eight things (such as no opportunity to practice Dharma), they will always have a perfect human rebirth, always be able to practice Dharma, to meet a virtuous friend, and buddhas and bodhisattvas will help them. There are many important benefits.

The FPMT is very fortunate to have these relics in the organization to be able to bring benefit in this way.

Rinpoche made the following comments about the relic tour.