Many students have asked Rinpoche for advice on how to do the preliminary practice of refuge. 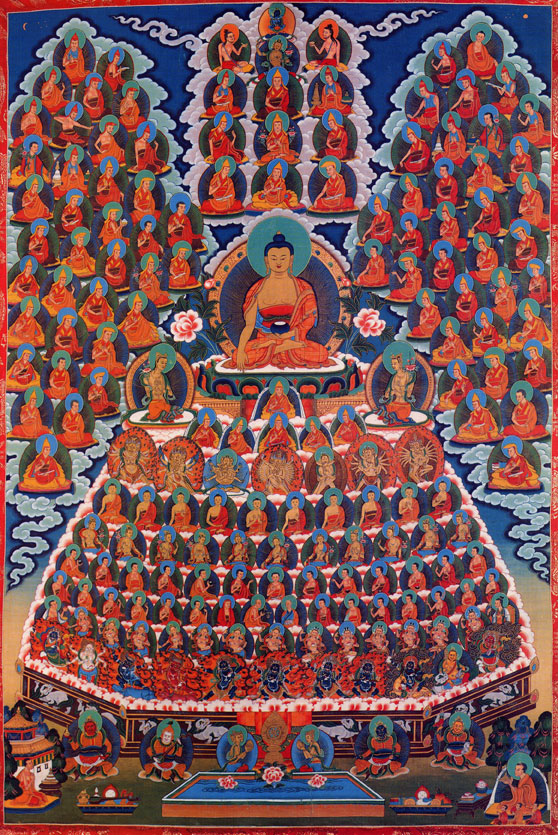 As you are reciting the refuge mantra, the most important thing is to remember the negative karma that is purified and the qualities that are received. In the beginning of your recitation concentrate mainly on purification; near the end meditate that other sentient beings are also being purified.

At the end of the session, feel that you and all other sentient beings have entered completely under the guidance of Guru, Buddha, Dharma, and Sangha.

As you are reciting and visualizing the nectar, meditate that you are purifying negative karma committed toward the guru:

As you receive the blessing qualities of the gurus' holy body, speech, and mind by reciting the mantra and doing the visualization, the most important, the key thing is to do this visualization without ordinary thought, without the ordinary view of the person of the guru. Thus, as you are reciting the prayer of going for refuge to the guru, the most important thing is to do this with guru devotion: that is, seeing the guru as Buddha, actually seeing Buddha. Then the blessings can be received.

There is an example from the texts: "At the beginning Guru Shakyamuni Buddha made so many prayers for sentient beings who are in the one-hundred-year-lifespan age of quarreling (the Kaliyuga), sentient beings who are left out because of being so difficult and unable to be subdued by other buddhas. And because Guru Shakyamuni Buddha felt this to be so unbearable, he made prayers to help these sentient beings. Now this is our time; therefore, if one analyzes who is that Buddha, one can find no other than the virtuous friends who give us advice, teachings, oral transmissions, initiations, and the three vows, those who are doing the actions of teaching to enlighten. The Buddha who is working through the virtuous friend, manifesting as the virtuous friend."

Again, from the refuge field, nectar is emitted from the 1000 Buddhas of the Fortunate Eon, the 35 Buddhas of purification, the Medicine Buddhas, and all the deities of the four classes of tantra: kriya, charya, yoga, and maha-anuttara yoga.

As you recite the mantra and perform the visualization of nectar, meditate that you are purifying the negative karma committed toward the Buddha:

Then, meditate that you receive all the infinite qualities of Buddha's holy body, speech, and mind.

For example, from the scriptures: "If someone picks up a small plant, cuts it into pieces, mixes it with many other tiny pieces of other plants, and puts them all in the ocean for many years, and then these many tiny pieces are shown to the Buddha, the Buddha is able to explain from which plant each piece comes, from which place, and so forth. The Buddha can explain everything about each tiny piece of plant."

For example: "If there were a person on Buddha's right offering perfume to his holy body and a person on his left cutting his body with an ax, Buddha's compassion and loving kindness would be exactly the same toward both people."

Other qualities possessed by the Buddha are the ten powers, the four fearlessnesses, and the twenty-one uncontaminated transcendental wisdoms.

In the refuge field, the Dharma refuge is visualized as many Dharma texts in front on the right. Think that all realizations appear as those texts, their words written in silver on gold paper. From the letters of every text, nectar flows and drips, purifying your negative karma and bestowing the blessings of the qualities of the Dharma.

Think about all the qualities, all the realizations from guru devotion up to enlightenment.

Then there is the realization of the two stages of tantra, the generation stage and the completion stage. The generation stage prepares the mind to achieve the three kayas (enlightened bodies), to be able to purify ordinary death, rebirth, and intermediate stage and thus achieve the path-time three kayas-the path-time dharmakaya (truth body), sambhogakaya (complete enjoyment body), and nirmanakaya (emanation body).

Then there is the realization of the completion stage of tantra, which actually cuts ordinary rebirth, death, and intermediate stage and becomes the direct cause of the dharmakaya (wisdom truth body) and the rupakaya (form body). Then there are many extensive meditations on the five paths and the ten bhumis (bodhisattva grounds). These are the inconceivable qualities of the Dharma.

From each of the bodhisattvas, arhats (not ordinary manifestations), dakas, dakinis, and protectors visualized in the refuge field, nectar is emitted, purifying and bestowing blessings and realizations.

When you meditate on seeing the four qualities in your own mind and receiving all power from the protectors, it is like having a puja done to purify your obstacles and sickness. This is not only true of this last visualization; it is true of the entire refuge practice. If you do the entire refuge practice well, you are purifying negative karma and receiving blessings for complete success.

What is to be avoided

What is to be practiced

In general, there are four points to the practice of Dharma. One should rely upon holy beings, listen to the holy Dharma an after correctly comprehending, follow the Dharma and practice it. One should not let one's senses become excited (i.e. control the senses when in danger of creating negative karma) and take as many vows as one is capable of keeping. Have a compassionate attitude towards sentient beings. Whenever you eat or drink make effort to offer to the rare Sublime Ones (Triple Gem), and train well in the refuge precepts, including exerting oneself to make offerings to the Triple Gem.