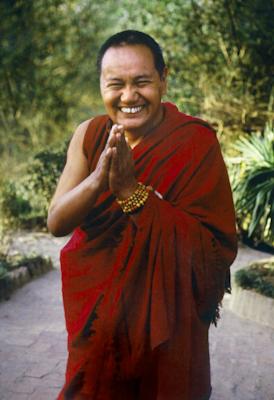 Big Love: The Life and Teachings of Lama Yeshe, the official, authorized biography of Lama Yeshe, was published in 2020 by Lama Yeshe Wisdom Archive. Watch this short video,The Big Love of Lama Yeshe for an overview of this historic publication.

Read Wisdom magazine No. 2, a commemorative issue published in 1984, featuring thirty pages of tributes, teachings, poems and photographs in honor of Lama's life and work. You can also read the tributes featured in this magazine on our website.

View a photo montage on YouTube of Lama Yeshe and Lama Zopa Rinpoche prepared by David Zinn for the 2009 Parliament of World Religions.

Lama Thubten Yeshe was born in Tibet in 1935. At the age of six, he entered the great Sera Monastic University, Lhasa, where he studied until 1959, when the Chinese invasion of Tibet forced him into exile in India. Lama Yeshe continued to study and meditate in India until 1967, when, with his chief disciple, Lama Thubten Zopa Rinpoche, he went to Nepal. Two years later he established Kopan Monastery, near Kathmandu, in order to teach Buddhism to Westerners.

In 1974, the Lamas began making annual teaching tours to the West, and as a result of these travels a worldwide network of Buddhist teaching and meditation centers—the Foundation for the Preservation of the Mahayana Tradition (FPMT)—began to develop.

In 1984, after an intense decade of imparting a wide variety of incredible teachings and establishing one FPMT activity after another, at the age of forty-nine, Lama Yeshe passed away. He was reborn as Ösel Hita Torres in Spain in 1985 and recognized as the incarnation of Lama Yeshe by His Holiness the Dalai Lama in 1986. For more information about Tenzin Osel Hita see the FPMT website.

Thousands of pages of Lama's teachings have been made available as transcripts, books and audio by the Lama Yeshe Wisdom Archive, and most are freely available through the Archive's website. Other teachings have been published by Wisdom Books, including Wisdom Energy; Introduction to Tantra; Becoming Vajrasattva and more, available at www.wisdompubs.org.

The Archive has also released a number of DVDs of Lama Yeshe.

Lama Thubten Yeshe was born in Tibet in 1935 not far from Lhasa in the town of Tölung Dechen. Two hours away by horse was the Chi-me Lung Gompa, home for about 100 nuns of the Gelug tradition. It had been a few years since their learned abbess and guru had passed away when Nenung Pawo Rinpoche, a Kagyü lama widely famed for his psychic powers, came by their convent. They approached him and asked, "Where is our guru now?" He answered that in a nearby village there was a boy born at such and such a time, and if they investigated they would discover that he was their incarnated abbess. Following his advice they found the young Lama Yeshe to whom they brought many offerings and gave the name Thondrub Dorje.

Afterwards the nuns would often take the young boy back to their convent to attend the various ceremonies and other religious functions held there. During these visits—which would sometimes last for days at a time—he often stayed in their shrine room and attended services with them. The nuns would also frequently visit him at his parents' home where he was taught the alphabet, grammar and reading by his uncle, Ngawang Norbu, a student geshe from Sera Monastery.

Even though the young boy loved his parents very much, he felt that their existence was full of suffering and did not want to live as they did. From a very early age he expressed the desire to lead a religious life. Whenever a monk would visit their home, he would beg to leave with him and join a monastery. Finally, when he was six years old, he received his parents' permission to join Sera Je, a college at one of the three great Gelug monastic centers located in the vicinity of Lhasa. He was taken there by his uncle, who promised the young boy's mother that he would take good care of him. The nuns offered him robes and the other necessities of life he required at Sera, while the uncle supervised him strictly and made him study very hard.

He stayed at Sera until he was twenty-five years old. There he received spiritual instruction based on the educational traditions brought from India to Tibet over a thousand years ago. From Kyabje Trijang Rinpoche, the Junior Tutor of His Holiness the Dalai Lama, he received teachings on the lam-rim graded course to enlightenment which outlines the entire sutra path to buddhahood. In addition he received many tantric initiations and discourses from both the Junior Tutor and the Senior Tutor, Kyabje Ling Rinpoche, as well as from Drag-ri Dorje-chang Rinpoche, Zong Rinpoche, Lhatzün Dorje-chang Rinpoche and many other great gurus and meditation masters. 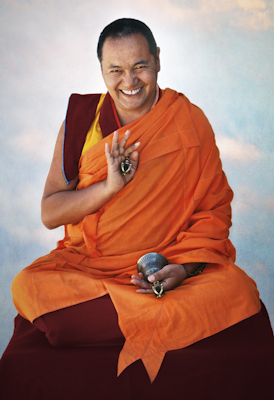 Such tantric teachings as Lama Yeshe received provide a powerful and speedy path to the attainment of a fully awakened and purified mind, aspects of which are represented by a wide variety of tantric deities. Some of the meditational deities into whose practice Lama Yeshe was initiated were Heruka, Vajrabhairava and Guhyasamaja, representing respectively the compassion, wisdom and skilful means of a fully enlightened being. In addition, he studied the famous Six Yogas of Naropa, following a commentary based on the personal experiences of Je Tsong Khapa.

Among the other teachers who guided his spiritual development were Geshe Thubten Wangchug Rinpoche, Geshe Lhundrub Sopa Rinpoche, Geshe Rabten and Geshe Ngawang Gedun. At the age of eight he was ordained as a novice monk by the venerable Purchog Jampa Rinpoche. During all this training one of Lama Yeshe's recurring prayers was to be able some day to bring the peaceful benefits of spiritual practice to those beings ignorant of the Dharma.

This phase of his education came to an end in 1959. As Lama Yeshe himself has said, "In that year the Chinese kindly told us that it was time to leave Tibet and meet the outside world." Escaping through Bhutan, he eventually reached northeast India where he met up with many other Tibetan refugees. At the Tibetan settlement camp of Buxa Duar he continued his studies from where they had been interrupted. While in Tibet he had already received instruction in Prajnaparamita (the perfection of wisdom), Madhyamaka philosophy (the middle way) and logic. In India his education proceeded with courses in the vinaya rules of discipline and the Abhidharma system of metaphysics. In addition, the great bodhisattva Tenzin Gyaltsen, the Khunu Lama, gave him teachings on Shantideva's Bodhicaryavatara (Guide to the Bodhisattva's Way of Life) and Atisha's Bodhipathapradipa (Lamp for the Path to Enlightenment). He also attended additional tantric initiations and discourses and, at the age of twenty eight, received full monk's ordination from Kyabje Ling Rinpoche.

One of Lama Yeshe's gurus in both Tibet and Buxa Duar was Geshe Rabten, a highly learned practitioner famous for his single-minded concentration and powers of logic. This compassionate guru had a disciple named Thubten Zopa Rinpoche and, at Geshe Rabten's suggestion, Zopa Rinpoche began to receive additional instruction from Lama Yeshe. Zopa Rinpoche was a young boy at the time and the servant caring for him wanted very much to entrust him permanently to Lama Yeshe. Upon consultation with Kyabje Trijang Rinpoche, this arrangement was decided upon and they were together until Lama's death in 1984.

Teachings by Lama Yeshe
A Tribute to Lama Yeshe: Wisdom Magazine No. 2