Who Are You and Where Can You Be Found? 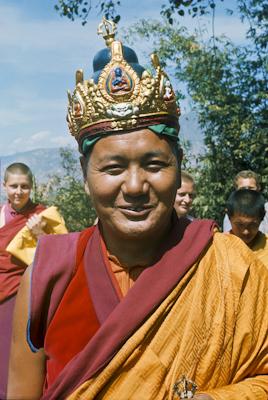 It’s essential to dissolve the normal ego projection of the physical nervous system body; to absorb the image that our conception of ego instinctively feels—that I’m somewhere around here; Thubten Yeshe is somewhere here. Where is Thubten Yeshe? My ego’s instinctive interpretation is that I’m here, somewhere in my body. Check for yourself. See what comes up in your mind when you think of your name. The huge mountain of your self will arise. Then check exactly where that mountain of “me” can be found. Where are you? Somewhere around your body. Are you in your chest, in your head?

You feel this instinctively. You don’t have to study philosophy to learn it; you don’t have to go to school; you parents didn’t teach you. You’ve known this since before you were born. Buddhism describes two kinds of ego identity: kun tag and lhen kye. The one I’m talking about is lhen kye, the simultaneously born one; the one that exists simply because you exist. It was born with you; it needs no outside influence for its existence. Like the smell that comes with a pine tree, they’re one. The pine tree doesn’t grow first and then the smell comes later. They come together. It’s the same with the innate sense of ego; it comes at conception.

Kun-tag means the sense of self that’s philosophically acquired. It’s something that you learn through outside influence from teachers, friends, books and so forth. This is the intellectually derived ego. Can you imagine? You can even acquire an ego through reading. This one is easier to remove, of course, because it’s more superficial. It’s a gross conception. The simultaneously born sense of self is much, much harder to get rid of.

This instinctive conception of ego is really convinced that around my body is where you’ll find Thubten Yeshe. Someone looks at me and asks, “Are you Thubten Yeshe?” “Yes,” I reply, “I’m Thubten Yeshe.” Where is Thubten Yeshe? Around here. Instinctively, I feel I’m right here. But I’m not the only one who feels like this. Check up for yourself. It’s very interesting.

You can see that the relative reality of Thubten Yeshe is simply the name that’s been given to this bubble of energy. That’s all Thubten Yeshe is. That’s why the great philosopher and yogi Nagarjuna and the great yogi Lama Tsongkhapa both said that all phenomena exist merely in name. As a result, some early Western Buddhist scholars decided that Nagarjuna was a nihilist. That’s a conclusion that could be reached only by someone who doesn’t practice and spends all his time dealing in concepts and words.

If I were to show up somewhere and suddenly announce, “You’re all merely names,” people would think I was crazy. But if you investigate in detail the manner in which we’re all merely names, it becomes extremely clear. Nihilists reject the very existence of interdependent phenomena but that’s not what Nagarjuna did. He simply explained that relative phenomena exist but that we should view them in a reasonable way. They come, they go; they grow; they die. They receive various names and in that way gain a degree of reality for the relative mind. But that mind does not see the deeper nature of phenomena; it does not perceive the totality of universal existence.

Phenomena have two natures: the conventional, or relative, and the absolute, or ultimate. Both qualities exist simultaneously in each and every phenomenon. What I’ve been talking about is the way that bubbles of relativity exist conventionally. A relative phenomenon comes into existence when, at any given time, the association of superstition and the conception of ego flavors an object in a particular way by giving it a name. That combination—the object, the superstition giving it a name and the name itself—is all that’s needed for a relative phenomenon to exist. When those things come together, there’s your Thubten Yeshe. He’s coming; he’s going; he’s talking. It’s all a bubble of relativity.

If right now you can see that Thubten Yeshe’s a bubble, that’s excellent. It helps a lot. And if you can relate your experience of seeing me as a bubble to other concrete objects you perceive, it will help even more. If you can see the heavy objects that shake your heart and make you crazy as relative bubbles, their vibration will not overwhelm you. Your heart will stop shaking and you’ll cool down and relax.

If I were to show you a scarecrow and ask if it was Thubten Yeshe, you’d probably say it wasn’t. Why not? “Because it’s made of wood.” You’d have a ready answer. You can apply exactly the same logic to the argument that this bubble of a body is not Thubten Yeshe either.

The conception of ego is an extreme mind. It holds very concretely the idea that somewhere within this bubble of the four-element combination body there exists a self-existent I. That is the misconception that we must release. If the ego mind assessed the situation reasonably and was comfortable and satisfied perceiving that superstition giving the name Thubten Yeshe to this interdependent, four-element bubble was enough for Thubten Yeshe to exist, that would be a different story. But it’s not satisfied with that. It cannot leave that alone. It wants to be special. It wants Thubten Yeshe to be concrete. It’s not satisfied with Thubten Yeshe being a mere name on a collection of parts. Therefore, it conceives an imaginary, unrealistic, exaggerated, concrete self-entity. The method we use to remove that conception is to transform our bubble of relativity into light.

Emptiness > Nature of the "I"