This teaching is an excerpt from A Commentary on the Yoga Method of Divine Wisdom Manjushri, given at Manjushri Institute, Cumbria, England, in August, 1977. Edited by Nicholas Ribush. Published in Mandala magazine, April 2009. 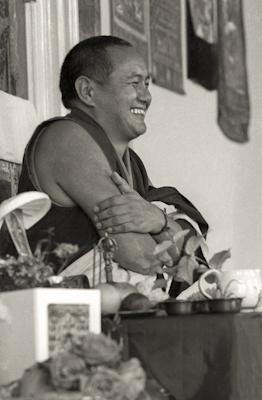 Tibetan texts on tantric yoga sometimes say that you should see whatever appears to your sense perception as the rainbow light body of the deity that you’re practicing—clean clear in nature, non-substantial, non-dual, a reflection of the wisdom of totality, a transformation of absolute wisdom. This is what we practice, what we try to experience.

When you do experience this—the blissful rainbow body that is a transformation of the totality of absolute wisdom—when you have contemplated this enough, you see the sense world as illusory, in the way that a magician’s illusions do not exist as they appear to ordinary perception. When you have developed this understanding, even during session breaks, instead of appearing concrete, the outer, sense world appears as an illusion.

Why do we say that the phenomena of the sense world appear to us as illusory? An illusion is something that does not exist in the way it appears; it’s not real. It’s a false vision; it gives us a false impression. It is misleading to believe in and follow it. Similarly, if we don’t see the objects of the sense world as illusions, in fact, if we believe the opposite, that these phenomena are real, dualistic, concrete entities, we are misled.

Why are all these relative conceptions, movements and energies illusory? Because in appearance they seem to be real, whereas in reality, they are something else. The universal reality of all relative existence is something else; therefore, it is like an illusion.

Saying that relative existence is like an illusion is not just some philosophical fabrication. Nor does it mean that you lose your sense of proportion or your ability to discriminate and that everything gets all mixed up, like soup. It means that you see the phenomena of the sense world as an illusory bubble, simultaneously recognizing that these dualistic manifestations are actually non-dual in nature; they are born from the space of insubstantial non-self-existence and disappear back into it.

What is the psychological effect of seeing all this as an illusion? This wisdom is the antidote, or the solution, to the extreme mind. For example, in the morning, for some reason, you might be extremely happy. Some bubble of excitement appears, you perceive and believe it and think, “Oh, fantastic! I’m happy.” You feel incredibly overestimated happiness. By receiving the relative bubble hallucinated vision of perhaps one chocolate from some bubble man or woman, you feel an incredible, extreme explosion of happiness. In the terminology of Buddhism, such extreme happiness is negative. It’s too uncontrolled. Its nature, its function, its effect is to bring you down. So, in the morning, some bubble like that appears, and you’re interested. In the afternoon, nothing happens, so you’re bored. Your mind comes down; further and further down.

Beauty exists. I’m not saying that we have to reject beauty. What should concern us, however, is the way our projection of concreteness, independence and self-existence onto the relative bubble of transience, dependence and non-self-existent overpowers, overwhelms and dominates our entire reality.

How do you perceive that object of happiness or that object of misery? If you see it as illusory and non-dual, extreme feelings that pump you up so that there’s no space for other feelings cannot function. You have no unequal, unbalanced energy.

If we can recognize the unity of the absolute reality of these two extreme objects, if we can see how these objects are in reality equal in nature—and also in nature with ourselves, the subject—our lives will be balanced.

For example, in the morning you give your friend a chocolate: “Thank you so much; I’m so happy!” She’s extremely up. In the afternoon you’re busy doing something else and don’t have time to give her a chocolate; she’s completely down. How can you handle that type of relationship? How can you keep it going? It’s impossible, isn’t it? You want to have a good relationship with that person but her psychologically extreme qualities make it impossible for you to maintain balance. Of course, it’s difficult for her, too.

This is common. We’ve all had such experiences. In life, we get involved with different people. With some of them it’s impossible to communicate well and maintain good relationships because they’re so up and down.

If you have realized the reality of non-self-existence, if somebody praises you, prostrates to you or anoints you with perfume while another criticizes you, complains about you or even beats you, you have the space to maintain balance. Why is there space? Have you no mind? Are you out of your mind? Have you lost all feeling? Are you no longer human? Western intellectuals might question me like this. No—you have universal consciousness. What you have lost is the attitude of fanatical, extreme, dualistic grasping. That mind has disappeared.

We lamas have a technique for practicing this kind of detachment. You look at your reflection in a mirror and imagine two people, one hurling insults at the you in the mirror, the other praising and trying to please your reflection as much as possible. As you might expect, the you in the mirror pays attention to neither of them. Now, you’re going to argue that of course the reflection doesn’t respond; it has no mind. There’s no reason for it to be happy or unhappy. But this is not an exercise in logic; this is the lamas’ scientific technique for training our minds to overcome the eight worldly dharmas. Try it out for yourself; you’ll see that it works.

However, where there’s no dualistic mind, there’s no extreme view. When you discover that all your up and down happiness and unhappiness comes from your unbalanced mind, no matter how much people heap praise or criticism upon you, you are not swayed by your emotions. You remain balanced. If you ever find yourself shaking with emotion, try to remember that it’s because you’re projecting a dualistic self-entity into whatever magic bubble is upsetting you and holding that hallucination to be real; that this is what’s making you unbalanced. Try to recognize that your conception is mistaken; that your belief that the hallucination is true is wrong. When you realize and experience this, you will eliminate all your extreme, unequal feelings.

Let’s look at this simply. Last year you saw something that caught your interest. When you bring it to mind today, it seems to be exactly the same as it was last year. The same applies even if it was ten years ago that you saw it. Not only years—even if it was lifetimes ago, you can still recollect it, “So nice; so good.” You can’t forget it; it comes back again and again. Now, is the way you perceive the reality of this object whose memory keeps coming back from so long ago realistic or not? Of course, it’s completely unrealistic.

If I were to ask you intellectually if that object is the same now as it was back then, you’d tell me that that’s impossible. All objects are impermanent; they’re constantly changing. Your logic would be crystal clear on this point. But the conception in your memory is of the object as it was back then: solid and unchangeable. That’s the one you keep remembering. You can see how this is wrong.

This is especially true if the object is something organic, like a person or a flower. If it’s something like concrete, superficially at least, it appears longer lasting. But we can see organic things constantly changing; their impermanence is readily apparent. Therefore, it’s impossible for them to retain over the years the same qualities that appealed to you originally. But even though we assent to this intellectually, beneath the intellect, in our subconscious, the memory of those objects as we first saw them keeps on coming. It’s completely unrealistic, and our extreme overestimation gives us an unbalanced memory of them. This is just an example, but our view is just as extreme with every other object that bring us happiness and unhappiness. It comes from ego and is like an illusion; like an illusion.

Why am I going on and on about this? No matter how many words I speak, talk can never equal experience. Words are still imitation; artificial, compared to experience.

Therefore, it’s very important to train your mind skillfully. Don’t push; don’t squeeze yourself. Seeing reality has to come naturally; you can’t force it. If you squeeze too much, again, there’s no space.

Sometimes you see the Tibetan term “mind training.” I don’t know what your connotation of training is; what impression you get. Perhaps you think it’s some kind of pumping. Don’t interpret it that way. You don’t have to pump yourself. Train your mind to see reality; feel reality, gently, naturally, skillfully.

When you dream, you again hold concrete, dualistic conceptions. Those wrong conceptions are strong and you believe them to be true. In your dream, there’s no space for you to recognize your dream as a dream. When you wake up, you can remember how real it felt. Sometimes you can tell a friend about a dream so enthusiastically that someone who overhears you talking thinks you’re describing events that really happened, and is surprised to find out that it was only a dream you were talking about. If—instead of being completely intoxicated by the misconception and holding on to your concrete imagination of subject and object—you can learn to recognize a dream as a dream while you are dreaming, even if you are having a terrifying dream, you will not be afraid.

This is great psychology. If, in our constant daily dealings with the world and other people, we can maintain recognition of all relative concepts and energy movement, whether they be happy or unhappy, as an illusion, as a dream, we will be liberated. In a sense, things are like illusions, like a dream, in that they do not exist in the way that our superstition projects. If we can realize that, we will be liberated, balanced.

Some people are incredibly happy one day, laughing all the time, almost uncontrollably, and completely miserable the next, not even a smile. I’ve seen many people like that, completely up and down. It shows that they’re unbalanced.