We Need Mindfulness to Ascertain Impermanence

Lama Zopa Rinpoche taught that we need to practice mindfulness, seeing that all causative phenomena are in the nature of impermanence, at the 30th Kopan Meditation Course, held at Kopan Monastery, Nepal, in December 1997. This teaching is excerpted from Lecture Eight of the course. Lightly edited by Gordon McDougall. 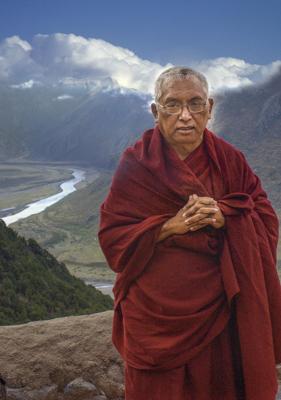 When we look at things—friend, enemy, stranger, the five sense objects—we see that they are transitory; it is their nature to change, to decay, not only day-by-day, hour-by-hour, minute-by-minute, second-by-second, but they even change within a second. Therefore, these phenomena can be stopped at any time.

And eventually, by developing the mind on the path, we will be able to completely cease even the seeds of delusions. Particularly, by developing the wisdom directly perceiving emptiness, by actualizing this, we can completely cease even the seeds of delusions, making it impossible for disturbing thoughts to arise again. In that way, we can achieve everlasting happiness, the complete cessation of the whole of suffering and its causes.

And due to practicing this mindfulness meditation on impermanence, realizing how causative phenomena are in the nature of change, we can not only achieve liberation from samsara for ourselves, because this is part of the section on renunciation in the lamrim, one of the three principal aspects of the path, from this we can also attain bodhicitta and then complete the Mahayana path and achieve full enlightenment and bring all sentient beings to full enlightenment.

Our continuation of the samsaric suffering did not have a beginning and while we continue to hold this wrong concept of looking at causative phenomena as permanent and, because of that, generating desire that clings on to these objects, samsaric suffering will be endless. Unless we can do something in this life, unless we can make some change to our mental continuum in this life, we will have to continuously live our life with the same old mind, with this wrong concept of permanence, looking at impermanent phenomena as permanent and generating desire for them. That clinging, that attachment makes samsara endless.

So, we can concentrate on this. We can look at how the nature of all causative phenomena is impermanence.

Concentrate intensively on emptiness like this, looking at yourself as empty, at your actions as empty, and at all objects, all phenomena, as empty from their own side.

Kopan Course No. 30 (1997)
E-letter No. 221: November 2021
Look at All Causative Phenomena as Illusory
Repaying the Kindness of Others
The Special Attitude of Bodhicitta