Look at All Causative Phenomena as Illusory

Lama Zopa Rinpoche taught that all things are transitory and empty of inherent existence at the 30th Kopan Meditation Course, held at Kopan Monastery, Nepal, in December 1997. This teaching is excerpted from Lecture Five of the course. Lightly edited by Gordon McDougall. 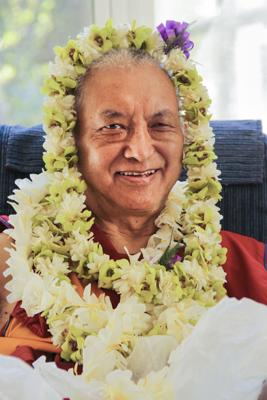 Then, the next advice of Buddha to us sentient beings is this.

A star, a defective view, a butter lamp,
An illusion, a drop of dew or a bubble,
A dream, a flash of lightning, a cloud—
See causative phenomena as such!

Causative phenomena means everything in our life: our body, our material possessions, the surrounding people such as family, friends and enemies, and all sense objects. The Buddha is saying to look at all these causative phenomena as transitory, like a star that shimmers at dusk, or like the object of somebody whose vision is defective, who hallucinates, like having visions of hairs dropping in their vision. When you eat you can have the vision of hairs falling but there are no hairs; it’s an illusion. There is no such thing in reality.

Then, we should look at them as like a dream and like a flash of lightning. There are two things to understand here. Looking at causative phenomena as like a dream. For example, the day when death comes on us, the vivid appearance of this life, having possessions, property, a house, family, friends, enemies, including our own body—the vivid appearance of all these things, it happens and then it’s gone. When death comes, this vivid appearance happens and it’s gone. Having had all these things, they are now gone; they are all transitory, impermanent.

The person who passed away just becomes an object of memory. And everything becomes like that, objects of memory. So, that’s one thing. It’s like last night’s dream that has happened and now it’s gone. In the dream, all those vivid things happened, but now they are nothing.

In a dream we travel, we find a friend, then we have a party. Then we get children and then problems happen in the dream, so many worries. Or in the dream we have so much wealth. We buy a huge apartment, with many swimming pools and many Mercedes. What’s the new car? What? [Students prompt] Exis! So, we buy many Mercedes or Exis. Huh? Oh! Lexis! We buy many Lexis. We become so wealthy, we have so many things, we achieve so much. And then suddenly we wake up. Then, there’s nothing!

So you see, there are all these vivid appearances in a dream, where we had all these things, we had kind of a whole life in the dream, and when we wake up they are just objects of memory. Our life is the same. Even though we cannot realize now how this life is like a dream, causative phenomena are like a dream, transitory. When the day of our death comes, we realize it is like that. At the time of death, we see our life like that, as if we woke up from a dream, transitory.

That is one way to understand how causative phenomena are like a dream, by seeing how they are transitory—there for just a short time and then gone.

The other way to understand how this is like dream, is that, as I mentioned yesterday, everything that appears in a dream came from our mind, even the dream. Our mind makes up the label, we believe in the label and then it appears back to us. This is true of all these things—friends, enemies, possessions, all this property, all this extreme luxury, the apartment or the house, the Mercedes or Lexis or whatever—all this comfort, this enjoyment and all these things, all these appearances. How they started is that first, our mind made up the label, then we believed in what our mind labeled and then it appears back to us as that. All these objects we see in a dream, all these appearances come from our own mind. They don’t come from their own side, they come from our own mind. And it is same with everything. Everything is merely imputed by the mind, but everything—all those things in a dream, our I, our body—everything appears to us as not merely labeled by the mind. Everything appears as something real, a real I, a real body, a real Mercedes, a real Lexis, a real house. They seem to have nothing to do with our mind. They appear not merely labeled by our mind.

They appear as something real, appearing from their own side, but if we look for these truly existing things we cannot find them. If we analyze all these things, including the I and all the rest of the causative phenomena, all which appear not merely labeled by mind, as something real appearing from there, when analyzed, they cannot be found anywhere, neither on the base nor anywhere. But when they are not analyzed, it looks like they actually exist. They are just like the things we see in a dream, appearing that way, even though they are merely imputed by the mind.

Kopan Course No. 30 (1997)
E-letter No. 221: November 2021
Repaying the Kindness of Others
The Special Attitude of Bodhicitta
We Need Mindfulness to Ascertain Impermanence