We Cannot Live Without Harming Others

At the 2009 CPMT meeting in France, in a question and answer session with Lama Zopa Rinpoche, Nicholas Ribush, director of Lama Yeshe Wisdom Archive, suggested that FPMT promote a policy of veganism. Lama Zopa Rinpoche gave the following response.

Edited by Nicholas Ribush. Published in Mandala magazine, July 2013. See also On Becoming a Vegan: When Vegetarian is Not Enough. 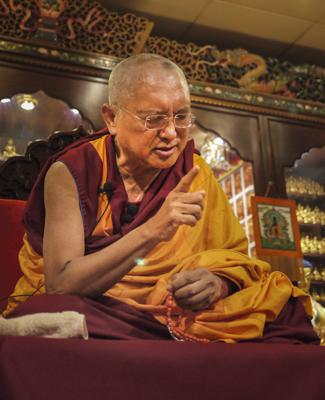 Nicholas Ribush: Rinpoche, how do you feel about FPMT promoting a policy of not only vegetarianism, but also veganism, because of the cruelty to animals inherent in the production of dairy products and so forth?

Lama Zopa Rinpoche: The reality is that we cannot live without harming others. There’s no way we can survive without others being harmed, killed. We can’t survive for even a day without causing suffering to others.

This is how life is in samsara and that’s why the ultimate answer is to get out of samsara, to be liberated from it. Only when you free yourself from samsara by actualizing the remedy, the true path, the wisdom directly perceiving emptiness, which directly terminates the delusions, the disturbing thought obscurations, and the negative imprints, the seeds of delusion, will you no longer have to reincarnate, no longer have to go through the cycle of death and rebirth, experiencing all the sufferings of the six realms, one after the other.

Otherwise, even if you’re eating a plate of vegetables, it’s likely they were sprayed with insecticide when they were grown. And if you eat unsprayed ones, there may be many tiny green insects on them under the leaves and so forth that you don’t notice because the leaves are green too. So when you prepare food, you have to check each piece very carefully and put those with insects outside gently so that the insects can continue to live on them, not just throw them in the trash.

Many times I’ve seen vegetables brought in from the garden with many tiny insects on them. You really have to inspect them carefully inside and out, because if you’re unaware, if you haven’t seen them before, you wouldn’t think there were insects there since they blend in so well. Of course, if they didn’t have a mind, if they didn’t have feelings, it wouldn’t matter, but they do; so you have to be careful with unsprayed vegetables and put those with insects on them into a separate container and take them outside.

Also, of course, many insects die in the growing of food itself. When gardens are dug and fields are plowed, so many insects get killed. As I always say, think how many die for even one grain of rice. Paddies are dug, flooded and drained; many sentient beings die at each stage of growing one crop of rice. And that rice came from a previous crop, and that from the one before and so forth back to the time when rice began to be harvested, perhaps thousands of years ago. So how many beings have suffered and died during that incalculable period? And how many people have created negative karma harming others in that way? These are unimaginable numbers. For one grain of rice.

So now think of the whole plate of rice. How many sentient beings suffered and died for that? Think back to when rice began to be grown in this world. When you contemplate all this carefully there’s no way, no way, you can eat the rice without wanting to do something meaningful to benefit all those numberless sentient beings who died for each grain of it. You feel it’s impossible to eat just for your own happiness; eating for yourself, completely ignoring all those beings who died and who created negative karma for that rice, becomes the most difficult thing, most painful thing, to do.

This is just to give you an idea of how many sentient beings have to suffer and die for your happiness, for your life. They’re numberless. Wow!

Then there’s water. The water we use is full of sentient beings that can be seen only through a microscope and that have to die for us.

It’s the same with the clothing we wear. Whether it’s made of fiber that’s grown or derived from animals, it has a long evolution and there’s a huge amount of fear, suffering and killing for the many sentient beings involved. Think, for example, of the silkworms that are boiled alive so that we can make silk thread from their cocoons. Can you imagine the pain they experience?

Then there are the buildings we live and work in. Many beings get killed and many others create negative karma during their construction.

So you can see, there’s basically no pleasure or comfort we enjoy that does not involve numberless sentient beings’ suffering, death and negative karma. That’s why it’s so urgent that we practice Dharma. It’s the most important thing we can do, more important than anything else.

If you don’t attain liberation from the ocean of samsara or enlightenment in this life, then you need to get an upper rebirth in your next life, meet and practice Dharma, develop your mind, and in that way achieve liberation from samsara and eventually the full enlightenment of buddhahood.

Thus you can see how achieving enlightenment in order to liberate numberless sentient beings from the ocean of samsaric suffering and bring them to enlightenment is of the greatest urgency, the most important thing in daily life. Wow!

In order to do that you need to attain the path, which starts with the three higher trainings or the gradual path of the lower capable being, taking refuge and following karma. That means abandoning negative karma and practicing good karma, avoiding the ten nonvirtues and living in the five lay vows. That allows you to avoid a lower rebirth and get a higher rebirth so that you can continue developing your mind on the path to liberation and enlightenment by practicing bodhicitta and the six paramitas and then the tantric path.

The fact that we have met the teachings at this time shows that we are the luckiest, most fortunate people in the world. Not only have we been born human, which is extremely rare, but we have also received that rarest of human rebirths, the perfect human rebirth, with all the freedoms and opportunities that brings. However, such a life does not last long and can stop at any time. This incredible, wishfulfilling opportunity where we have met the entire Dharma—sutra and tantra—can finish at any moment.

Therefore, the most important thing we can do with our life is to learn and practice Dharma and actualize the path. That’s more important than anything else in life. Along with that we can engage in many other activities to give other sentient beings the opportunity to meet the Dharma, thereby bringing happiness to many others. We can give others the chance to study and practice Dharma so that they can learn to overcome suffering and escape the cycle of death and rebirth and not have to continuously go through the sufferings of the six realms, one after the other, and eventually achieve enlightenment.

Thus for both ourselves and others, attaining enlightenment is the ultimate thing. But of course, the basis of that, the basic practice of Buddhism, is not harming others, and on top of that we try to benefit others as much as possible. The more we reduce the harm we give others, the more we benefit them.

On Becoming a Vegan: When Vegetarian is Not Enough
Protecting Animal Welfare
The Udamwara Lotus Flower: Protecting the Life of Helpless Beings