On Becoming a Vegan: When Vegetarian is Not Enough

An article by Dr. Nicholas Ribush on becoming a vegan, first published in Mandala magazine, July 2013.

"Veganism is not just a diet. It is not just a 'lifestyle.' It is a nonviolent act of defiance. It is a refusal to participate in the oppression of the innocent and the vulnerable. It is a rejection of the insidious idea that harming other sentient beings should be considered a 'normal' part of life. It represents a paradigm shift toward a new default position that violence for pleasure, amusement, or convenience can never be justified." – Gary L. Francione 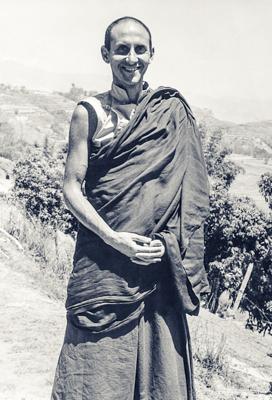 After my first Kopan meditation course (October-November 1972), I decided to stay on at the monastery and became a vegetarian by default, since meat was not on the general menu. Lama Zopa Rinpoche was a vegetarian and didn’t even eat eggs (“the seed of desire”). Lama Yeshe sometimes ate meat to sustain his body.

In January 1974, most of Kopan went to Bodhgaya for the Kalachakra initiation and the ordination of 10 of us Westerners. Despite the bliss of it all, the physical conditions were far from ideal and I finished up with worms, ascaris lumbricoides, the giant roundworm. Yes. Giant.

I lost a lot of weight and was pretty grumpy, but as a new monk, I didn’t want to kill the worms. “Rubbish,” said Lama Yeshe. “Your life more benefit sentient beings than worms. Take medicine.” So I did. He also told me to eat meat to regain my health and ordered the Kopan cooks to prepare it for me.

Over the next two or three decades, I had an on-again-off-again relationship with vegetarianism, convincing myself with the usual arguments that eating meat was OK. The Buddha didn’t expressly forbid it; there were just three types of meat you should definitely not eat. Most Tibetan lamas ate meat; most of my many gurus did. You can bless and benefit the dead animal by reciting certain mantras over the meat. Even if you eat rice, dal and vegetables, many sentient beings die in the production of those foods. If you eat only large animals, where one can feed many people, it’s better than one person eating many small ones, like shrimp or poultry. In 2007, Mandala ran some articles on vegetarianism elaborating on several of these points and more [“Vegetarianism: A Healthy Debate” and “The Case for Not Eating Our Friends”].

After my initial Kopan course, I did a short lam-rim retreat during which I became increasingly excited about the Dharma and wrote to my family and friends back in Australia, encouraging them to come to Kopan. Consequently, over 20 of them showed up at the fourth course, March 1973, including my mother. She became a Buddhist and immediately became a lifelong vegetarian, often chastising me for my meat eating, impervious to my arguments justifying it. But I was too attached to meat to give it up and too unaware of what went into its production to follow her lead.

In 2004, Kopan’s Khen Rinpoche Lama Lhundrup asked FPMT students to go vegetarian for as much of the year as they could and to dedicate the lives saved to the long life and health of His Holiness the Dalai Lama and Lama Zopa Rinpoche. He said that His Holiness the Dalai Lama’s Private Office was encouraging all Tibetans to go vegetarian and to dedicate the lives saved to the long lives of their gurus, and that all the monks and nuns at Kopan were going to comply. As a result, FPMT students pledged tens of thousands of vegetarian days and some 50 students became vegetarian for life. At first I committed to be vegetarian a few days a week, but then I did some online research into the way animals are raised and killed for food and immediately decided to become a fulltime vegetarian for life.

I wrote about this briefly in the December 2004 LYWA e-letter, saying that I didn’t know why it took me more than 30 years of Buddhism to come to this conclusion. As Rinpoche often says, the nature of attachment is such that it obscures the shortcomings of attachment. My attachment to meat prevented me from looking at the issue objectively. I hid behind my ignorance. But since the advent of YouTube, there’s really no excuse, nowhere to hide. Search for videos with the terms “meat cruelty,” “animal cruelty,” “beef cruelty,” “pig cruelty,” “chicken cruelty” and so forth and you’ll see.

The experience of watching these was what I imagine a realization must be like. Of course, I have no Dharma realizations; this was kind of a worldly one. A sudden, deep, life changing understanding that led me to declare to my wife, Wendy, “I’m never eating meat again. I want no part of this entire process.” I defy you to watch these videos and not be moved.

After a couple of years as a vegetarian, I went back to YouTube and looked at several dairy-cruelty and egg-cruelty videos. Another realization, not quite as strong as the first one, but definite nonetheless. And again, incredulity at how ignorant I was. Milk and eggs come from the female of the species. What happens to the males? They are brutally killed, of course; usually soon after birth.

You can’t have any dairy products – milk, cream, butter, cheese, yogurt, ice cream – without the deaths of billions of male calves. Often these are raised in tiny cages for the first few months of their lives before being slaughtered for veal. Look at the veal-cruelty videos. And look at how dairy cows are treated. The contented cow grazing in a lush green pasture story is a myth. A dairy industry lie, actually. Most are raised on factory farms standing in mud and excrement, milked by machine and forcibly impregnated on what some in the industry call a “rape rack.” At birth their babies are torn away from them, causing great suffering to both. The milk meant for the calves is then stolen for human consumption. Do we have here the three non-virtuous actions of body: killing, stealing and sexual misconduct?

Eggs are not much better. Nearly all the billions of male chicks born annually are killed almost immediately by being ground up alive or smothered or gassed in large plastic bags with thousands of others. I could not bear to be part of this any longer.

Finally, I looked at the cruelty of the wool and leather industries, the incredible exploitation of bees in the production of honey, the torture of animals in medical research and circuses and their misery in zoos and decided to become a vegan, to distance myself completely from the animal slavery business. I mean, the essence of Buddhism is “if you can’t help others, at least don’t harm them.” All this is just so contrary to the Dharma.

Lama Zopa Rinpoche once said how fortunate were those who truly felt compassion for others. For the first time, I felt that I might be one of those people. Becoming a vegetarian is a good start, but it’s nowhere near enough. There’s probably more suffering in a glass of milk than a pound of steak. And these days there’s no need to consume animal products to survive. In fact, there’s plenty of evidence that it’s far healthier for most people not to.

At the last CPMT meeting, France, 2009, in a question and answer session with Rinpoche, I suggested instituting an FPMT policy promoting veganism. I wasn’t surprised by his reply, fitting the issue into his vast perspective. Nevertheless, for me, his final paragraph, reminding us that the basic Buddhist practice is to not harm others, vindicated my decision to go vegan. As long as we use animal products of any kind, we’re far more involved in their enslavement, torture and suffering than if we don’t.

And I think the reason that the Buddha, His Holiness the Dalai Lama and Rinpoche can’t just come out and tell their followers to be vegetarian, much less vegan, is that not everybody can do it from the start, and to do so would be to drive many potential students away. Like me, we have to be brought along gradually.

The reaction many people have when you tell them you’re a vegan is funny. Right away they become defensive, as if you’re judging them. Even Buddhists; perhaps especially Buddhists. You’re immediately labeled pious or militant or self-righteous or something like that. I would have thought that living in a way that clearly decreases animal suffering is the most Buddhist thing you can do. But people do seem threatened by it. It’s that attachment at play again.

And veganism is not only good for the animals; it’s also good for the planet and, as I said, good for one’s own health. Do some research; check it out. Vegans advocate for an end to animal slavery, an end to the selfish and callous exploitation of others, an end to speciesism. I wonder if people advocating for the end of human slavery were seen the same way. They probably were … and look how right they turned out to be!

There are more vegan websites than you could ever read. Some are better than others. The Abolitionist Approach is one of the best, but there are plenty of others. And there are loads of vegan food pages, such as Vegan Yum Yum. Google will take you there. Please, with an open mind, for the sake of mother sentient beings, for the sake of the planet and for the sake of yourself, investigate what I have said.

The Udamwara Lotus Flower: Protecting the Life of Helpless Beings
We Cannot Live Without Harming Others