In this teaching Lama Yeshe discusses how to use intensive wisdom to gain insight into the illusory nature of reality. The teaching is excerpted from Lama's commentary on a Chenrezig practice, given at Chenrezig Institute, Australia, in July 1976. Also included is a short interview from June 28, 1977.

First published in Yaktail, a magazine published at Chenrezig Institute in 1977 by Ven. Loden Nyingje (Martin Willson) and Andreas Halm. The complete commentary was subsequently re-edited by Ven. Robina Courtin and published as a book, Becoming the Compassion Buddha. 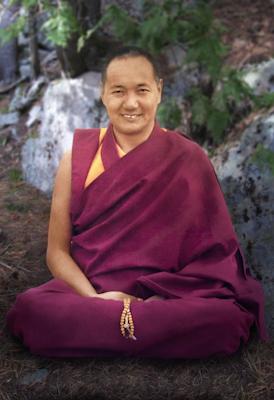 We need to determine that the objects we are perceiving are not true reality because we usually have such concrete beliefs. Since we were born we have been believing our conceptions, saying, “This is real.” This is what you always say. “Why is what I see real? Because I feel it.” “Why do I feel it? Because I see it.” Your logic is just like this—I feel, I see. So to determine that this view, this bubble existence is not real, you need to use intensive wisdom that can see through the bubble. The bubble can catch you, you know, and then you say things like, “Oh, how fantastic it is.” But when you see through the bubble, you can’t get caught like that. Remember the example of the magician who makes an object and then he put it up on show, so that there are three different views of the object.

In his own way, by using some kind of mental energy or mantra, the magician transforms the object into a horse or an elephant. Then three kinds of people look at the object. First of all there is the magician himself: he also sees that there is an elephant there, but he simultaneously perceives it as a bubble, determining that this elephant is not actually a real thing. By seeing the elephant as a bubble, he doesn’t excite himself. He is happy to see the bubble, but at the same time he perceives the non-self-entity of that elephant. He sees the simultaneous unity of the bubble and emptiness. This is a simple example. Things appear for you but you can reject them as being nothing by seeing the non-self-entity nature of such bubbles. Next the magician’s audience come along to see what the show is that day.

He just comes along, you know, and he see the elephant. Just like that. And he believes it. He says, “Oh, look at this fantastic elephant!”

I’m sure some people have such an experience, having the conception of such an object as being real. So this person is occupied by a completely hallucinated mind. When the mantra power or whatever magic energy the magician used has disappeared, then somebody else comes along to look. So all he can see is maybe a bowl with a flower in it. He can’t see the magic view and he doesn’t have such a conception of the object. So there we have three people looking at one object. They see differently and they believe differently. This is a good example of how we see things and how we hallucinate, and you should recognize that all the time. The magician himself, he doesn’t need to reject such a view—he enjoys himself. People come to see and he makes money too. All round, the magician has a good time, so he doesn’t reject that energy—he plays with it. At the same time we don’t necessarily want you rejecting your muesli at breakfast, or your chocolate. It is not necessary that you reject, but that you see the bubble.

When you are in samadhi, or contemplating the mahamudra divine body, then you don’t have the mundane thought vibrations; you don’t have the bubble vision. But from samadhi you come down from old habits, so that is very dangerous, especially in some situations which are kind of like going back into your old family house. You know? At those times you need intensive wisdom to see through such muesli, such bubble reality. Another way of saying it is to say that sentient beings are like a dying man, who has fantastic hallucinations and bubbles, such as seeing an elephant which he believes is real. When you are looking at your desirable muesli, you are perceiving bubble muesli and you see its goodness and you believe in the self-entity of such muesli. But when you are developed so that you can recognize the non-self-entity, then you begin to perceive that instead. At the same time as you see the bubble, you perceive the empty right view within it, and when you are more developed, when you have reached beyond the dualistic mind, even that view disappears. That’s why we say you have perfection when you reach buddhahood—it means you don’t have dualistic view. You have reached beyond that. That’s all.

OK, so it’s very important that during the break times, when you are with the bubble world, you keep mindfulness, intensively seeing the nature of that world. Thank you. So you actualize that, you check up. Just try to experience that. Each time, each moment, try to be continuously mindful and aware. Otherwise everything disappears like a puff of wind.

If you really seriously want to act then it is very important to do so continuously, so session break times are also sessions for you! You come up here for a session and when you go down to the kitchen there is also a session. That’s very important, otherwise you become divided, maybe saying, “Oh, I’m eating delicious muesli, but it’s delusion and I’m not really happy. Oh, oh, oh!” You can well imagine that you would not be happy if you went about feeling like that. It is because you are not integrating—you are rejecting life. “Oh my desire, my terrible desire wants cake! Aaaaaarrrgghh!” It’s not necessary to feel bad like that. It’s really important that you enjoy. “I have so much chocolate and so much material. Many people have nothing. I am guilty!” Some people are thinking like this, but does that help? That doesn’t help anybody. Anyway, I’m sure you people don’t go like that, you know, “Oh, oh I am guilty!” Ridiculous. I’m sure you understand. You enjoy! 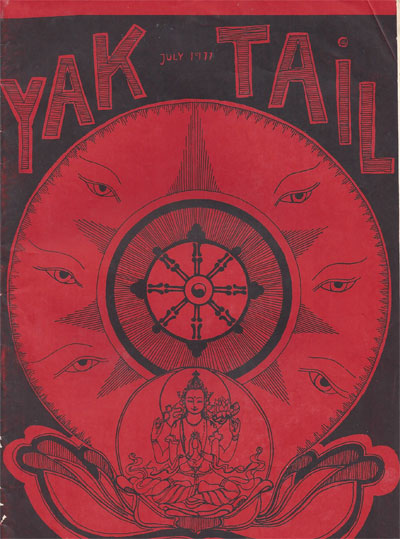 This interview was held on June 28, 1977 during Lama Yeshe’s visit to Chenrezig Institute. With Andreas Halm.

Question: How should Dharma students coordinate physical work and meditation?

Lama: It is very important to coordinate it, because the main point in Buddhism is the action of body, speech and mind; it has to be wisdom action, otherwise there is no purpose, otherwise it’s unreasonable. We have to have bodhicitta attitude. Whatever action for everyday life, dedicate to others. To see that the Dharma is pure but people and society are negative, that’s wrong attitude. Mahayana Buddhism has the power to make an action pure, into mindfulness action. Not to separate oneself from the Dharma, right action, right attitude—not the action—is important.

Question: What do you think should be the most important activity at Chenrezig Institute?

Question:  Why have many people a tendency to live simply, without taking advantage of the modern civilization?

Lama: Some people cannot cope; for simple-minded, narrow people they should be simple, but for intelligent people they should take advantage of the modern society rather than escape it, you understand? Whatever enjoyment, whatever is enjoyment, whatever makes happy instead of becoming like Milarpa. That’s not good, because usually the life does not last very long. Some try to become like ascetics for one or two months, but that doesn’t last very long so they go back again.

Question: Is it possible to change the elements through Dharma practice and should we do it?

Lama: Yes, definitely the nervous system, it changes the external world, it is much more powerful than nuclear power—especially the mantra power, can cure all the diseases, cancer cures by mantra, at example. It can bring the sun and moon onto the earth.