The Thick-skulled Cannot Be Subdued by the Dharma

Lama Zopa Rinpoche advised that if we listen to the teachings but don't practice, our mind will not be transformed, at Kopan Course No. 13, held at Kopan Monastery, Nepal, in December 1980. Excerpted from Lecture 17 of the course. Lightly edited by Gordon McDougall. 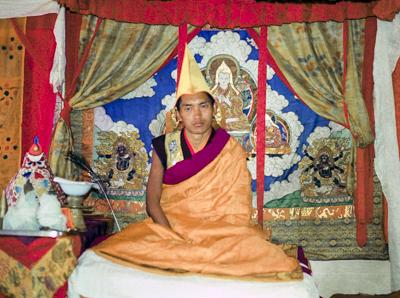 By practicing correctly, you can cure diseases. Perhaps the doctor has given the patient so many kinds of the best possible medicine for their illness, but they just let them pile up on their pillow without ever taking them. They refuse to do what the doctor told them. Of course, they won’t recover. That’s not the doctor’s fault and it’s not the medicine’s fault; it’s the fault of the patient.

As it is said in one of Buddha Shakyamuni’s sutra teachings,

I have explained the extremely pure Dharma. If you do not perfectly practice it after listening, then it’s like a patient carrying a big sack of medicine [without taking it.] It does not cure their disease and they do not recover.

What Buddha Shakyamuni is saying is that even though the patient has a big store of medicine from the doctor, as long as they don’t take it they will never be cured, and similarly, if you don’t practice the Dharma you have heard, no matter how many teachings you have taken, it doesn’t benefit the mind.

There is a saying by the Kadampa geshes,

Tibetans wrap butter in a leather pouch to stop it going rancid. Whereas they treat normal leather with butter to soften it, they don’t treat this leather, so while the butter inside remains soft and edible, the hide it is wrapped in is like a football, solid and quite hard. We should not let our mind become like that.

What the Kadampa geshes are saying is that when evil people—like butchers who kill animals or soldiers who kill many hundreds of people—listen to the Dharma, their minds can be transformed through the Dharma. They can regret the negative karma they have accumulated and generate the strong wish to purify. There are many stories about people whose early life was very evil but, through meeting the Dharma, they have been able to transform their minds and become great holy beings.

For example, most of you can remember Milarepa’s biography, how he led his early life. He used black magic to destroy the whole ground and the house, killing the guests who were upstairs and the horses who were tied to the posts downstairs. His mother planned that on the wedding day, while the guests were greatly excited, he should use black magic. Immediately afterwards the mother ran out. She put her old trousers on and went up to the roof and put out a banner that said some words like “victory.” She was extremely happy to be able to get revenge.

The lama who taught Milarepa black magic was asked to do a puja. When he saw the people dying in the house, it may have changed his mind, so he advised Milarepa to go and see Marpa. That’s how Milarepa met Marpa. After that he asked his guru to look after him and to give him both the means of living and the Dharma. Marpa’s secret mother asked him which one he wanted. He could only receive one, either food or Dharma, but not both. He followed her advice and cared only for the Dharma, completely disregarding any hardship, such as wounds on his skin from his hard work. Despite all the difficulties, without any heresy to Marpa arising, he built the nine-story house. Marpa then told him to tear it down and put all the stones back where they were before. Then, Marpa told him to build the house again. This happened three times.

He was beaten many times by Marpa; he only received scoldings, never sweet words. Marpa refused to give him teachings for so many years, no matter how many times he asked, directly and through Marpa’s secret mother. If Milarepa tried to attend any initiations given by the secret mother, Marpa would see him and make him leave. He spent many years like that.

There are many similar examples, such as Angulimala in Guru Shakyamuni Buddha’s time, who killed 999 people but after receiving initiations and teachings, he became a great holy being in later life; his mind was transformed. Even nowadays, there are many meditators who became great pure Dharma practitioners in later life, the complete opposite to how their lives were earlier.

Although even evil beings can be subdued by the Dharma, the thick-skulled ones cannot be. Even if they read Dharma books, nothing goes in. They don’t attempt to transform their mind, or they might think that what they hear is not right for their mind. Thinking like this, even if they listen to the teaching, the Dharma becomes a very dull subject, like having the same lunch every day. Dharma just becomes something to think about, not something to practice. No matter how many Dharma courses they attend, checking what new subjects there are for them, they never listen in order to benefit the mind. Or they wait to hear something they disagree with in order to argue about it, not listening to the teaching to benefit the mind, but waiting for the mistake!

If you have a thick skull like this, it is very difficult to be subdued by the holy Dharma. For example, because the thick skin of yaks and ox is very hard and tough, it is not flexible and cannot be used to make shoes and other things unless it is treated.

When I was young, I travelled in Tibet with my two teachers from the village where I was born up to the place where they were planning to go, a place called Pagri. I think it took several months. From early morning until night we walked and stopped on the road to take food. First we had to cross the snow mountains to go to Tibet from there. They were not as dangerous as other snow mountains, but there is one peak that was a little bit dangerous. One day, a Tibetan man let me ride his donkey. I think he felt sympathy for me. In the West, everybody in the family has their own special car to go to their job. In Tibet they have a horse!

They went quite fast. My teacher, a nun and another man had to walk with the entire heavy load on their backs: the Tibetan chubas I used to sleep in at night with thick hair inside, Tibetan blankets, firewood and food—they carried the whole load very carefully. They would walk all day on the hard road—and it was very hard—with this heavy load. My teachers were very worried because we were far ahead on horses and they couldn’t walk fast because of the load and the pain in their knees. There was one animal skin which was bald in the center and had hairs all around. When I was a child I would pick it! It was full of holes and had no hair in the center. I was similar to the other young boys in this!

My mother says that I didn’t get much milk from her because I left home when I was very young. She said something like that. I’m not sure. Anyway, they couldn’t catch me. The road was very hard and they were quite old and had pain in their knees. They were very worried that I had been kidnapped by the Khampas. (The Sherpas called all Tibetans “Khampas.”) Finally, I reached a Tibetan’s house. But somehow my teachers recognized the house, even after it had become dark. This family were quite nice. Because we were exhausted, especially my teachers, the family offered us their own soup with dumplings made of barley flour. It was a pleasant night. The moon was dark and of course there was no electricity, but you could see by the fire. I didn’t spend a long time like this.

What I’m trying to say is, when we stopped they had an animal skin which they put on the road and they had black tea. They put some tea in the soft skin and wrapped the skin around it. It’s a very simple way to make tea and it’s very tasty. It’s a very simple way to fix the stomach. If you don’t know how to eat tsampa in bowls, then there’s this way. Tibetan tea is very precious when traveling and because it’s wrapped in the animal skin, nobody knows what it is, so it doesn’t get stolen. We even used the skin to sit on.

Every day we had to walk there was so much pain in the two teachers’ knees and, as the Chinese cars passed, I would think what an incredibly luxury it would be to travel in a car. As we were walking on the road, they held my hand out to get some money to go in the car. We begged a little and there was a little bit of food that came this way, but it was very little. The Tibetan people we met on the way would sometimes give wine and a little tsampa. They didn’t know I was a monk.

To make the skin usable, Tibetans put butter on the very dry, thick skin which they work with their feet until it becomes soft and can be utilized to make shoes or whatever else they want to make. Similarly, after an evil person with an unsubdued mind listens to the Dharma their mind can be transformed. If they meditate on emptiness they can easily generate the realization of emptiness; if they meditate on bodhicitta they can easily generate the realization of bodhicitta. And the same with the thought of renunciation. Whichever meditation the mind is trained in, they can easily attain that realization.

On the other hand, the skin which covers the butter has been in contact with the butter for a long time, but no matter how much time it spends with the butter, it remains very hard. Like that, if you study the Dharma or if you live for a long time at the center or at the monastery where you hear the Dharma and see Dharma books every day, it can become kind of normal. It can become nothing special, nothing beneficial for the mind.

The Dharma king, Dromtönpa, the embodiment of Chenrezig, said,

Like the Kadampa geshes such as Dromtönpa, you should do all three together—listening, reflecting and meditating—and not setting them aside, making each separate. In that way you will be successful. You should take their way of studying the Dharma and practice like them.

Kopan Course No. 13 (1980)
Entering the Tantric Path
The Five Paths
The Buddha Liberates by Guiding Us