The Buddha Liberates by Guiding Us

Lama Zopa Rinpoche explained that the Buddha guides us by revealing the teachings and leading us to practice Dharma, at Kopan Course No. 13, held at Kopan Monastery, Nepal, in Nov–Dec 1980. This teaching is excerpted from Lecture Five of the course. Lightly edited by Gordon McDougall. 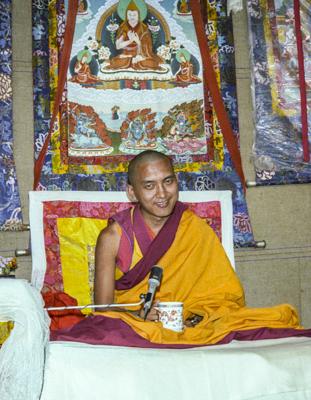 When Guru Shakyamuni Buddha was in India, one day while on his alms round, a woman offered a handful of mustard seeds to the Buddha.1 When somebody made an offering while Buddha Shakyamuni was on his alms round, he always predicted the result of that karma, what kind of rebirth that person would have in their future life, and he predicted that due to this karma the woman would become a buddha called Supranihita. Her husband couldn’t figure it out at all. I think he told Shakyamuni Buddha that he shouldn’t tell lies. How could such a thing be possible?

The Buddha asked him if he had ever heard of a pipal tree whose branches can cover five hundred horse carriages. When he said of course he knew of such a thing, saying it had been his experience, he had seen it. Then Buddha said, “Of course, this karma is also my experience. From such a small karma, planting a seed the size of a mustard seed can produce a tree that has so many branches it is able to cover five hundred horse carriages. It is my experience that your wife offering one handful of mustard seeds will result in her becoming a buddha called Supranihita in the future. That is my experience, even though it is not your experience.” This is similar. Like the husband who couldn’t comprehend the results of his wife’s offering, you can’t understand which realm you will be reborn in, but you should think that, even though it is not your own experience, there will certainly be a result, due to the existence of karma.

A criminal who has committed many crimes and is about to be punished can seek refuge from a top person in the government to save him from the punishment. Like that, you can seek somebody who has the power to save you, to guide you from falling into the realm of the suffering transmigratory beings. That is the Triple Gem, the Buddha, Dharma and Sangha. Just as the criminal who has been saved from punishment would be in danger if they committed the same crime again, you must not only rely on the Triple Gem, you must also do the practice. You must follow the points of the practice shown by Guru Shakyamuni Buddha, the founder of the Buddhadharma.

As it is said in the sutra teachings,

The Great Ones do not wash away sin with water;
They do not rid beings of suffering with their hands;
They do not transfer realizations of suchness onto others.
They liberate by teaching the truth of suchness.2

Because the Buddha liberates sentient beings by revealing the truth, especially emptiness, shunyata, you should think, “In order to be liberated from the evil-gone realms, I will rely with all my heart on the Triple Gem. By doing so, I will follow the practice of karma—the law of cause and result.” Thinking like this is generating the motivation of the graduated path of the lower capable being in general. The meaning of this “in general” you can gradually understand. It means that this is the foundation.

In order to take the essence of this perfect human rebirth, to complete the work of listening, studying and meditating that is the path to enlightenment, to preserve the mind, understanding impermanence gives you strong energy. With such an understanding, all your actions of listening, studying and meditating on the graduated path to enlightenment become pure Dharma and, in that way, they become the cause of enlightenment. They also become the cause of liberation and, by the way, the cause of the happiness of future lives. Meditating on impermanence and death cuts off clinging to this life and also generates great energy to complete the work.

1 In Liberation in the Palm of Your Hand, (p. 390), Pabongka says the offering is a handful of sweetmeats made of sesame. [Return to text]

2 Quoted in Pabongka’s Liberation in the Palm of Your Hand, p. 247. [Return to text]

Path to Enlightenment (lam-rim) > Refuge > Qualities of the Buddha

Kopan Course No. 13 (1980)
Entering the Tantric Path
The Five Paths
The Thick-skulled Cannot Be Subdued by the Dharma