Teachings from a Mani retreat held at the Institut Vajra Yogini, France, in May 2009. 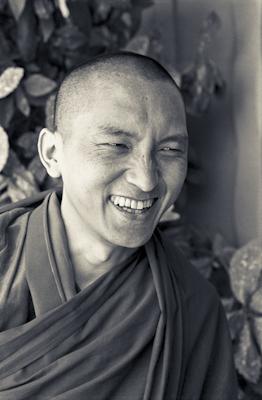 [Rinpoche and the group chant Praise to Shakyamuni and Shakyamuni Buddha’s name mantra.]

So, anyway, how much a person expresses, you know, so strongly. So here, today, we should be doing, not only a hundred times more than that, even a thousand times more than that, even 100,000 times, we should be doing more, stronger, 100,000 times more, than that. Because that’s just only a cause of samsara, gaining another cause of samsara, just another samsaric pleasure, another samsaric pleasure, which is nothing new, which we experienced numberless times from [the peacock calls out again] even the peacock is responding. Even the peacock says yes, yes, yes.

So the complete negative karma of one sexual misconduct has four suffering results. Ripening aspect result, rebirth in the lower realms. The first one. So can imagine that. I mean, what I often tell, what I often say that’s, so, I mean just an idea, otherwise, if you don’t think, unless those who have realization of the lower realm sufferings, of course, no question, you see, or those who have been meditating, you have some feeling, unimaginable feeling, then, no question. But, otherwise, it becomes just words, the lower realms, when we talk about their suffering, it just becomes words, no feeling in the heart. No feelings of others’ suffering. Even as compassion, no feeling of their suffering and no feeling, as a result of your karma, no feeling, two things. So if we didn’t meditate or if the mind is not compassionate nature, then there’s no feeling. So, like that, you see.

So, as I often say that, [pause] that all the human beings’, the fire, power of the fire, put together, you see, say, compared to the fire at the end of the world, end of the world where rocky mountains get melted, like when the lava comes, or the liquid oneness with the fire, when the lava comes and those rocks get melted, it’s much, much, so much hotter than, it’s liquid, but, liquid, still there’s liquid but it melts the rocks. You see, you see, I have seen in Hawaii. From the center, there was a center before, so I went from, it’s called Shantideva, it was called Shantideva Center, so maybe existing now, maybe still existing, but there’s no base. Maybe, you can have the label, but without base. I’m joking. So, now the Shantideva Center is in New York. There’s a base, New York.

So, anyway, what I’m saying. So the liquid, but still it melts the rocks, I have seen Hawaii, from the, went from the center to see the lava; it’s unbelievable hot. Even you don’t go very near, there, where she is, where ?Merry is there, so it’s so hot. Very, very hot, so that’s kind of like, so that you see here in the human world. Not everywhere, but certain places.

So, the end of the world fire melts even rocky mountains, so that, six or seven times hotter, then the present human fire.

Now the, one tiny fire spark from hell, one tiny fire spark from hell is six or seven times hotter than the end of the world fire. One tiny fire spark from there is much hotter then the unbelievable blazing fire which melts even rocky mountains, oh, six or seven times hotter, than the, the tiny fire from the hot hell, it’s seven times much more hotter than the blazing, hts, what do you call? Comprehension? No. Huge. So that huge, blazing hot fire at the end of the world that which melts rocky, even the rocky mountains, like that, burns everything. So how hot it is, like that. Even one tiny fire spark. So like this. So the rest, how, most unbearable it is, no need to say, no question, just thinking of that, the result of negative karma. Okay, like this. So, so can you imagine, so therefore, actually being in the hot hell, can you imagine, in the place oneness with the fire, the ground, can imagine.

So, like the ground, the [Tibetan] the whole ground is like swords, swords like this [showing] side, you see, up. Swords, ?over the whole ground. So if we step, it cuts. Until you finish your karma, it’s like that, you know, cuts continuously. So anyway, that is still not the main hell; that’s the branches. There are six or seven secondary hells.

So then cold. Can you imagine, if it’s like that, also cold will be similar.

So, it is mentioned by Nagarjuna in Jewel Garland, every day one should remember, every day one should remember the hot and cold sufferings of the hell realm. Then, if you do that, then, the human beings’ hot and cold sufferings, their problems, not a problem. It’s nothing, I mean, it’s comfort, it’s nothing for one’s own mind. So then cannot bear, so you can bear, then they cannot disturb your practice; it doesn’t become obstacle for your practice. You’re able to bear the hardships, the hardships, I mean, say, hot and cold in human world. I mean, that’s just an example, but any other rest of the problems, it’s no longer a problem when you think of lower realms, when you think of other realms’ suffering, which is much, much, much, most unbearable. So this becomes pleasure. So it doesn’t bother your mind. So you’re able to continue your practice, you’re able to practice continuously. So like that. So this is what Nagarjuna is saying, like that. Then one is able to achieve realizations, able to have success in this life, the lam-rim, renunciation, bodhicitta, right view, lam-rim, and then the, cause vehicle, then result vehicle, tantra, two stages, so one is able to achieve without taking much time, without taking so many lifetimes, able to have those realizations.

For example, when we rush, when we’re very busy, when we rush, you need to get there on time, so then, even though it’s very short time, even though it takes five minutes, but it looks like it takes ten minutes, because you’re in a rush to arrive that time, you see, very quickly. But then, even other times, when you’re not busy, other times, it’s short. But then when you’re very busy, you see, need to arrive there very quickly then, even though it’s the same time, but for your mind, it looks very long. Do you understand what I’m saying? Huh? I experience like that. So anyway, so, I experience like that many times. So anyway, like that.

So therefore, can you imagine, you are free from that one negative karma, result, there are four sufferings results, but you’re free from one, that rebirth in the lower realms. Can you imagine? Free. You don’t have to suffer.

The length of life, the first hot hell, Being Alive Again and Again, according to human beings, approximately six ter bum, and two great ter bum, and one great trag trig. Something like that, anyway, say, but, I think I have written but the numbers, my memory is not very good, so I always get mixed up. One great trag trig, two great, yes, that’s right, not six great, not six ter bum, that I made a mistake. Six trag trig. Six trag trig, length of life, six trag trig, okay. And then the, six trag trig, and then, [pause] put it this way. I will repeat again. I will repeat over. You don’t count the previous one, okay. Cancel it, or erase it with a duster. Okay.

Then, next, hell realm is Black Line, then double, the life is double, longer. So goes on. Similar, the suffering is heavier, double, how the experience of the hot suffering there becomes double than the first one. So everything becomes unimaginable, double, triple, like that.

So therefore, so can you imagine, so that is the length of life of the first hot hell, Being Alive Again and Again. So can you imagine that, to be free, you don’t have to be reborn in the lower realms, the ripening aspect result of that sexual misconduct, that one negative karma of sexual misconduct, four suffering results, okay, the ripening aspect result: rebirth in the lower realm, in the hell realm, you don’t have to suffer. It’s amazing.

So, you see, I told you, this one, that soccer player, all the people who are in the Olympics, nothing, that’s nothing. It is nothing. This is for some reputation. Some reputation. I don’t know, some years, some months, some weeks, some days, that’s it, just, then, of course, they ?will ?be ?known many other people. Anyway, so anyway, that’s nothing. So this, can you imagine? Just this one. If you think well, if you really think well, your achievement, your achievement, if you really think well, think deep, it’s really amazing. What it means, free from the lower, free from the, this result of one negative karma, even a negative karma, you see, many sexual misconduct, but just one. And free from, that has four, that complete negative karma has four suffering results, just free, you don’t have to suffer, you don’t have to be born in lower realms, that one. Can you imagine, what that is, what it means to you, just most amazing. That’s something you can breathe, when you think of this. You don’t have to experience, something it makes you, can breathe. I mean, you know, some heavy problem, you can’t breathe, you know some very heavy problem, you know, then it’s gone. Now you don’t have, [pause] like something, you did something wrong, and then you’re going to be executed or something, you see, for example, or lose everything, or something, you see, so now that’s not going to happen. Oh, then now you can breathe, you see.

So what I’m saying is, one OM MANI PADME HUM, one time, or one prayer or meditation that you will do here, purify, so I’m saying. If you really think well, it’s just amazing.