Rinjung Gyatsa is a collection of deities from all four classes of tantra, compiled in the sixteenth century by the Tibetan master Lama Taranatha. The attached Rinjung Gyatsa PDF presents a list of jenangs or oral transmissions given by Lama Zopa Rinpoche in Bodhgaya, India, in 1982, as part of the First Enlightened Experience Celebration (EEC1), and at Kopan Monastery, Nepal, in 1985, as part of the Second Enlightened Experience Celebration (EEC2). Compiled and edited by Hermes Brandt, June 2022. 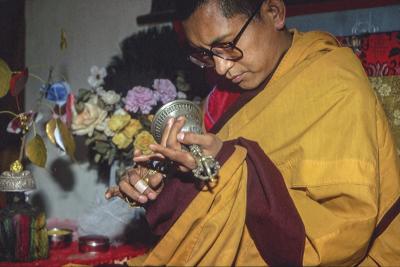 This Rinjung Gyatsa text, compiled and edited by Hermes Brandt in June 2022, is based on Rinjung Gyatsa (EECI, Wisdom Publications, London, 1983) and The Precious Source of Attainment of the Ocean of Mind-Bound Deities (EEC2, November 1985).

The dates and qualifications of the oral transmissions, as well as some comments from Lama Zopa Rinpoche, were added from notes that the editor, Hermes Brandt, took during the initiations. Footnotes and an image were added by the editor, who also changed the translation of some names and corrected some of the incorrect Tibetan transliterations. Edited for the editor’s personal use, in the hope it might also be useful to others. Some mantras are included, however, most are not yet checked against the Tibetan original.

The original text, The Precious Source of Sadhanas of the Ocean of Meditational Deities (yi dam rgya mtsho'i sgrub thabs rin chen 'byung gnas) was compiled by Lama Taranatha (1575-1635 approx.), a member of the Jonang school of Tibetan Buddhism, in the sixteenth century.1 As transmitted by lineage lamas it contains the sadhanas (means of attainment) of 305 deities from the four classes of tantra and the various Buddhist traditions, such as Nyingma, Sakya and Kagyü, together with the methods of initiating disciples into their practice. Lama Thubten Zopa Rinpoche received the oral transmission of this text from the late Tsenshab Serkong Rinpoche at Kopan Monastery, Nepal, in the summers of 1977 and 1978.

See also the excellent work by Martin Willson and Martin Brauen on all these and other deities, including sadhanas and images: Deities of Tibetan Buddhism (Somerville MA: Wisdom Publications, 2000).

1 The fifth Dalai Lama and Gelug followers suppressed the Jonang school in the late seventeenth century, however, the lineage has survived and Jonang as a living tradition is studied and practiced up to the present day. Read more about the Jonang tradition here. [Return to text]