The first Enlightened Experience Celebration (EEC1) was held in India from January to June 1982, and was hosted by International Mahayana Institute. Click on the links to access teachings from EEC1 and other EEC1 events.

The EEC1 Report contains advice from His Holiness Ling Rinpoche, a summary of the EEC1 program and a Tara practice composed by Lama Zopa Rinpoche. Read an introduction to the report by EEC1 director Nicholas Ribush. 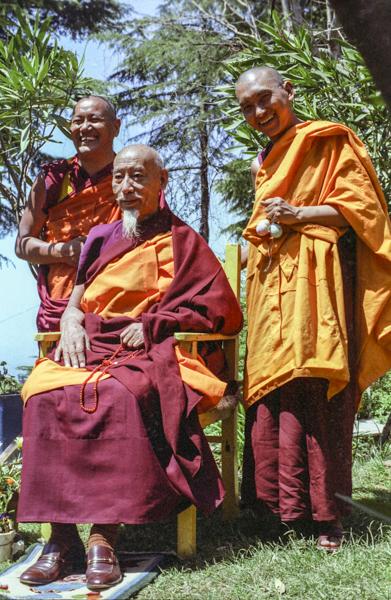 The EEC1 Report contains advice from His Holiness Ling Rinpoche, a summary of the EEC1 program and a Tara practice by Lama Zopa Rinpoche.

A Note on this Report

At first this was going to be simply what has now become Part 2. But, inspired by the incomparable Lama Thubten Zopa Rinpoche, I have decided to include more, to make the report both more interesting and more beneficial.

Part 1 is a talk by His Holiness Ling Rinpoche, given during the Enlightened Experience Celebration, which Lama Zopa thought particularly stimulating. Here His Holiness, as well as offering profound, quintessential instructions for personal practice, extols the virtues of spreading Dharma in the West and developing centers to facilitate this. Since that is what the FPMT and Enlightened Experience Celebrations are largely all about, His Holiness’s advice is highly relevant. At the end of his talk, His Holiness asked us to pray for success in this work.

A short time after the Celebration finished, Lama Zopa put together a practice for the benefit of all sentient beings in general and for the FPMT and its students in particular. Since this made a natural addition to the teachings of His Holiness Ling Rinpoche, it is included here, with Lama Zopa’s commentary. It would be an excellent way for centers to start the day. With this hope, it is reproduced as Part 3 of this report.

Teachings by Lama Yeshe and Lama Zopa Rinpoche at EEC1

Mahamudra Q & A With Lama Yeshe: A question and answer session held at the Bhagsu Hotel in Dharamsala, India, in March 1982.

Lama Yeshe's Farewell Teaching at EEC1: This teaching is excerpted from Lama Yeshe's final address to students at EEC1, at Tushita Retreat Centre in Dharamsala, India, on April 28, 1982. Watch a video of this teaching on the LYWA Youtube channel.

The Kindness of the Guru: Lama Zopa Rinpoche gave this teaching to the monks and nuns of the IMI (International Mahayana Institute, the Sangha of the FPMT) at Tushita Meditation Centre, Dharamsala, India, in May 1982.

A Tara Puja and Commentary: This text was composed by Lama Zopa Rinpoche in July 1982 for the success of all FPMT centers and activities.

Rinjung Gyatsa: This text presents a list of the oral transmissions given by Lama Zopa Rinpoche in Bodhgaya, India, in 1982 and at Kopan Monastery, Nepal, in 1985. The original text was compiled by Lama Taranatha (1575-1635 approx.), a member of the Jonang school of Tibetan Buddhism, in the sixteenth century. As transmitted by lineage lamas, it contains the sadhanas (means of attainment) of 305 deities from the four classes of tantra and the various Buddhist traditions, together with the methods of initiating disciples into their practice. Compiled and edited by Hermes Brandt, June 2022.

Click on the links below to watch videos from EEC1.

Entertainment Offering at the Enlightenment Experience Celebration: This video depicts a student performance offered to Lama Yeshe at the end of his final teaching at EEC1 on April 28, 1982. Cat Wilson on guitar and vocals sings "Don't Know Much About Emptiness" to the tune of a contemporary song, while Paula Nyingje Chichester (in black) and Mo Wilke (in red) dramatically enact aspects of the teachings. You can also download a PDF of the song lyrics.