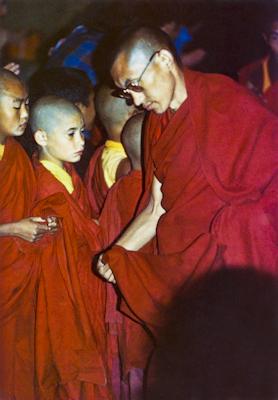 Question: Do you have to believe in reincarnation to attain enlightenment?

Lama Zopa Rinpoche: Forget about belief; it’s impossible to attain enlightenment without realizing the fact of reincarnation, or rebirth.

In the East, in the West, black, white, yellow, in whatever kind of body we find ourselves, most of us were born without choice, without freedom. There’s a reason that we have to experience rebirth without choice, a life without freedom. First of all, this lack of control of our rebirth itself is what the Buddha meant by suffering; similarly, death without control is also suffering. So, the suffering of uncontrolled rebirth and death has a cause, and the cause was created before this life began. The result—uncontrolled suffering rebirth and death—and their principal cause can’t be born together any more than a mother and her child can be born together.

Question: Is it karma?

Lama Zopa Rinpoche: Yes, it’s karma, and this principal cause, this karma, was created before; not necessarily in the immediately preceding life but possibly over many lifetimes.

Therefore, an understanding of beginningless mind and reincarnation is fundamental to the discovery of the nature of problems and of the utmost need in preparing your mind for spiritual realizations.

But it’s not a question of believing in reincarnation; it’s a question of investigating reality to see whether or not it exists. That’s the most important thing: trying to see clearly whether it exists or not.

If past and future lives are actual objects of existence, it’s nonsensical for you to try not to believe in them. It’s like looking at your car, which is parked right over there, and trying to believe it’s not there. All you’re doing is making yourself more ignorant. It’s like covering your eyes in order not to see something that exists. It just limits your own understanding.

Ignorance is the mind that does not perceive objects that really exist. This is the connotation of the term “ignorance” to Tibetan lamas, the great Indian pandits and Guru Shakyamuni Buddha himself. And ignorance is the main obstacle to the attainment of enlightenment.

Enlightenment means omniscient mind, the fully-knowing mind; a state of mind that fully sees every single thing that exists—all noumenal and phenomenal existence—and completely realizes every past, present and future thing and event, without missing even an atom. This completely purified state of omniscient mind is what is meant by enlightenment.

What’s the purpose of gaining such a state of mind? It’s not for yourself but for you to be able to bring all living beings to the state of everlasting happiness by showing them all the different paths and methods according to what suits their various levels of mind, with complete, unobstructed understanding of all their thoughts and desires.

If there were no past and future lives, there would be no karma. What is karma? Karma is any action of body, speech and mind; it’s that which creates a relationship between cause and effect, that which brings effect from cause. In other words, it’s karma that causes us to circle through cyclic existence.

If life had a beginning, karma would also have a beginning. Then it would be possible to experience the result of karma that you yourself had not created. But nothing can exist without being created; without a creator, how can creation exist? If this initial karma had been created not by oneself but by another, it would be possible, for example, for me to enjoy the pleasure of somebody else’s eating a delicious piece of steak; or for somebody else to travel to exotic places and for me to experience the pleasure of that.