Kyabje Lama Zopa Rinpoche gave this teaching on the eight Mahayana precepts, a set of vows that are taken before dawn and kept for 24 hours, at Kopan Course No. 16, held at Kopan Monastery, Nepal, in Nov-Dec 1983.

This is an excerpt from Lecture 35 of the course. Edited by Uldis Balodis; second edit by Sandra Smith, Dec 2012. 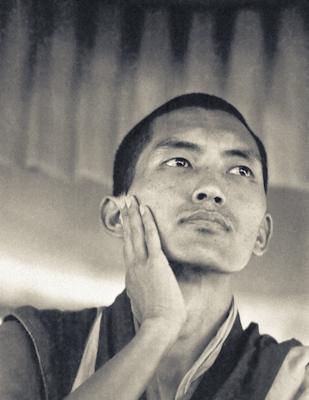 By taking this ordination for just one hour or even for 15 minutes, we purify negative karma and restore virtue. Putting it another way, we purify vices that have been received by degenerating vows and we revive the vows, tek.chen so.jong. This revival and purification by Mahayana ordination has greater merit than we would accumulate in eons by other practices.

As I often say during courses, there’s not one single happiness or perfection that we receive without depending on the kindness of other sentient beings. There is not one single perfection received without sentient beings having suffered. This rice that we are eating today came from the fields, which were fertilized and ploughed. During those times so many creatures in the ground—so many ants, mice and worms—were killed. So many beings had to die and to suffer each time this work was done. There are many stages in order to get the fruit. After the seedlings are grown they have to be replanted, then there is weeding and many jobs at different times as the plants are growing. Each time, so many creatures have to die or suffer.

In the West this work is mostly done by people with machines, but here in the East it is mostly done by animals. The buffaloes and other animals get beaten so much by people who are ploughing the land. Human beings and animals work so hard, experiencing heat and cold. They are burned by the sun and experience much tiredness. Sentient beings create negative karma by killing others just for this one serving of rice. So many sentient beings have to die or suffer for this meal of rice.

This rice came from other rice, other seeds, and the same thing happened for that—so many sentient beings had to suffer or die, and others had to accumulate negative karma. That rice came from another rice and again it was the same thing. If you think back, it’s unbelievable—this rice came from previous rice, that rice came from previous rice and so on. By thinking about the continuity of even this one meal of rice you can see that an unbelievable number of sentient beings accumulated negative karma and so many others suffered and died. For one plate of rice uncountable sentient beings suffered and had to die, and created much negative karma. When we think about this, it is unbearable to eat even one plate of rice unconsciously without the thought to benefit at least those who suffered to provide this, if not all the sentient beings. We dare not put even one spoonful of rice easily in our mouth without making some determination to do something for them, to benefit them. To eat one mouthful of rice without the slightest concern for offering benefit to others, with only the selfish attitude concerned with our own happiness, is very unsuitable, very upsetting.

Meditate like this: consider yourself as “others” and think about those who suffered and created much negative karma as “yourself.” Then look at your old self, who eats this rice only for the happiness of himself, and think, “He is eating this rice which came from me, for which I created much negative karma and went through much hardship and suffering. He is eating it for his own happiness without one single thought of concern for me.” Look at it this way, from the point of view of yourself as those other beings. It is very painful and upsetting if you think in this way.

It is similar for even one piece of vegetable—so many beings suffered and created negative karma, even for one cup of tea or one mouthful of water when we are thirsty. There are many tiny creatures in the water that we cannot see with our eyes, but we can see with a microscope. When we enjoy the water, they die—when it is boiled or when we drink it. So there is no way to have the pleasure of even a mouthful of water or one plate of rice, one bowl of soup, or one vegetable, without harming other sentient beings and creating negative karma. Even by just thinking about our food and how it came from sentient beings, we cannot spend our life completely working for our own happiness. We have to do something, to think and plan to benefit them. We can’t relax. We can’t be satisfied by thinking, “If I am happy, not sick, that’s enough.”

It’s the same thing with our house. In order to have the comfort of living in a house protected from rain, the heat of the sun and danger, so many human beings created negative karma by killing others, and so many other creatures suffered much injury or died. So much of the clothing that we wear is taken by force from the bodies of animals. For example, silk comes from silk worms which are controlled by human beings and killed in hot water or whatever. We take by force the things which keep animals warm, like the hair of their body, for our own happiness and comfort. Many sentient beings, including human beings, suffered in order for us to have clothing. Think of the whole process—in the beginning those creatures suffered so much and human beings experienced great hardship to make the clothes. Even if the cloth is made by machines, human beings put much effort into making the machines. Some people bought the cloth from others, made a shop, tailored the clothes and so on. Everything is made by sentient beings so it is ready to wear and easy to get.

Every single comfort that we receive is from other sentient beings. Even this body that we have now, which has the opportunity to have more comfort than the lower realm beings, even without talking about Dharma, was given by our parents and is due to the karma they created to give it. If they hadn’t created the karma we would not have this human body. Some couples, no matter how much they want a child and try to have one, can’t have a child. We human beings are alive today and each day, due to the kindness of sentient beings. Being alive today, having the opportunity to practice Dharma, to listen to teachings, to accumulate merit by taking the eight Mahayana precepts, is completely given by the sentient beings. Therefore we cannot just relax all the time with the thought of only our own happiness, thinking, “When will I be free from this problem?” If we think of suffering, it is only our own suffering; if we think of happiness, it is only our own happiness. Now we have to do something to benefit at least those sentient beings who are kind now and from whom we receive the present comforts and happiness, if not all sentient beings, who are kind in past and future lives.

What is needed is to free sentient beings from true suffering and the true cause of suffering, so they have ultimate happiness. This is the best way to benefit them. To complete that work there is no method except practicing Dharma and achieving enlightenment. Therefore, think, “Today I must achieve enlightenment for the sake of all these kind sentient beings; therefore I’m going to take Mahayana ordination.”

If the precepts are not degenerated from now until sunrise tomorrow, every single merit that we create will be much more powerful because, as it was mentioned in the teachings, there is a big difference between living in and not living in the precepts. Whatever prayer is made will definitely be accomplished. Feel great joy in this. Think, “How fortunate I am.”

Also, by knowing the benefits as taught this morning, you should think, “Today might be my last day of living in the precepts, so while I am living in the precepts I’m going to accumulate merit as much as possible.” Like the business person who is in a country where there is a lot of profit to be made, and who tries to buy or sell as much as possible; like this, make as much profit of merit as possible by living in ordination for one day. This is the action of a really wise person. In business, even if there is material profit, that itself is not the cause of happiness. The profit of merit is completely the opposite—it is abandoning negative karma.

Think, “As I have taken these eight precepts, I’m going to keep them until sunrise tomorrow in order to free each sentient being from suffering and to lead them to enlightenment.”