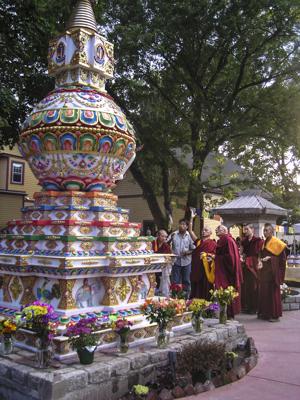 The following titles have been translated into Tibetan:

The Perfect Human Rebirth: Freedom and Richness on the Path to Enlightenment, by Lama Zopa Rinpoche. Translated by Tenzin Rigsang. In this book, Rinpoche explains in the greatest possible detail just how precious this opportunity is and why we should not waste a moment of it. We have received not only a human rebirth but a perfect human rebirth, which gives us every opportunity to practice Dharma to the fullest possible extent.

How to Practice the Buddhadharma, by Ven. Geshe Tsulga. In this book, the highly learned and revered teacher Geshe Tsulga offers a concise explanation of how to put the Buddha's teachings into practice, with emphasis on the early stages of the path and guru devotion. Ven. Geshe Tsulga (Ven. Tsultrim Choephel) was resident teacher was resident teacher at Kurukulla Center for Tibetan Buddhist Studies in Boston, MA. He passed away in November 2010. Geshe-la's book How to Practice the Buddhadharma is due to be published by Wisdom Publications in a combined English-Tibetan edition.

How to Practice the Buddhadharma