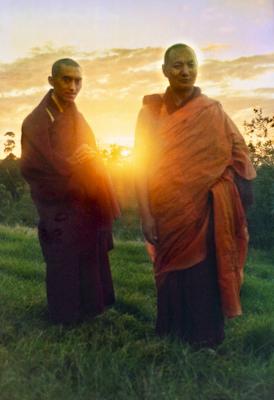 How to Find Our Real Potential. Tenzin Ösel Hita gave this talk at the Center for Wisdom and Compassion in Copenhagen, Denmark on February 11, 2017. It has been translated into Spanish by a team of translators coordinated by Paloma Fernandez Garcia, FPMT National Coordinator of Spain. Translators: Isabel Arocena, Pilar Páramo, Carola Garcia, Ana Julia Saavedra, Virginia Segura, Beatriz Espinosa and Francisco Llopis. The talk is also available as a LYWA podcast or you can watch the video on YouTube.

Adapting Positively to Any Circumstance. Tenzin Ösel Hita gave this talk at Institut Vajra Yogini, France on February 19, 2017. It has been translated by Amaia Zabala. You can also watch the video on YouTube.

The following teachings by Lama Yeshe and Lama Zopa Rinpoche have now been translated into Spanish by Felipe Ángel, Centro Yamantaka, FPMT Colombia.

Ediciones Dharma has translated the following three LYWA books into Spanish. Note that these titles are only available as pdf files that can be downloaded from their free books page:

The following DVD has been translated into Spanish by Ediciones Dharma:

The Eight Places of Buddhist Pilgrimage by Jeremy Russell has been translated into Spanish by FPMT affiliate, Ediciones Mahayana, and is now available on our companion website Teachings for Tibet. This book describes the eight sites in northern India of special significance in the Buddha's life, and provides information and inspiration to pilgrims.