The Life of Atisha

Kyabje Lama Zopa Rinpoche explained Atisha's life and work at the 9th Kopan Course in 1976. This teaching is an edited excerpt from Lecture Six, Section Two of the course. Click here to read more. 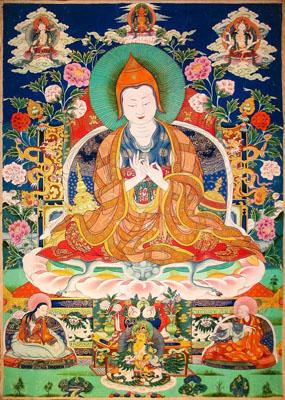 Having a little bit of understanding of the life story of Atisha is very beneficial for our mind, so we can try to understand the teaching he wrote. By understanding Atisha’s life story and how he practiced Dharma and achieved realizations, devotion arises and we can feel that his teaching is most precious and pure. 1

Actually it is a very long life story, and it is divided into three parts. In order to have some idea about the great bodhisattva Atisha and how he benefited sentient beings, there are stories about his birth, his home, his birthplace and his early life. The stories explain how he achieved great knowledge and realizations with that holy body. Then after achieving the knowledge and realizations of the path, he benefited the teachings and helped sentient beings— he led the disciples and sentient beings to happiness.

Atisha’s birthplace was in Bengal, India. He was born as a prince and his family was extremely wealthy. He was surrounded by servants and workers, and there were 100,000 people just in his palace. The palace had thirteen golden roofs and 25,000 golden banners on the top, and there were also many pools, like in the West. At the palace there were 25,000 pools and beautiful parks, gardens of beautiful flowers that people could enjoy, seven bridges, and special trees that only grow in India.

When Atisha was three, he became an expert in general education—in astrology, letters, the brahmas, these things. He also became expert in discriminating the inner and outer being, so his parents wanted him very badly to take the place of the king. They tried very hard, but after some time he left with 300 horses, disguised as an army going to fight.

Many people went into the forest with Atisha to seek the guru. He took many teachings on refuge and bodhicitta, and then the guru sent him home to check up and try to understand the suffering of life. This happened three times. He came back, the guru sent him to another guru, and that guru sent him home to check up on the shortcomings of worldly life. His parents tried very hard to have him marry and take the place of a king. They invited all the beautiful women of the country to a party, and let them all dance around, but it didn’t work.

Atisha followed 157 gurus perfectly and received many teachings, initiations and Vajrayana teachings. Once, while he was at home, Tara, the female aspect of Buddha, instructed him in a dream not to be attached to the samsaric happiness of worldly life. After this, Atisha went to see his guru. Then one day, after receiving many initiations, he thought, “There is no Vajrayana teaching left that I don’t know. I have become the most learned.” He felt a little bit of pride. That night, he had a dream that many female dakinis— transformations of buddhas who have high realizations of tantra—showed him many Vajrayana texts that he had never seen before. This made him lose his feelings of pride.

Atisha wanted to receive Mahamudra realization in his lifetime, by living in Vajrayana conduct. One of his gurus, Rahula, suddenly realized with his psychic power that Atisha was thinking this. Without any resistance, Rahula appeared in front of Atisha and instructed him, “What are you doing, forgetting all the sentient beings by leaving them? Take ordination and do great work for the teachings. This will be greatly beneficial for the teachings.” So, Atisha took ordination when he was twenty-nine years old. He was persuaded to do so by his guru and also by the buddha’s female aspect, Tara, Guru Shakyamuni Buddha, Maitreya Buddha and many other buddhas and Vajrayana deities such as Heruka, in his dreams.

After some time, when he was going around the Bodhgaya stupa—the temple in India, the most holy place where Guru Shakyamuni Buddha received enlightenment— above the stupa, in space, he saw the transformation of a young woman asking an old woman a question. At that time Atisha was concerned with quickly receiving enlightenment, and in space the young woman was asking the old woman, “What path should we practice in order to quickly receive enlightenment?” The old woman said, “Train the mind in love and compassion, in bodhicitta."

Again, when Atisha was going around the stupa, there were paintings on the walls that talked to each other. One painting asked the other what path we should follow to reach enlightenment quickly, and the other answered, “Train the mind in love and compassion, and bodhicitta.”

Again, when Atisha was going around near Nagarjuna’s caves, he saw the statues of Buddha communicating, saying, “Train the mind in love and the compassionate thought, bodhicitta.” There was one ivory statue, and it said, “Yogi, if you want to quickly receive enlightenment, train the mind in love and compassion, and the thought of bodhicitta.” Many statues spoke like this.

Atisha went to see Guru Serlingpa, and he spent about twelve years taking the complete teachings on bodhicitta. In the presence of Guru Serlingpa, he received the actual realization of bodhicitta. Then Lama Serlingpa predicted that he should go to Tibet, the northern snow land.

At that time, there was a lot of degeneration of the teachings in Tibet. The people did not know how to practice the teachings, and they were confused about the practice of sutra and tantra together. The king of Tibet, Lha Lama Yeshe Ö, sent twenty-one boys to India to study Dharma and all of them except two died from the heat. These two came back to Tibet and told the king that everyone was talking about Atisha, the pandit, and that they should invite him to Tibet to help. These two translators’ names were Rinchen Zangpo and Legpai Sherab.

As soon as Lha Lama Yeshe Ö, the king of Tibet, heard the name of Atisha, incredible devotion arose in his mind, and he decided to invite Atisha to Tibet. He sent many gold offerings to India to invite Atisha, but it didn’t work. Then afterwards, he went himself to find gold for Atisha, and he was captured and put in the prison by an irreligious king who didn’t want the spread of Dharma in Tibet.

King Lha Lama Yeshe Ö’s nephew, Jangchub Ö, came to see him in prison. The irreligious king told Jangchub Ö, “I won’t free your uncle until you find gold the size of his body.” So, Jangchub Ö found enough gold to reach up to his neck, but still the irreligious king was not satisfied. He said, “If you don’t bring gold the size of his head, I won’t let him be free from prison.” Again, Jangchub Ö went to his uncle, the king of Tibet, and explained all these things.

The imprisoned king of Tibet, Lha Lama Yeshe Ö, explained to his nephew that since a lot of gold was offered to the irreligious king and he was still not satisfied, Jangchub Ö should not offer this king even one handful of gold. King Lha Lama Yeshe Ö said he was now very old and did not have long to live, and it would be more beneficial for his nephew, Jangchub Ö, to take the gold. He said to Jangchub Ö, “I don’t care if I die in prison. Take all this gold and ask Atisha to come to Tibet and spread the Dharma.” Then the king sent a message to Atisha through his nephew, saying, “I gave up my life to invite you to Tibet. Please guide me with your compassion. What I have in my mind is only for you to come to Tibet and spread the teachings.”

The imprisoned king sent the message with Jangchub Ö with a suffering, frantic voice, and then he passed away in prison. His nephew sent a translator with many gold offerings to invite Atisha, but the kings and abbots of India wanted Atisha to stay there. Finally, Atisha received permission and he came secretly to Tibet and helped spread the Dharma there. According to his teachings, he wrote the Lamp for the Path to Enlightenment there.

Atisha spread the pure Mahayana teaching like the rising sun, and all conflict, ignorance, and wrong conceptions were destroyed. His text was translated into English by some Tibetan lamas and other translators. I am reading the translation of this teaching because it is extremely beneficial. It is so short. Atisha did great work and brought so much benefit to India and Tibet. In India he destroyed many followers of other religions, wrong paths and wrong conceptions. He did great work.

These days, many young people from the West have the chance to hear the teachings and to understand and practice these meditations on the gradual path to enlightenment. They can find satisfaction in their lives, and they can make their lives meaningful and happy. They integrate it in their own mind, and they understand that there is a chance to make their lives meaningful. All these things are due to the kindness of Atisha, the great bodhisattva.

This great bodhisattva, Atisha, lived in discipline, and had the realization of moral conduct. He kept the 253 precepts purely, and on the basis of that, the bodhisattva’s precepts, the moral conduct precepts and the Vajrayana precepts. He had unshakeable, firm, one-pointed concentration that could last for years—even if hundreds of rockets were flying nearby they couldn’t disturb or shake his meditation. He had perfect realization of shunyata, the absolute nature, and he achieved high tantric realizations, seeing himself in the form of deities.

Atisha had high tantric realization without projections, and he did not see ordinary places—we see an ordinary house built of mud or cement, an impure place, but Atisha had only pure projections and pure view, and he always saw the view of the mandala of the deities. He had high Vajrayana realizations and he was able to transform even kaka into nectar and poison into medicine.

We can meditate like this to increase devotion to Atisha’s teachings. We can do checking meditation according to that. We may find it difficult at the beginning of the subject, and it may take time to understand, but by checking and understanding more and more the various meditations and teachings, gradually it will become clear within our mind.

The Lineage of the Teachings
What is Dharma Practice?
Relying on the Guru
Happiness Comes from the Mind
Remembering Impermanence and Death
Making Space With Bodhicitta
Kopan Course No. 09 (1976)
Muara Jambi: Where Atisha Studied in Indonesia
Atisha: A Biography of the Renowned Buddhist Sage