These teachings were given by Lama Zopa Rinpoche at the Sixth Kopan Meditation Course in March-April 1974. The teachings form a commentary on the course text, The Wish-fulfilling Golden Sun of the Mahayana Thought Training. First published by the students of the International Mahayana Institute, a community of Western Sangha established in 1973.

You can download the entire contents of these teachings in a PDF file. His Holiness Zong Rinpoche visited Kopan during the Sixth Kopan Course and gave a talk, now published on our Teachings from Tibet blog. 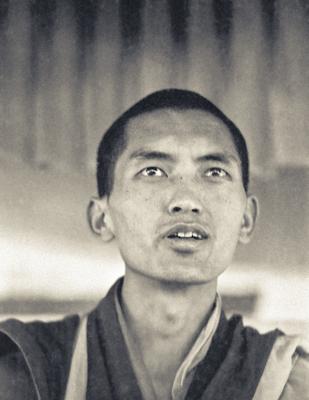 These notes are a literal trancription of the teachings given by Lama Zopa Rinpoche at the Sixth Meditation Course and form a commentary on the course text The Wish-fulfilling Golden Sun of the Mahayana Thought Training. When Rinpoche read directly from the textbook it is not recorded here. These notes are his comments and explanations given during the reading.

The notes were taken in shorthand but there may be a few minor omissions. Also, it is likely that there are some errors because of hearing incorrectly. Furthermore, in punctuating the text it is inevitable that some gross distortions of the original meaning have occurred as a result of the complete lack of Dharma understanding in those responsible. The compilers apologize for all this and ask the forgiveness of the holy Guru through whose infinite kindness the text appears. Yet they hope that it may be of great benefit to all mother sentient beings, representing, as it does, the holy speech of our precious teacher, Lama Zopa Rinpoche, whose oral teachings are those of Guru Shakyamuni Buddha himself, coming down through an unbroken lineage of gurus.

May Lama Zopa Rinpoche live a long life, actively expounding the holy Dharma in this oral tradition, for the sole purpose of enlightening sentient beings. May his disciples please him by following perfectly his instructions and quickly realize the essence of the teachings of the graduated path.

The page numbers referred to herein relate to the work copy of The Wish-fulfilling Golden Sun used at the Fifth (Nov-Dec 1973) and Sixth (Mar-Apr 1974) Meditation Courses. These talks generally follow the table of contents of the first half of The Wish-fulfilling Golden Sun. Therefore, we have used that outline to organize the contents of these teachings.

Appendix One contains the ordination ceremony taken on each of the last fourteen days of the course. The ceremony is presented here in a comprehensive form so that those who wish to may take this daily ordination themselves.

His Holiness Zong Rinpoche came to stay at Kopan Monastery for a few days during the Sixth Meditation Course. He gave a talk to almost two hundred Western students on April 17, 1974. It was translated by Lama Thubten Yeshe and edited by Nicholas Ribush. You can read this teaching on our Teachings From Tibet blog.

This text was published by the students of the International Mahayana Institute, an organization of Western monks and nuns dedicated to learning and teaching Guru Shakyamuni's holy Dharma for the benefit of all beings. We are most grateful to Sally Walter, who recorded Rinpoche's teachings in shorthand and typed the first draft from this, and to Pam Cowan, who typed the stencils.

Meditation One: Part I: The Perfect Human Rebirth (Part A)

Meditation One: Part I: The Perfect Human Rebirth (Part B)

Meditation One: Part I: The Perfect Human Rebirth (Part C)

Meditation One: Part I: The Perfect Human Rebirth (Part D)

Refuge (Part B) and Karma

NOTE: Rinpoche then gave a quick summary of the remainder of the text.

Appendix One: The Mahayana Ordination Ceremony