Kyabje Lama Zopa Rinpoche gave this Dharma talk prior to a refuge ceremony at Amitabha Buddhist Centre, Singapore, on January 18, 2009.

Rinpoche discusses the kindness of His Holiness the Dalai Lama in taking responsibility for preserving and spreading the Buddhadharma. Other topics in this teaching include the kindness of all sentient beings, the benefits of offering, and how the center helps with Dharma practice. 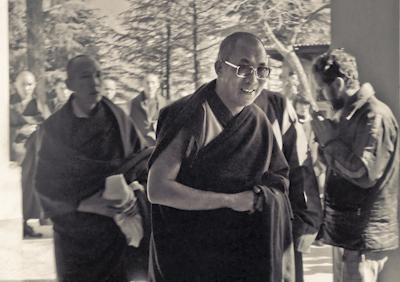 The Kindness of His Holiness the Dalai Lama

...end of the Heart Sutra, the reason why I added this extra the, very powerful dispelling the obstacles. So here, I think it’s very good to recite this, at the center, as a group it’s more powerful and even individually, when you recite Heart Sutra it’s good to do that.

So here, go refuge to the guru, Buddha, Dharma, Sangha, then the, in the past, used the example, Indra, by meditating on the Prajnaparamita, the words and meanings, and then, the profound meaning of the words, meanings of the Prajnaparamita, and then, dispelled the obstacles. So, similar, so, here, us, the disciples, the spiritual masters, and also then, by remembering the, reflecting the profound meaning of the Prajnaparamita, as well as the words, then, the bad thoughts, the human beings, non-human beings, bad thoughts, and the violent, the harmful actions, then to be dispelled. So here, what you can think, or what includes is His Holiness the Dalai Lama, the first thing, then the center here, then yourself. So any obstacles, so the harms, or any obstacles, others’ bad thoughts, harmful actions to be pacified.

So I think, yeah, first His Holiness the Dalai Lama, so who is the, who preserve the whole entire Buddhadharma, you know, Lesser Vehicle teachings, and the Great Vehicle teachings, Mahayana teachings, the sutra, and then Mahayana teaching, the Secret Mantra Vajrayana. So, on this earth, in this world, His Holiness the Dalai Lama is the only one who preserve the whole entire Buddhadharma revealed by Buddha, who take full responsibility in the spread, preserve and spread.

So all those countries, in Tibet called ?mong po ling, the Land of the Darkness, the ignorance, the Land of Darkness, not darkness of Western education, but darkness of Dharma, not darkness of Western education, the technology, or the science, but, the real light of Dharma, towards liberation, towards enlightenment, bringing, turning the life towards samsara to the liberation, towards enlightenment, so like that, to where there’s great light, turn towards that, instead of towards darkness.

So if that happened, then all this, all these large monasteries, then able to preserve, I mean, ?studied the extensive learning Buddhadharma, all these monasteries, four traditions, spread Lama Tsongkhapa’s teachings, like this, Sera, Ganden, Drepung, all these, Tantric Colleges, so all this wouldn’t, so that, by now, wouldn’t exist.

Then what you can offer, so extensive, to numberless sentient beings, not only the happiness of this life, but happiness of future lives, all the coming future lives, to them, and liberation from samsara to them, enlightenment to them. So unbelievable what you can offer, so many ways you can benefit for sentient beings, so wouldn’t have this, our life wouldn’t be like this by now, if His Holiness didn’t come out of Tibet, and if His Holiness is not living in this world, or if His Holiness did not request to Pandit Nehru, Jawaharlal Nehru, you see.

So I’m just giving a little bit of the story, clarification how it’s not just praise but it’s a real thing, say, how everything dependent to His Holiness. His Holiness is the, so, root, I mean the root of all our happiness, up to enlightenment, this life happiness up to enlightenment, everything, and, including us and all sentient beings. So, it comes from the teachings of the Buddha, all us sentient beings’ happiness comes from the teaching of Buddha, so the teaching of the Buddha exist in this world, preserve, preserve completely and spread, so His Holiness is the main source who preserve, who spread the complete Buddhadharma.

So, there are many leaders of religions, I mean, even just talking Buddhism, many leaders, you know, the Lesser Vehicle religion, then, the Mahayana sutra, Mahayana tantra, then four Tibetan Buddhism, four Tibetan Mahayana traditions, all that. But, however, there’s no, there’s no others like His Holiness, who takes full responsibility and who able to preserve and spread the entire Buddhadharma, the extensive sutra, and extensive tantra, so, the four classes of tantra, so like that. So I think, actually the Buddhadharma existing now in this world, flourishing, is because of His Holiness, it’s because, so extensively flourishing sutra and tantra, complete Buddhadharma, that.

So the sentient beings, therefore the sentient beings in this world, we have unbelievable, including us, unbelievable, unbelievable opportunity, unbelievable opportunity, to learn, to learn continuously as much as one can, so much what you can learn, and then, integrate into lam-rim, integrate into the heart, the lam-rim, and then actualize, the three principles of the path, and then the, your own deity, tantric, your own deity, tantric deity’s, the path, the heart, say, the heart of the tantra, so like that, integrating into this, then able to achieve enlightenment, so that, able to take essence, meaning in the life, meaning in your life, and benefit such extensive way to sentient beings, that.

So anyway, so what I’m saying here, so this prayer is very important, so we have responsibility to pray for His Holiness, to say, we have great responsibility to pray for His Holiness. So when we do protector prayers or whatever prayer, the very first thing, the very first, the very first thing, the very first thing, say, oh, yes, one has family members, one has many, many things, but overall, the most important thing, including yourself, for sentient beings, is His Holiness the Dalai Lama to have long life and holy wishes to be succeed, that’s the first thing, the very first thing to pray is that one. You know, whatever prayer you do, protector prayer or whatever prayer you do, that’s the first thing to do, that’s the first thing, which helps everybody, helps you, it helps yourself. We can tell the story up to now, up to now, the benefit what you’ve got, how many years one has learned Dharma, or the, you know, come to the center, such and such as ABC, like that, you see, the, have done that much practice, various practices, and however, purified so much negative karma, each time when you come to the center, so, you see, by meditating on bodhicitta or however, meditating on emptiness or renunciation, or reciting Thirty-five Buddhas’ names, or the, Vajrasattva, whatever it is, so many, by reciting Thirty-five Buddhas’ name, just once, so many eons of negative karma is purified, just reciting one time the name, one name; Thirty-five Buddhas, it’s just one of the Buddha’s names, so many eons of negative karma is purified.

And then, De zhin sheg pa me tog pal la chhag tshal lo, "I prostrate to the Glorified Flower Buddha," it purifies, by reciting the name one time, it has the power to purify 100,000 eons of negative karma, reciting that name just once. So then, others, many, many eons of negative karma get purified, just coming here, doing prostration, or however, reciting, so I mean, whatever practice you do, so just unimaginable, unimaginable, unimaginable benefit what you get, can imagine.

So this, I mean this is without, this is just, yeah, immediately doing those practices, this is without talking many other powerful things like self-initiation, or many other things, many practices, without talking that, just immediate thing what you can do, see, whether who has received initiation or no initiation, but immediately, by coming to the center, you take care by yourself, doing these practices, what is led, what is done by group, what is led at the center. So, unbelievable benefit you get, unbelievable benefit.

So, what I was saying, up to now, your life up to now. So, beginning, before one met Dharma, say, coming to the center, knew nothing, so the, so, totally dark, mind is like a dark room, like the world where there’s no, say, no sun, anyway without sun, without moon, nothing, so, how it is totally dark, so like Greenland, Greenland? So six months there’s no light.

So, anyway, however, so then, then by coming here, by coming to the center, to learn, to learn, practice, in a group, so, so far, how many years, learnt a lot and did a lot, did unbelievable, unbelievable, unbelievable purification, so many negative karmas purified, so many obstacles to achieve realization, path to enlightenment, to achieve liberation and enlightenment, so much is purified, then collected extensive merits, limitless skies of merits every time, every time we begin a practice with bodhicitta, at the beginning, so this is without talking during the actual practice, but even just the beginning, with bodhicitta, so can you imagine.

So the, say, so very beginning, the, as mentioned in the Lamp of the Path to Enlightenment, referring to another sutra, or mentioned in the Tenth Bhumi Sutra, however, the, say, [pause] something like the great thousand of three thousand universes filled up with jewels, diamond, gold, silver, so forth, seven types of jewels, totally full, then you offer to the buddhas, okay, you offer to the buddhas. Then, that itself is, first of all, that itself is unimaginable merit, I mean how much merit you collect, can’t imagine, can’t imagine.

So, it is said that, sutra, Me tog tsek pai do, Me tog phung pai do, tsek pai do, The Sutra of the Pile, say, Piled Flowers, there mentioned that, so, if you offer one tiny flower, if you offer one tiny flower, I mean, it says, one flower, anyway, what it says, if you offer one flower, to the stupa, then, how much benefit it contains, the offering one flower to the stupa, so, happiness, so here, just pay attention, just listen here, so that you get some idea, see, in the daily life, why the offering, practice of offering is so important, to the Buddha, Dharma, Sangha, so you get some idea how it’s so important, the practice, the seven-limb practice, the offering, seven-limb practice, for say, to actualize the meditation on the path, lam-rim, the steps of the path to enlightenment to be successful, to have realization, to complete the path, to achieve enlightenment, to complete the path, to achieve enlightenment, how to be successful, by them you need to purify defilements and collect necessary condition, merits, so the, so, ?well, seven-limb practice, it’s most needed, so the one, from the seven, one of them is, say, the first one is, anyway, what I’m saying? The second one, first one prostration, second one is offering, so, second limb is offering.

So, as I mentioned yesterday, the circumambulation or prostration, offering, whatever, done these holy objects, by the power of holy object, even the motivation is not Dharma, they immediately become cause of enlightenment, cause of enlightenment, the peerless happiness, full enlightenment, cessation of all the, cessation of even the subtle mistakes of mind and completion of all the realizations, okay, so like that. So now, so that’s very common, that’s very common to mention, from very beginning of lam-rim, it is taught.

The Kindness of His Holiness the Dalai Lama, continued »
+ View All Teachings