Kyabje Lama Zopa Rinpoche gave this teaching about the life of Khunu Lama Tenzin Gyaltsen, at Kopan Course No. 43, held at Kopan Monastery, Nepal, in Nov-Dec, 2010.

This is an excerpt from Lecture Four of the course. Lightly edited by Gordon McDougall and Sandra Smith. 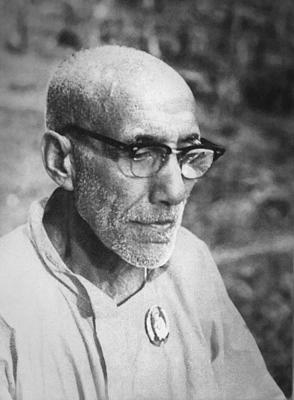 Kyabje Khunu Lama Rinpoche, the great bodhisattva, the great pandit, the great scholar, the unbelievable scholar, was from Ladakh in India. At a very young age he went to Tibet to learn Dharma and to receive the lineage of the teachings, the commentaries and oral transmissions, and also to learn poetry, grammar and a way of putting the Sanskrit letters together.

I’m not sure how to translate it, but there is a particular way of putting Sanskrit letters together that can only be learned from very learned teachers. At one time a teacher training school started in Mussoorie, India, not far from Dharamsala. All the abbots of the six monasteries were there—from Sera, Ganden and Drepung—these are the great monastic universities of Tibet that were later established in India by His Holiness for the monks who fled from Tibet. All the abbots and many other learned teachers were there. Kyabje Khunu Lama Rinpoche went there and His Holiness organized for him to explain the teachings to them. His Holiness Zong Rinpoche the ex-abbot of Ganden Shartse Monastery, the great monastery university in Tibet, and many learned ones  were also there. So Kyabje Khunu Lama Rinpoche gave explanations from the Buddha’s teaching, the Kangyur.

He lived in India with the sadhus on the river Ganga in Varanasi. The sadhus helped him, offering him food and taking care of him, so he dressed like a sadhu. Then he came to one Tibetan monastery in Bodhgaya. At that time, there were maybe Buddhist monasteries from Japan and other countries, but not Tibetan. There was just one Gelug monastery, in Lama Tsongkhapa’s tradition. Now there are many, but at that time there was only one Tibetan monastery.

When His Holiness went to Bodhgaya, Kyabje Khunu Lama came. He looked just like a sadhu, so the monks of the monastery didn’t recognize that he was a great bodhisattva, a great scholar, an unbelievable scholar of the Buddha’s teachings. They didn’t recognize him; they thought he was just a sadhu or something. He asked for a room but monks didn’t give him one, so he slept outside on the cement floor of the monastery.

His Holiness the Dalai Lama was inside the monastery. The next day, His Holiness took the extensive commentary of the Bodhicaryavatara, A Guide to the Bodhisattva’s Way of Life, composed by the great bodhisattva, Shantideva, the great Indian holy being, the pandit from the great monastic university, Nalanda. After His Holiness took teachings from Kyabje Khunu Lama, he very soon became known. Before that, nobody knew him. [Rinpoche laughs] Then he quickly became very famous.

Outside the monastery there was a two-storied building, a guest house where all monks of the monastery were living. They lived there because His Holiness the Dalai Lama was coming. There was a temple and outside the garden gate, there was a two-storied guest house. Khunu Lama Rinpoche stayed upstairs in the middle room, I think. Anyway, sooner or later all the people, everybody, lined up outside Rinpoche’s room. The steps down from his room were lined with people waiting to see him, to get a blessing or to get advice.

I had a little fortune to meet Rinpoche several times there and to receive teachings on the Lamp for the Path to Enlightenment, Lama Atisha’s teaching. He also gave a commentary on Bodhicaryavatara to many other geshes and lamas in his room, the takpa,1 which is very high in the building.

When he presented the Dharma, he taught all four Tibetan Buddhist traditions: Nyingma, Kagyü, Sakya and Gelug. There were many geshes from the Lama Tsongkhapa tradition and also from Nyingma and the other traditions in the audience, so when he talked about emptiness, he taught using Lama Tsongkhapa’s teaching, but also the Nyingma, Kagyü and Sakya traditions’ teachings. He presented the teachings individually like that.

I requested a commentary on the Bodhicaryavatara, but Rinpoche did not accept; instead he gave the oral transmission. I was requesting it just to do it myself. So Rinpoche gave the oral transmission in his room for maybe two days, I’m not sure, in the afternoon. I stayed awake through the transmission until he reached the ninth chapter on wisdom and then I immediately fell asleep. This chapter is supposed to be the most difficult one to understand, and the minute Rinpoche started to explain the commentary on the wisdom chapter about emptiness, I fell asleep! [Rinpoche laughs]

Now there are many translations of Bodhicaryavatara but at that time there was only one, by somebody from Sikkim, Gadze Dawa or somebody, who had studied English at school or university, I’m not sure. So Rinpoche told me, even though there was already a translation, that I should learn English well and learn the text, and then translate it into English. Even though there was already a translation, Rinpoche thought I should do this, although so far it hasn’t really happened. Hopefully in the future, sooner or later it will happen. So Rinpoche was very, very kind to me.

When Rinpoche came to Nepal I received teachings on the Lamp for the Path to Enlightenment in a monastery down there, then here with our Western students and Sangha. At that time we had many Sangha, it was the first explosion of Western Sangha. I brought the students to Boudhanath to see Rinpoche and we took teachings on The Foundation of All Good Qualities and The Hundred Verses of Advice, a text by Padampa Sangye, a great Indian yogi who lived during Milarepa’s time. Padampa Sangye went to Tibet and visited Tingri, where he gave a hundred verses of advice to the people there. It’s a very good text. We took the oral transmission of that from Rinpoche.

I think that might have been the last visit. Then Rinpoche gave us some fruit. On the table there was fruit, la dak, kung pu. What’s it called?

Rinpoche: Apricot, yeah. He filled the bottles [?] under the table and gave some to me. Rinpoche gave advice to the monks here at Kopan. We didn’t get to eat, but anyway Rinpoche gave the advice that the monks should subdue their minds. Anyway, I cannot subdue my own mind, so how can I subdue theirs? I think that might have been the last visit.

1 This may refer to the room at the top of the Mahabodhi stupa in Bodhgaya. Rinpoche has alluded to this in other teachings where he has given Khunu Lama Rinpoche’s story. [Return to text]

Taking Care of Ourselves
Mindfulness of Emptiness in Daily Life
Nothing is Definite in Samsara
Kopan Course No. 43 (2010)
Commentary on "A Lamp for the Path to Enlightenment"
Commentary on "The Foundation of All Good Qualities"