Nothing is Definite in Samsara

Kyabje Lama Zopa Rinpoche gave this teaching on the first of the six types of suffering at Kopan Course No. 43, held at Kopan Monastery, Nepal, in Nov-Dec, 2010.

This is an excerpt from Lecture Eight of the course. Lightly edited by Sandra Smith. 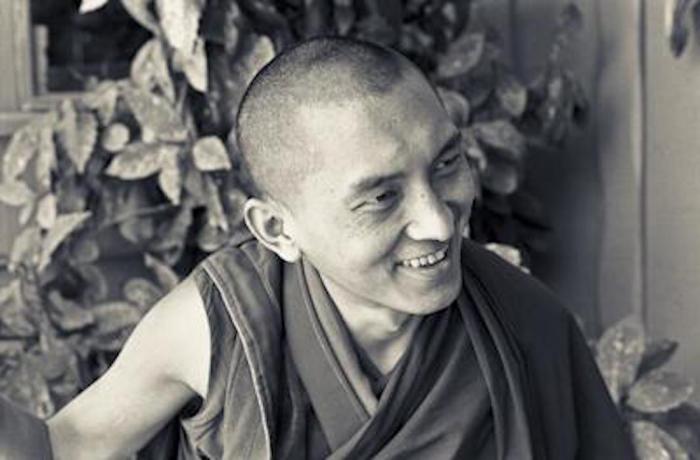 Until we are liberated from samsara we have to continuously experience the six types of suffering. The first is that nothing is definite in samsara.

It’s very interesting with family members. Maybe I’ll tell you this story first. You might have already heard this, but anyway I just want to remind you. I think it was Shariputra, who saw a family when he went for alms. The father used to catch fish from a pond behind the house and eat them. When he died, he was reborn as a fish in the pond. Usually fishermen—people who live off fishing—will be reborn as fish so many times and then somebody catches them with the same technique. Then they can’t escape. Even before they die, even before the consciousness leaves the body, they experience the body being cut in half. They have the same experience as what they did to others. I think that happens many times. All those fishermen experience so much of that.

We have all gone through that experience of being fishermen and catching fish, then being born as fish and being caught by somebody else. We experience the karmic result of what we did to others in the past. We experience it—those fish are caught, hooked and they have no way to escape. It’s the same.

Anyway, the father was born as a fish in the pond after he died. The mother was attached to the house, so she was born as a dog of the house. The family’s son had an enemy, who had a physical relationship with the son’s wife. I’m not sure, but he was attached to the wife and he died with attachment to the wife. After the enemy was killed, he was born to that family, to the son’s wife. After the enemy was killed, he became their child.

Shariputra saw this and said, “Eating the father’s flesh, beating the mother…” I’ve got some words, but they may be different from the text. “Eating the father’s flesh, beating the mother, carrying the enemy that was killed on the lap. I laugh at samsaric existence.” So, you see, it has totally changed, totally changed. That story is not only about them, not just this family, but about everybody. We have all been dogs and cats; we’ve all been farmers who have cared for cows.

I think one time at Solu Khumbu, when I was coming down to Lukla, we stopped to see a benefactor. The old mother was walking outside as we were leaving. There was a young calf next to her who suddenly got up on its hind legs and put its fore legs on her shoulders from behind as if it was trying to have sex with her. That sort of shows it could have been her husband in its previous life, still with an imprint of the past relationship. That’s why the calf stood up like that. Like that story, it’s the same for us. We change from one life to another completely like that. That’s the evolution of samsara.

The evolution of samsara is very frightening. Once it changes we don’t see what was before. The son was unable to recognize the incarnation who was born to them as the enemy and so he cherished that child. The mother was born as a dog but the son couldn’t recognize her and so he beat her with a stick. Then the fish that she was eating, chewing the bones of, was her husband, but she couldn’t recognize this.

When we have a child, we cherish that being, but before, in a previous life as a dog or cat or whatever, we didn’t cherish it. We didn’t think, “This is ours,” and if it got sick we weren’t unbelievably worried, thinking, “My child is sick.” We weren’t worried and crying and all that. Before that child was born to us, we didn’t do that, we didn’t feel that. Only after they died and then were born to us, do we think, “My child, my this,” with all the constant worry. There’s so much unbelievable attachment and we are always worried about our children.

Once when I was in Singapore I met a rich Indian family with some of their friends. The mother asked me, “Please pray for my daughter to get married.” She wanted her daughter to get married very quickly. The mother couldn’t wait, she was so worried. I said, “It’s better to wait and be more careful.” I don’t remember whether I mentioned the other parts to her or not. Maybe I didn’t want to frighten her. They never think there will be problems; they only think of the marriage, they wait for the marriage, and, of course, the wedding.

There are two things here in Nepal, the people blowing those things which are part of the wedding, with the wife and husband being carried or sometimes going in a car, then some people play music, with drums and things. Anyway, that’s for simple people; the rich ones do much more. That’s one time, the wedding. Then what’s the next one? What I think is that with weddings it’s like this. Playing music, that’s one thing. When I hear that, it reminds me that the next time [they hire a band] is when they die, when the body is carried to the cemetery, and again people play music or something. Not all Nepalese, but some people do that.