New Books in the Pipeline

We are putting the finishing touches to two new books by Lama Zopa Rinpoche. One is the next book (after Heart of the Path) in our Publishing the FPMT Lineage series of lam-rim commentaries: How to Practice Dharma: The Shortcomings of Desire—Teachings on the Eight Worldly Dharmas, edited by Gordon McDougall. This is drawn from all of Rinpoche's teachings over the past four decades and based on Rinpoche's famous extended teaching on the eight worldly dharmas during the sixth Kopan course in the spring of 1974. You're not going to want to miss this amazing book. It will sell for $15 and will, of course, be sent free to all our members.

Along with that we are also planning to publish Lama Zopa Rinpoche's Heart Advice: Bodhisattva Attitude, which we told you about and excerpted in last month's e-letter. Edited by Ven. Sarah Thresher, this contains Rinpoche's recent (the last three years or so) essential teachings on making our lives highly meaningful with bodhicitta and marks the beginning of our new Heart Advice series, Rinpoche's essential teachings on key topics given in recent years. This book will be free and will be sent automatically to all our members and benefactors.

Also, we have been working with Wisdom Publications on a small book of pithy teachings by Lama Yeshe, When the Chocolate Runs Out, which will be a companion to Wisdom's recent How to Be Happy, by Lama Zopa Rinpoche. This will also be sent free to all our members.

So, this is a great time to become a Lama Yeshe Wisdom Archive member if you're not already one. This summer, LYWA members will be getting a great present of three new books!

If you can't become a member, please consider becoming a benefactor so that you will automatically be sent all our free books as soon as they're published. In addition to Bodhisattva Attitude we have many more free books in the pipeline.

What's New On Our Website
We are in the process of posting the recordings of Lama Zopa Rinpoche's lectures from the 33rd Kopan Course in 2000. In these lectures Rinpoche gives teachings on emptiness, and oral transmissions of the Heart Sutra and Diamond Cutter Sutra. The first couple of days have been posted; many more are to come so keep checking back!

We have also posted a complete update to Rinpoche's Advice for Daily Practice. Rinpoche is often asked for advice regarding which practices should be done daily and this posting includes Rinpoche's detailed suggestions for establishing a daily practice. This advice was originally compiled in 1999, and was added to extensively this year.

Rinpoche's advice to FPMT projects regarding their logo has also been completely updated.

Rinpoche's Online Advice Book: New This Month
Ever wonder how you can easily find all the new advices added to the online advice book? We've just added a feature that enables you to find all new advices posted in recent months. Visit any Advice Book page and look for the new pull-down menu on the right. Choose any month to see a listing of advices added for that month. We hope you like it!

Advices added in March include: what to do in order to not be afraid at the time of death, and what is the best way to help a dying person. You can also read Rinpoche's extensive advice on guru devotion, and more. Be sure to use our new feature described above to see the complete list of advices added this month.

Pujas
We have arranged for Praises to Tara to be said daily for a year, beginning on the Day of Miracles, for the benefit of all our members. Thank you so much for your kind support.

This month we leave you with an excerpt from Adele Hulse's massive official biography of Lama Yeshe, Big Love, which we've been editing for well over two years and will be published next year. Follow the link at the bottom of the page to read more from this chapter, and from other chapters as well. 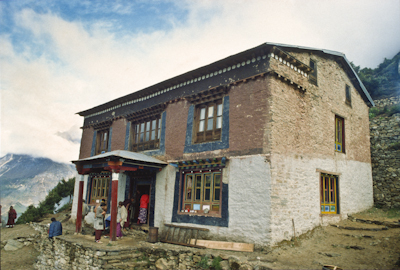 One day a telegram arrived at Joyce's house. At first Piero thought it was from some Dharma hippie. "It read something like, 'Your compassion is beyond the limits of the mind. At this time I think I have to meditate, so I cannot come to teach on the courses in Europe. Anyway, Piero is with you and he can teach as well as I can.'" It was signed, "Zopa."

Piero Cerri: "I couldn't believe it really was from Rinpoche. I didn't want to show it to Lama but later, when we were in the taxi going to Oxford Street, I read it to him. As I read it out the meaning became clear to me, because Lama was repeating the words and stopping all the time. Then I realized. 'Rinpoche says he wants to meditate,' said Lama. He didn't budge an inch. He was unsurprised and totally cool, but it was a serious thing. We had courses booked at Manjushri Institute, at Istituto Lama Tzong Khapa, in Holland and in Spain. All the advertising had already gone around and the airline tickets were arranged. Rinpoche backing out was a major upset. Lama went off to his class and sent me off to send a telegram. The tone was like, 'Yes, I understand. But this time everything is ready and you have to come. So, please come.' It was very well written and not heavy and I had to send it 'most urgent', which cost UK£40 back then.

"Later Lama said to me, 'Lama Zopa is not playing games. In reality he is putting himself down as the lowest of the low.' He told me once that whoever doubts Rinpoche doubts him."

The telegram was delivered to Kopan where Jacie Keeley received it. Peter Kedge was in India, having left instructions that if Lama Zopa didn't return from Lawudo by a certain date, Jacie would have to go up and fetch him back.

Jacie Keeley: "That date came and went. I was facing a difficult situation, so I went to see Serkong Dorje Chang at Swayambhu. He made observations with the dice and said, 'If you don't get Lama Zopa now, you will never get Lama Zopa again.' I borrowed money from Marcel and hired a helicopter.

"The sky was terribly overcast until we swerved and the clouds opened like the Red Sea. We landed below Lawudo Gompa, because there was no place to land beside it. I ran up the path to the cave, still weak with hepatitis and with the pilot shouting from below, 'Run faster, the clouds are coming!' I got to the top and there was Rinpoche. He said, 'Didn't you get my letter? I'm not coming this year.' I told him that I didn't know about the letter and that he didn't have to come if he didn't want to, but then he said, 'Let me make some observations.'

"The Sherpas packed Rinpoche's things, grabbed some food and a thermos and raced down to the helicopter. By the time we got there they had a little folding table and a chair set up so Rinpoche could have a cup of tea. He had to sit down, drink the tea and get into the helicopter. There he sat, not looking at anybody. Rinpoche's mother and sister were hanging off the helicopter, tears pouring down their cheeks. They only let go at the last moment.

"We got to Kathmandu safely and when we were in the taxi Rinpoche told me, 'I have never prayed so hard in my life not to have to go to the West. But the whole time I was making these prayers I could feel there were stronger prayers being said and that mine wouldn't work.'" Rinpoche said later that just before the helicopter arrived, which was at the end of his morning session, a vision of a row of Westerners appeared in front of him, chanting the first line of the dedication prayer, Ge wa di yi nyur du dag ("Due to the merits of these virtuous actions…"). He thought this meant that his retreat was probably over. He also commented that Jacie had been very respectful in the way she presented the situation to him.

Jacie stayed on at Kopan with Karuna Cayton, Maureen O'Malley and the boys throughout the summer monsoon. Every day she trudged up the hill from Chötak's house, through mud and leeches and pouring rain to endless meals of potatoes—boiled, fried or mashed. Monsoon food. She repainted the office, added bright cushions and taught the boys basic geography, so they could know where their lamas were in the world.

"Americans are so insulated. Even though I was a college graduate I told them that Greece was an island. I showed them a picture of downtown Chicago in rush hour and asked them if they had ever seen anything like that before…and they said, 'Yeah, Asan Tole!' In their minds flashy cars were the same as ox-carts, goats and box-wallahs," said Jacie.

When Lama Yeshe met up with Rinpoche again in Europe he told him, "Even your breath in the West gives benefit." This is similar to what people used to say to Lama Tsongkhapa.

Edited by Ven. Connie Miller and Nick Ribush. You can read the rest of this chapter, and drafts of other chapters as well.