Welcome to our latest e-letter. As I mentioned last time, if you've missed any of the previous ones, you can read them here, where you can also sign up for the e-letter on that page. If you know people who might be interested in receiving it, please forward this message to them. Also, if your center has an email list, you're welcome to forward this e-letter to it, or post it on your website.

We have been appealing for funds for the anthology for some time now, and many people have kindly responded. Thank you all so much. For more information, please go here to see how you can receive a gift of a rare, long out-of-print, collector's item for contributing to the publication of this wonderful collection of teachings.

Recently I was asked to represent Lama Yeshe at the wedding of somebody he had helped a great deal. This was clearly an impossible task, but as I had been asked to say a few words, I searched the Archive for anything Lama might have said about marriage. I found a few things, and read a couple, which you will find below. See the others on our website. We have also put up three other teachings recently, which you will find under “Latest News” on our home page, www.LamaYeshe.com.

Thank you so much for your support of the Lama Yeshe Wisdom Archive. Please let us know if there is anything we can do for you.

SOME THOUGHTS ON MARRIAGE AND RELATED TOPICS 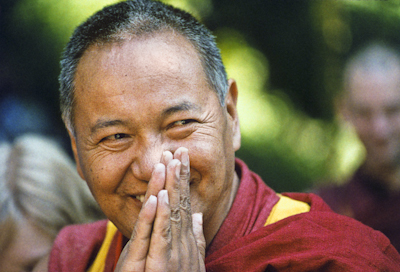 These days, one of the main reasons that a man and a woman become friends is sexual. They get together for sexual pleasure. In earlier times, marriage had a divine quality-a couple came together out of respect, with the aim of creating a kind of totality. That gave meaning to getting married, and marriages made with such purpose became good ones.

Many of today's marriages become disastrous because they lack purpose; there's no worthwhile goal for coming together. A couple should not come together out of grasping at each other; there should be more meaning to it than that. But our craving desire and lack of wisdom work together to create an extreme situation that finishes up causing conflict: the woman agitates her man; the man agitates his woman-in either case, it ends in "goodbye."

These days, I travel the entire world and many young people come to see me to discuss their relationship problems, but they all boil down to people's coming together out of the wrong motivation. Whether you're a man or a woman, it's important that there's not too much grasping in your relationship, that you don't agitate your partner. Extreme grasping at sexual pleasure is a problem; sexual pleasure is an irritant. You can see.

However, many couples aren't together for the sex. Their relationship is deeper than that, so their attitude is different. They are very comfortable, free, somehow, with no tremendous expectations of each other. Therefore, they have a good relationship. I'm sure you've seen examples of such couples, where there's not much grasping. In my limited experience of the Western world, many Christians, who believe in God, have very respectful marriages. They believe in something deeper than themselves and are not living for sense pleasure alone. I would say that such couples have been blessed by God or Jesus.

Of course, many people these days believe that Coca-Cola is better than God. "What's the point of religion?" they ask; "Coca-Cola is more refreshing than God or the Bible." This is their problem. What to do? I'm joking!

Question: Lama, many people have problems with their marriage.
Do you have anything to say about this?

Lama: Do I have anything to say? Yes! They don't understand each other. They lack good communication. That creates many problems. Many people, especially young ones, marry for very superficial reasons: "I like him; let's get married; I like her, let's get married." There's not much thought given to how they're going to spend their life together or much analysis of each other's personality. People are too influenced by external appearance; true beauty lies within. People's faces and behavior are constantly changing; you can't rely on them.

Because we lack the knowledge wisdom to understand each other's inner, human qualities, we easily disrespect our partner. When things don't work out as planned, when our partner no longer appears attractive, our marriage fails. That's because it was built one hundred percent on ego; it was totally an ego-based relationship. No wonder it didn't work.

A marriage built on mutual understanding, good communication and sincere efforts to help each other has a much better chance of lasting. Mental communication is much better than physical. That is very important. Superficial relationships, those based on mainly external factors, never last. Let's say a couple buys a new piece of furniture. The husband says, "Put it here," the wife says, "No, put it there," and a huge fight ensues. Here, there, what difference does it make? It's foolish and narrow-minded, but that's how things go.

Lama Yeshe during a public talk in Los Angeles, 1975