I hope you are well. Thank you for reading our monthly e-letter. Please forward it as you see fit.

Here at the Archive, thanks to your kind and generous support, for which we are always grateful, things are going well. 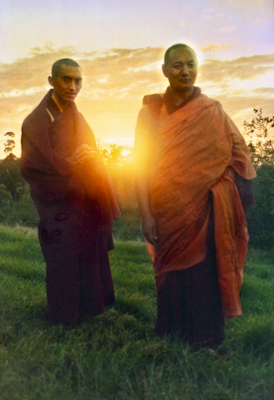 Publishing the FPMT Lineage
I would like to thank all those who responded to our special appeal a few weeks ago. This is a very important initiative for us and we obviously need your help. All the information is there so I won’t say more about it here.

New DVD and Online Audio
Our new Lama Yeshe DVD, Bringing the Dharma to the West, is now in stock. In these two great interviews, Lama Yeshe explains how he and Lama Zopa Rinpoche began teaching Dharma to Westerners and how and why the FPMT began. We look forward to sending it to you.

You can listen online to the first three days from Lama Zopa Rinpoche's 8-day series of lam-rim teachings given in Guadalajara Mexico in April 2008. The unedited transcript is included, and the remaining days are being worked on now. You can also listen to the public talk that preceded this series.

Thanksgiving
If it’s not too late, please consider practicing compassion and mercy this year and sparing the life of a turkey. Here are a couple of things to think about, one from Lama Zopa Rinpoche, the other an underground investigation. Thank you.

So, that’s not harming. If you would also like to help animals, you can very easily offer them free food and care by simply clicking on a button at the Animal Rescue Site.

Long life puja for Lama Zopa Rinpoche
The annual long life puja offered on behalf of the centers, projects, services and students of the FPMT to our most kind and immeasurably precious Spiritual Director, Lama Zopa Rinpoche, source of our inspiration and guidance, will be offered at Kopan Monastery on Dec 7th, during the annual one-month course. If you would like to contribute, you can do so here.

The fate of Tibet
As you may know, a huge meeting of Tibetan exiles just took place in Dharamsala to discuss the way forward. On Point Radio has just had an interesting show about the future of Tibet.

Thank you again for your kind interest and support. This month we leave you with an excerpt from a book that we hope to publish soon, Lama Zopa Rinpoche’s Teachings from the Medicine Buddha Retreat. 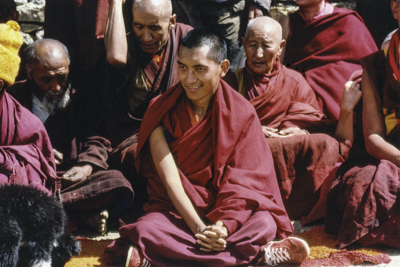 I think that this Medicine Buddha retreat has happened at the right time. There’s now a great need for it. Medicine Buddha practice is the most beneficial thing to do, and there is so much power in doing group practice. I had heard that many people praying together in a monastery has much more power than one person praying alone. I then saw in a thought transformation text by a Kadampa geshe (though I don’t remember which Kadampa geshe it was) that people doing prayers together has more power to bring success than one person praying. Here in this retreat, we are being given the chance to pray together, which is very powerful for our own development, as well as for the effect on the world.

The great enlightened being Pabongka Dechen Nyingpo said that in such a degenerate time Medicine Buddha and Heruka are two very precious deities to practice. When the time is very degenerate, with an explosion of the five degenerations, delusions become stronger and harder to abandon. The degeneration of sentient beings means that they are more and more thick-skulled and more and more difficult to subdue. The degeneration of time means that there are more wars, sicknesses (with new diseases coming) and so forth. The degeneration of life means that the life span is becoming shorter and shorter. The degeneration of view means that people very easily believe wrong views and find it difficult to believe the right view. Only a small number of people believe in karma or understand emptiness. There are four schools of Buddhist philosophy, each with a different view in regard to emptiness. The real, unmistaken view is that of the Prasangika school, but those who hold this view are very small in number. It’s only by realizing the Prasangika school’s view of emptiness that you can cut the root of samsara. With realization of the views of emptiness of the other schools—Vaibhashika, Sautrantika, Chittamatra or even Svatantrika Madhyamaka—in reality you can’t cut the root of samsara. It is only by realizing the Prasangika view that you can cut the root of samsara, because the root of samsara is of only one type: a very subtle wrong concept. There’s no mention of subtle wrong concept in the texts—I’m just expressing it this way. In terms of wrong concepts, there are other grosser ones.

After explaining all the inconceivable benefits of practicing, praying to and reciting the name and mantra of Medicine Buddha, Buddha then asked Ananda, his attendant, “Do you believe this?” Ananda replied, “Yes, I believe it. I believe what Buddha has said about these benefits because Buddha has inconceivable qualities, including omniscient mind, which can see everything.”

If you recite this mantra as a daily practice, all the buddhas and bodhisattvas will always pay attention to you and always guide you. Vajrapani, Owner of the Secrets, and the four guardians will also always protect you.

As mentioned in the Medicine Buddha sutra, if you practice Medicine Buddha or simply make an offering to Medicine Buddha, all twelve leaders of the groups of the entourage, who are like protectors and each of whom has an entourage of seven hundred thousand, will protect you. Through that all your wishes are then fulfilled.

Also, all your negative karma is purified. All sicknesses and spirit harms are quickly pacified. When someone is in a lot of pain that is difficult to control, if a Medicine Buddha puja is done in a monastery or somewhere else, the person will either recover or peacefully pass away, so that they don’t have to continue with all that pain.

Also, all your wishes are fulfilled.

Some years ago in Taiwan, George, a man I met when I went to Taiwan for the first time, gave me a Medicine Buddha statue to fill. He was the only person that I talked to about Dharma on that first visit. I talked to him at the airport, when I was leaving. Because of laziness I didn’t get to fill the statue, but I asked Dr. Adrian Feldmann (Ven. Thubten Gyatso) from Australia to do it. Many people here know Dr. Adrian. He’s one of the elder Sangha and has been a fully ordained monk for many years.

I was in Taiwan about seven days, but nothing much happened at that time. I was kept hostage in a hotel by a Tibetan lama from Sera Je but then a layperson, who has since passed away. One idea was to start a Dharma center and another was to start a translation program in a place where it could be more successful financially. Westerners and others would learn the Tibetan language, and there would be a geshe to translate Dharma texts with the help of a Western professor who knew Tibetan. We had the idea to start these projects in Taiwan. The lama told me that the projects could happen, but something didn’t feel right, so I suddenly changed my plans. Of course, my changing plans is nothing new.

The next day everything was planned for us to go on pilgrimage to Master Hsing Yun’s large monastery in Kaohsiung. The lama had arranged the transport and everything else. With me were Merry Colony, Neil [Ven. Thubten Döndrub], who was my attendant at that time, and the translator. We were going on pilgrimage to meet the four great abbots of Taiwan and to question them about gelongma vows, as His Holiness had asked for this to be checked in Singapore and other countries. I also had some other Dharma questions that I thought to ask the abbots. Master Hsing Yun was to be the first abbot we visited, and we planned to go the next day. Somebody then came and talked for hours about that Tibetan lama. I then changed my plans in the middle of the night, and the next morning I left for Nepal instead of going on pilgrimage. At the airport before I left I talked a little bit to George about Dharma.

Also, it is very, very powerful to recite the name of each Medicine Buddha seven times. It quickly purifies all the heavy negative karmas collected during beginningless rebirths. One collects much merit and has a long life free from sickness. One is saved from the lower realms and is quickly able to achieve enlightenment.

Excerpted from Lama Zopa Rinpoche’s Teachings from the Medicine Buddha Retreat (held at Land of Medicine Buddha in 2001), edited by Ven. Ailsa Cameron, to be published by the Lama Yeshe Wisdom Archive in 2009.